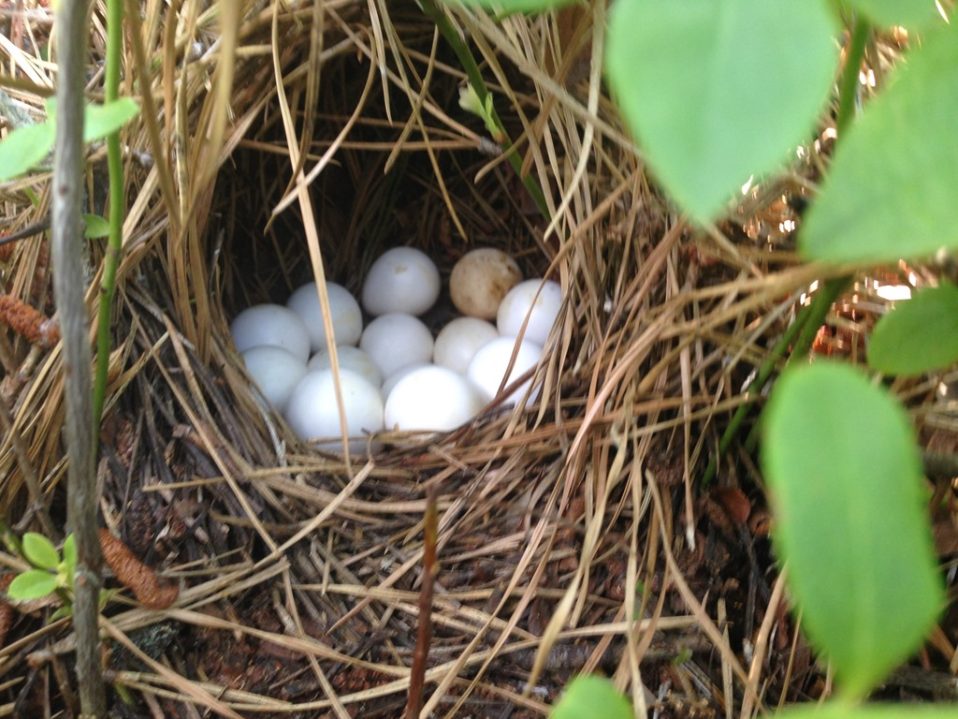 The first quail nest of 2017 was discovered by NJA’s researchers at the Pine Island Cranberry Study Site in Chatsworth, Burlington County. The nest, as well as three more discovered in June, marks the third consecutive year of successful breeding by the translocated birds; further evidence of a turning tide in Bobwhite Quail recovery in New Jersey.

“We have seen a substantial decline in quail and yet, with proper habitat management, we believe we can bring them back, which is why we are bringing them in to reestablish their population,” explained John Cecil, Vice President for Stewardship, NJA.

2017 marks the third year of release of wild Bobwhite captured from Georgia and translocated to the Pine Island Cranberry study site in Chatsworth, NJ. Since the spring release, the birds have been tracked via radio telemetry by researchers from the University of Delaware contracted by NJA. One exciting element to the radio tracking this season is that four 2016 released quail (that still have working radio collars) have been confirmed to have paired up with this year’s released birds! Additionally, one uncollared bird, which indicates an offspring from previous years, has also paired up with a 2017 released bird!

“We are working to create permanence with Northern Bobwhite in New Jersey,” said John Parke, Stewardship Project Director – North Region, NJA. “In reviewing the data collected over the last few years and seeing these wild birds adapt to their new surroundings and successfully nest is a testament to how important active management is to maintain forest health and wildlife diversity,” Parke said. “The Northern Bobwhite Restoration Initiative has implications for quail recovery in the Mid-Atlantic, is providing information on other species that use these same managed forest habitat, and is motivating others to implement forest management. We are excited by the progress of the project, the hard work of the project partners and collaborators and eager to see Bobwhite thrive again in New Jersey,” he added. Be part of this historic reintroduction and recovery of this beloved iconic species and support the Bobwhite Recovery Initiative!
Donate Now

Your ticket for the: Bobwhite Nest For Third Consecutive Year At NJA Pine Barren Study Site