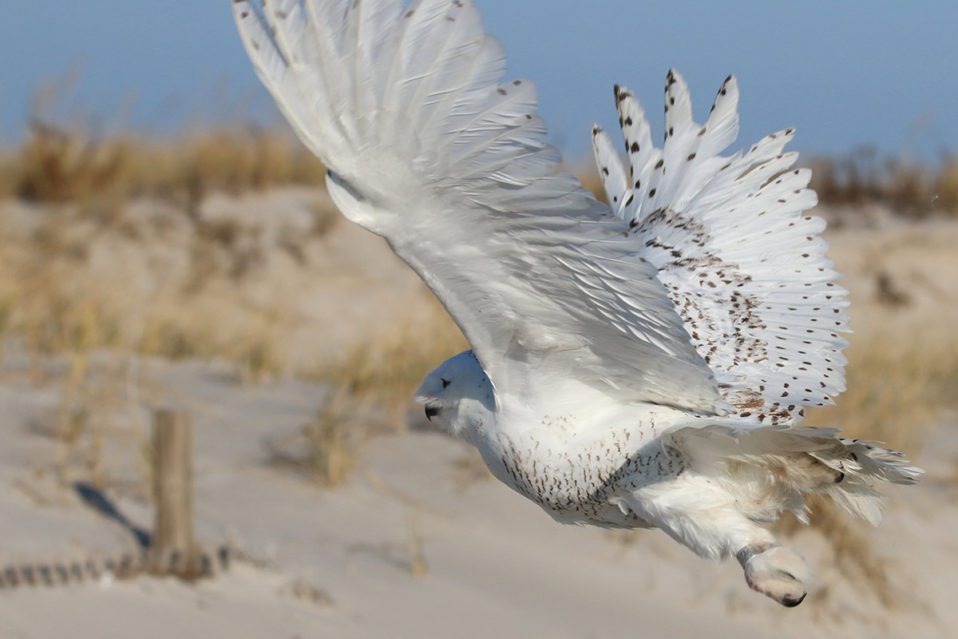 Snowy Owls in the Garden State

For over half a decade NJ Audubon Director David La Puma has been a partner in Project SNOWstorm. This incredible all-volunteer program studies and tracks snowy owls during their winter forays south into the Lower 48.

In 2014 New Jersey Audubon became a partner in Project SNOWstorm and has since committed to sponsoring one of the high resolution transmitters to be fitted on a Snowy Owl tagged in New Jersey. Despite the fact that many snowy owls have wintered in New Jersey, and even some of the transmitted birds have moved through the state, it wasn’t until the winter of 2017 that we were able to finally deploy “our” transmitter on an owl in the Garden State.

HERE’S AN ACCOUNT OF THAT EXCITING MORNING FROM CMBO DIRECTOR, DAVID LA PUMA:

Because we knew up to five Snowies had been present at IBSP, we wanted to capitalize on the opportunity to look at interactions between owls. Despite the high numbers of birds reported just a day earlier, on this morning they were few and far between. After an hour and a half of searching several miles up and down the beach we spotted a bright white owl perched atop a fencepost along a beach access road. This snowy was quite active and appeared to have hunted successfully the night before given the smudge of blood on its feathers near its bill and talons. After much waiting, Island Beach was captured, tagged, and released just as the sun rose above the eastern horizon, much to the enjoyment of a cadre of photographers that had gathered around the banding team leading up to and during the tagging process.

With our first Snowy tagged, we set out to hopefully find a second. Working with park personnel we scoured all of the sites where snowies had been seen over the previous week, to no avail. Bald eagles, Northern Harriers, and Cooper’s Hawks were moving over the dunes, as scores of Redthroated Loons headed south offshore. It was a beautiful day to be at Island Beach, but the one thing lacking from the landscape was the one thing we were looking for. After scouring the park once, we headed south as far as the driving-beach boundary and parked at the “no vehicles beyond this point” sign. Some of us scanned the dunes, while park staff and Mike Lanzone scanned the beach. “I’ve got an owl” Mike said to park manager Charlie Welch, and we quickly reassembled to see whether this bird was different from the one we tagged earlier. We drove into the restricted area, with park permission and escort of course, and determined that indeed this bird was new! We were elated, but of course still had the difficult task of capturing it and then determining whether it was large enough to be fitted with a transmitter. This bird proved much more difficult to trap, showing no interest in our intentions and preferring to roost right there on the beach instead. A runner approached from the opposite end of the beach, and while we tried to wave him off, he was oblivious to what was going on around him until the owl lifted off in front of him and flew up and over into the dunes. Cover blown, but knowing the snowy was safe from disturbance in the dunes, we decided to take a lunch break and return later in the evening when we hoped the bird would be more active.

That evening, our hunch paid off, and after about 30 minutes of being set up on the second owl he finally came in and was caught for banding. A quick weigh-in determined that we indeed had a bird that could hold a transmitter safely (the transmitter must be less than 3% of the bird’s weight). As the sun set, and the sky darkened, the team banded, measured and fitted the second owl with a new high-resolution CTT transmitter. We would name this bird LENAPE, after the native Americans who once inhabited Island Beach State Park, long before European settlers, but likely not before Snowy Owls. With only a sliver of horizon still aglow, Charlie Welch released the bird back into the wild where it flew off undoubtedly to find its evening meal among the dunes and marsh.

Both birds were well-fed juvenile males. Charlie Welch thought that made perfect sense. “We’ve got a big rabbit population here in the dunes, and the back bay is full of waterfowl”. We know from our Project SNOWstorm data that these coastal owls feed both on land and over water, so we look forward to what data these two birds can tell us about their preferences. Additionally, tagging two birds in close proximity gives us the opportunity to study the interactions between owls. Island Beach State Park is also a very popular destination for outdoor enthusiasts doing everything from birding to surfing, sunbathing, hunting and fishing.

HOSTING PART OF THE SNOWY OWL INVASION OF 2017 HAS PROVIDED PARK STAFF WITH A UNIQUE OPPORTUNITY TO REACH MANY DIFFERENT GROUPS AND EDUCATE THEM ABOUT THE IMPORTANCE OF THIS COASTAL HABITAT FOR SUSTAINING THESE BIRDS THROUGH THE WINTER, AS WELL AS PROVIDING UNIQUE OPPORTUNITIES TO SAFELY VIEW THESE BIRDS WITHOUT NEGATIVELY IMPACTING THEM.

So, where have Island Beach and Lenape gone since their tagging on November 29th? The map below shows the tracks of both birds, with Island Beach in red and Lenape in yellow. It’s safe to say that these Jersey Boys have been roaming since their initial tagging! As of late December both birds have covered much ground along the Jersey Shore, with Island Beach first heading north almost to Sandy Hook, before turning back south and rounding Cape May, stopping at Heislerville WMA, and eventually making his way back up the coast to North Brigantine where he is hunting the marshes by night, most likely for seaducks. Lenape, on the other hand, headed south almost immediately after being tagged, visiting and hunting Holgate and North Brigantine before spending the day near Margate on December 4th and being seen by NJ Audubon volunteer Carolyn LaMountain. Soon thereafter he too visited Cape May, rounding the point, and heading up to Heislerville WMA on the Delaware Bay shore. Instead of turning back, though, Lenape headed across Delaware Bay to Delaware where he worked his way down the coast as far as Ocean City, MD, before going north and taking up residence at Cape Henlopen State Park, just across the bay from Cape May!

Certainly, by the time you’ve read this article, both Island Beach and Lenape will have sent many more data points to the Project SNOWstorm database and you should head over to ProjectSNOWstorm.org to view the latest maps of these and all the owls being tagged this year. You can also revisit the tracks of owls tagged in previous years, and read about the cutting-edge research findings coming from these owls. All of these data are ultimately being used to better conserve this majestic species of the Arctic, an ecosystem which New Jersey Audubon has been working towards protecting for many years.

Your ticket for the: Snowy Owls