Cover Photo: Yellow-throated Warbler is a low-density migrant at Cape Island during spring and fall, and always makes for an exciting find at the Springwatch. This one spent a few minutes feeding in the pines near the count platform on April 2nd. Photo © Tom Reed.

The early and mid-April periods finally saw some nice weather, with fewer stormy and cold days and more spring-like warmth. Oh, and plenty of migrants!

The month opened with a good “echo” flight of 6,458 Northern Gannets following the previous day’s record movement for that species. The 2nd saw an obvious arrival of Laughing Gulls (a little behind schedule this year), and the spring’s first Yellow-throated Warbler created a little excitement when it dropped into the dunes next to the platform. Winds shifted from northwest all the way around to east on the 3rd, which produced a diverse waterbird movement that included getting-late singles of Razorbill and Horned Grebe. The 4th was a fairly quiet day with a return to strong northwest winds, and yet another big wind shift on the 5th – this time back to the southeast – produced another long list of waterbird migrants, led by an additional 6,265 Gannets. 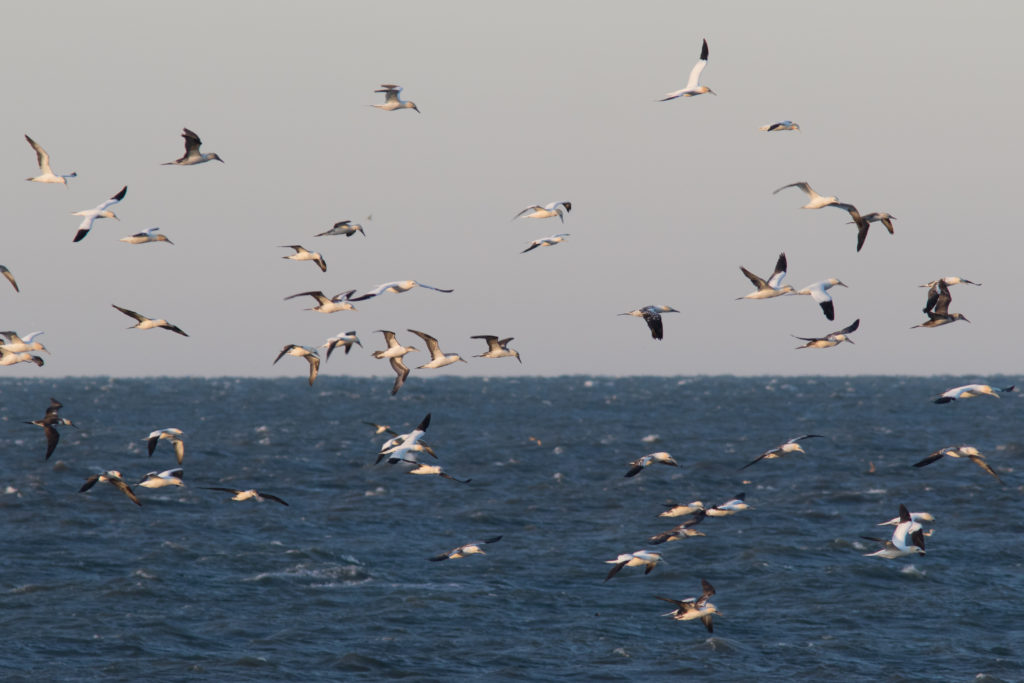 Northern Gannet numbers are steadily dwindling after a strong peak in late March. In this photo, we can see quite a few darker immatures mixed with adults. Immatures will make up an increasingly large proportion of the Gannets counted through the rest of the month. Photo © Jesse Amesbury.

Rainy conditions put a hold on most migration during the 6th, and continued easterlies and unsettled weather resulted in another slow morning on the 7th. Winds went back to the west and the sun returned on the 8th, bringing about a diverse flight over both land and sea that was headlined by new arrivals such as Little Blue Heron and Chimney Swift. The 9th signaled the start of a strong stretch of migration that would persist through the remainder of the period; over 8,500 birds were counted this day, including 3 early Parasitic Jaegers, 9 Blue-winged Teal, 2 Whimbrel, and 1000+ of both Surf and Black scoters. More sunshine and westerlies on the 10th meant lots more migration, with the season’s first Eastern Kingbird and 32 Lesser Black-backed Gulls among 4,000+ total migrants. The unsettled weather of April 7-8th produced an obvious influx of Lesser Black-backed Gulls at Cape May Point in the days that followed. Here, several fly past the Coral Ave. jetty on April 9th. Photo © Jesse Amesbury.

The hits kept coming on the 11th, with the Springwatch’s second ever Sandhill Crane making a brief appearance over Cape May Point, a flock of 58 White Ibis arriving from Delaware, and another Yellow-throated Warbler moving through the dune-top pines. Early-season songbird flights are never guaranteed here, but we enjoyed a fair movement on the 12th, with 13 Blue-gray Gnatcatchers, 17 Chipping Sparrows, 26 Palm Warblers, and 20 Pine Warblers moving through the dunes or over town. Common Loon migration finally heated up on the 13th with 100 on the final tally, along with the season’s first Orchard Oriole and another tardy Razorbill. In the non-bird department, we were surprised to see a White M Hairstreak among several other more expected butterfly species. The 14th and 15th featured continued movements featuring strong diversity and volume, with 5,000 total scoters between the two days, 168 Common and 991 Red-throated loons on the 14th, a slightly early Solitary Sandpiper on the 15th, and 161 Blue-gray Gnatcatchers on the 15th. Always a welcome sight, the season’s first Monarch butterflies were noted on the 14th, with 3 more seen on the 15th. It’s back! Cape May’s celebrity Iceland Gull has returned for another spring. Look for this beauty on the beach anywhere between Sunset Beach and Cape May City. Photo © Tom Reed.

Thanks for reading, and we hope to see you in Cape May this spring! The migration count at Coral Ave starts at sunrise every day and continues for at least four hours. To learn more about the Cape May Springwatch (and to view daily migration count totals), head over to our Springwatch information page. This project is made possible through the support of Larry & Judy Winne, Zeiss Sports Optics, and the Borough of Cape May Point, NJ.

Your ticket for the: Cape May Springwatch: Early-Mid April Summary