Invasion of the Sapsuckers! 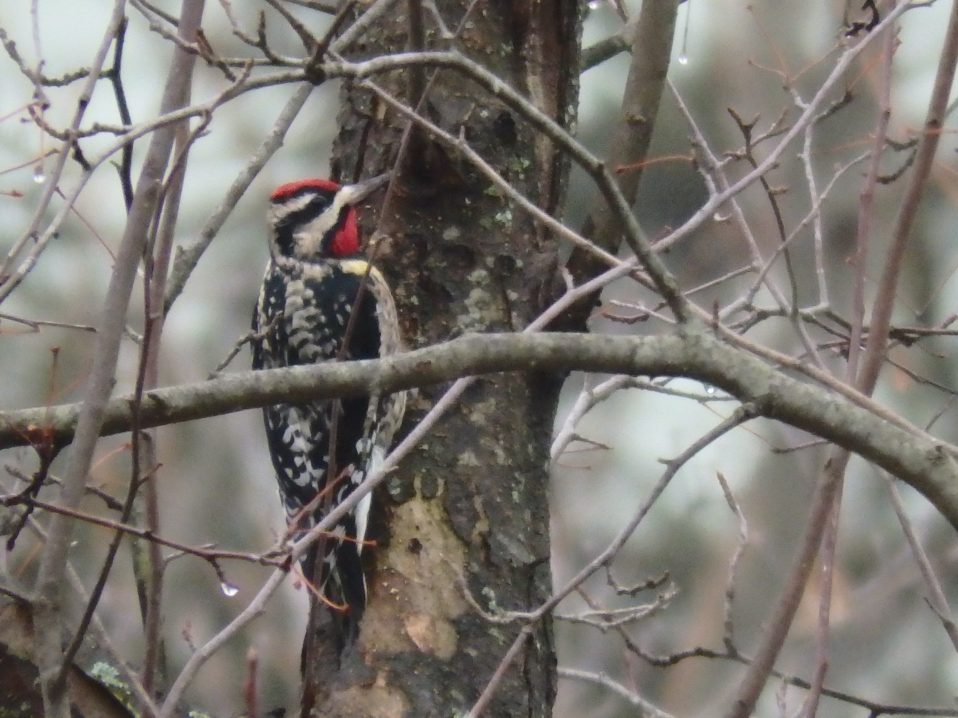 “There’s another one, that makes 12 today,” I said to my dad as I pointed to the woodpecker with the yellowish belly feathers, long white wing bar and all red forehead and throat patch scaling the old apple tree. “I saw 6 last week at the office (NJ Audubon’s Wattles Stewardship Center) and I have one at home that has taken a liking to a young holly tree in the front yard,” I informed my father. I was referring to the unusually high encounters this fall with a bird that as a child I thought was a fictional “spoof” species invented by Ed Norton from the Honeymooners, the Yellow-bellied Sapsucker!

The Yellow-bellied Sapsucker is a real live animal and it is becoming more common in New Jersey every year.

While most people may think that woodpeckers are non-migratory (and many of them are not), the Yellow-bellied Sapsucker is very much so! Females tend to migrate farther south than males and some can go as far as Panama. However, over the last ten years more and more Sapsuckers have been remaining throughout much of the winter in the southern part of their breeding range, which includes New Jersey. Formerly the species was an uncommon to somewhat common spring and fall migrant here in NJ and uncommon in winter. Now Sapsuckers have become a fairly common breeding bird in the northern part of the state and can be encountered state wide throughout the winter.

The Yellow-bellied Sapsucker gets its name from its ability to drill “sapwells” in trees with its beak. Basically, Sapsuckers make the sapwells to feed off the phloem sap, as well as on insects (mostly ants) that get stuck in it. The phloem sap is the nutrient-rich sap that flows down from the leaves towards the roots. Sapsucker sapwells are very distinctive and easy to identify. They consist of neatly arranged horizontal rows of shallow holes in tree bark usually around the trunk of a tree. The Sapsucker will drill two kinds of holes for sapwells. The first is a round hole that extends deep into the tree. These holes are used by the Sapsucker to probe for sap with its beak. The second type of hole is a shallow rectangular hole that is tapped regularly by the Sapsucker to allow for continuous flow of sap. Typically, new holes are made in a line with the old holes or in a new line of holes above the old holes. This drilling method maximizes the flow of phloem sap. By drilling a horizontal row of holes, the first sap leaks out but then thickens and clots blocking the downward flow of sap. The bird then drills a new row just above the old, where the sap is now under greater pressure since it cannot flow past the self-plugged first holes. Sapsuckers will often return to the same trees year after year. Photo by John Parke

Sick or dying (not dead) trees are also targeted by Sapsuckers as well as tree species with high sugar concentrations in their sap.   Sapsuckers have been documented to drill sapwells in more than 1,000 species of trees, however they do show a preference for maple, birch and fruit trees.

Unlike most woodpeckers, Sapsuckers favor edge habitat and young forests. Areas that are regenerating from disturbance (like storm damage or a timber harvest) are especially good areas for Sapsuckers. Since the birds spend half their time, or more, tending to or feeding from sapwells. Younger trees are preferred because they are easier to tap for sap. During winter they are not as selective and can be found in a variety of forest types, from bottomland hardwoods to forests of hickory, oak and pine high on a mountain.

Yellow-bellied Sapsuckers are cavity nesters and choose many of the same tree species for nesting that they use for drilling sapwells. They also will perform territorial drumming by striking their beak into dead tree limbs but will also use man-made items such as metal street signs, chimney flashing, metal siding and even metal mail boxes! They are one of the only woodpecker species that you can tell its species just by the sound of the drumming pattern. The drumming is an irregular pattern of several rapid thumps followed by a series of slow rhythmic thumps. Yellow-bellied Sapsuckers are important ecologically in the landscape because of their ability to draw out sap on trees which other animals utilize. They are especially important as an ally for several other animals that dine on tree sap or insects that are attracted to the sap such as porcupines, squirrels, bats and other birds, including hummingbirds! In fact, Ruby-throated Hummingbirds time their spring migration in some regions of Canada to the arrival of Sapsuckers because of their reliance on the sap from the sapwells! The tree sap released by Sapsuckers from their sapwells in the northern edges of the hummingbirds breeding range makes for a great substitute for flower nectar!

For more information about benefits of young forests and habitat for species like the Yellow-bellied Sapsucker see: http://youngforest.org/

Your ticket for the: Invasion of the Sapsuckers!

Invasion of the Sapsuckers!