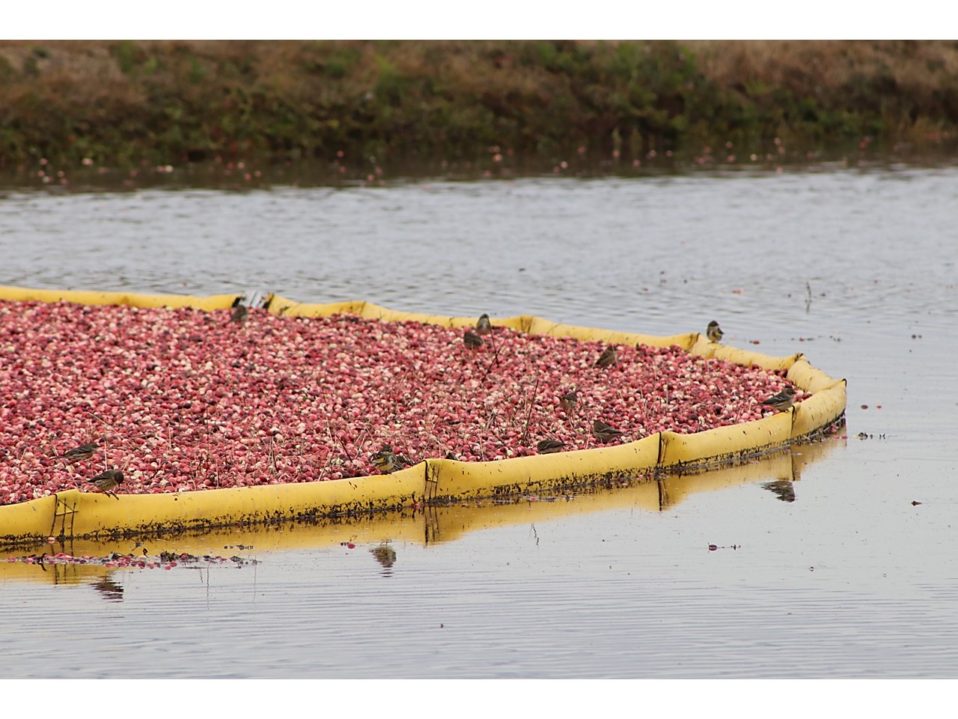 While touring the Northern Bobwhite Restoration Initiative study site, we stopped our tracking of the Bobwhite to watch cranberry harvest activities at one of the bogs. As the workers were waist deep in the water, moving the floating cranberries with the use of floating booms and large boards towards one side of the bog for collection, another “harvest” activity was also taking place alongside the workers. 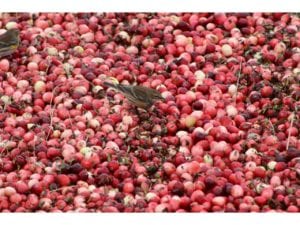 A flock of Yellow-rumped Warblers had landed on the floating cranberries to forage on spiders that were using the cranberries as life-preservers. Like tiny acrobats balancing on red balls, the birds paid no mind to the workers moving the cranberries, as each bird hopped from berry to berry picking off small spiders. One worker told us that this phenomenon happens all the time when they harvest; birds follow the workers from bog to bog as they flood each bog and harvest the cranberries. In fact, workers mentioned that it is not uncommon for “small birds” to land on their backs and shoulders as they work the bogs during harvest! 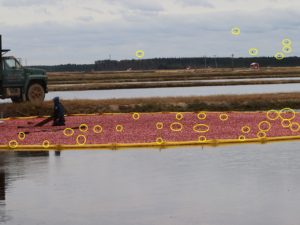 As we stood watching the harvest of cranberries, and spiders, it was one of those “WOW” moments when you realize you are watching a learned behavior in a species. Not only did the warblers learn that the cranberry harvest meant accessibility to a bounty of food, but they also learned that the workers and the booms and other harvest machinery did not pose a threat to them as they foraged …and in some cases the workers made for good perching spots for the birds to spy their next meal!

There are two types of behaviors in species, instinctive and learned. Instinctive behaviors are those that animals are born with, while learned behaviors are picked up through observing behavior by others or recognizing opportunities or threats and taking advantage of them. As with anything, as one practices these behaviors the more comfortable and experienced one becomes in performing the actions associated with the behaviors.

There are many examples of birds using learned behavior, especially when it comes to recognizing predators, nest building and foraging.  Mobbing (the behavior of flocks of birds attacking a predator to drive them away) is one example of learned behavior where young inexperienced birds soon learn to associated danger with mobbing activities and ultimately learn to recognize predators through this behavior.  The use of sticks to remove food from crevices by crows, or the dropping bait in water to attract fish by herons are also examples of learned behavior. Watching the warblers moving among the workers to glean the spiders from the cranberries also reminded us that the relationship between agriculture and wildlife is complex blend of cooperation and challenges. However, through sound agricultural management practices, a positive impact on wildlife conservation can also be made and have mutually beneficial results.

For more information about the Northern Bobwhite Restoration Initiative go to: https://njaudubon.org/success-stories/bobwhite/

Your ticket for the: A Warbler “WOW” Moment!!