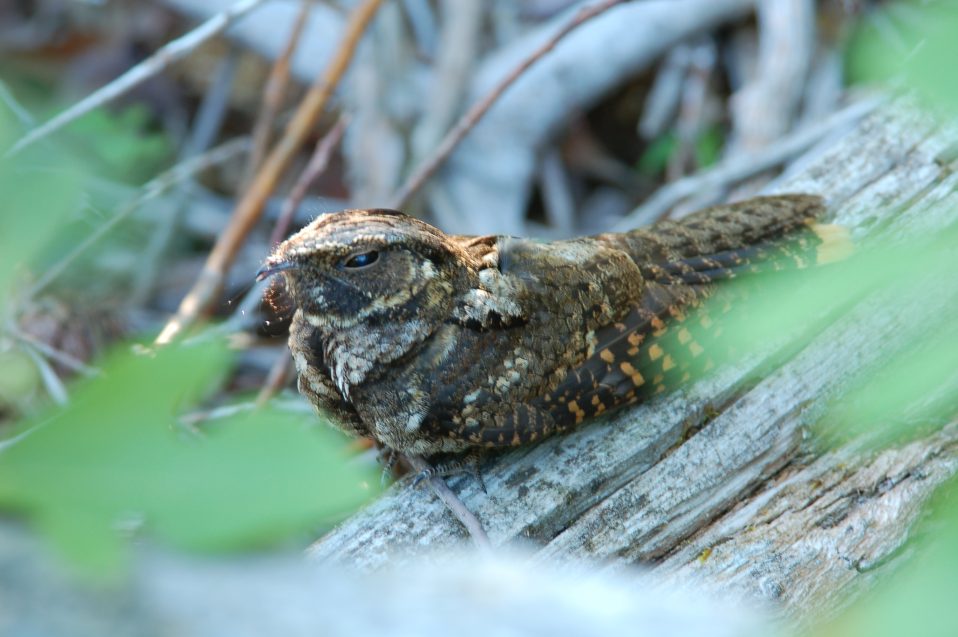 Since 2012 New Jersey Audubon, in collaboration with the USDA Natural Resource Conservation Service (NRCS), has worked to create young forest on private lands under the Working Lands for Wildlife (WLFW) Golden-winged Warbler (Vermivora chrysoptera) program. WLFW programs offer technical assistance and cost-share payments to landowners incentivizing habitat creation and has resulted in hundreds of acres of young forest habitat being created in New Jersey. While Golden-winged Warblers are the lead species for the program they are considered an umbrella species, meaning that management and protection for Golden-winged Warbler will also benefit many other wildlife species that make up the ecological community of their habitat. One such species, the Eastern Whip-poor-will (Caprimulgus vociferus; hereafter Whip-poor-will), is a nocturnal aerial insectivore that inhabits eastern forests and relies on young forests for foraging. Like the Golden-winged Warbler, which nests in young forests and then uses various forest ages with dense understories to rear their fledglings, Whip-poor-will also use older forests for roosting and nesting. Whip-poor-will, and many other wildlife species, depend on a variety of forest conditions across the landscape to sustain their life cycle. But across their range the eastern U.S. is dominated by even-aged older forests, and according to the 2020 Forest Inventory Analysis in NJ, 65% of stands are at least 60 years of age, while just 5% of stands are in the young forest age class. With less structural diversity on the landscape, it is no surprise that many species requiring more diverse forest conditions, like Whip-poor-will, are in decline.

According to the North American Breeding Bird Survey, Whip-poor-will have exhibited a 76% population reduction (-2.8%/year) across their range since the late-1960’s. These declines prompted New Jersey to list Whip-poor-will as a Species of Special Concern and regionally they are listed on the 2016 State of North America’s Birds Watch List, which includes bird species that are most at risk of extinction without significant conservation actions to reverse declines and reduce threats. Given their imperiled conservation status a better understanding of Whip-poor-will habitat requirements is needed to inform management and conservation. This prompted a collaborative effort between the University of Massachusetts, Antioch University, University of Pittsburgh, and Indiana University of Pennsylvania to evaluate how management is benefiting their recovery by conducting Whip-poor-will surveys across the eastern U.S. However, Whip-poor-will are most active at night during two, 2-week periods when moon illumination is brightest. Nocturnal timing means most Whip-poor-will surveys are conducted from roads making it hard to evaluate the benefits of forest management that occurs away from roads. Additionally, the brief survey window makes covering large landscapes through traditional bird surveys challenging.

To address these issues related to survey logistics, autonomous recording units (ARUs) can be used. ARUs are small recording devices that are programed to record noises at specific times of the day. ARUs are becoming an increasingly popular tool to use in ecological research and avian monitoring because of their relatively low cost, decreased time spent in the field, and the added benefits of a permanent data record and reduced observer bias. For Whip-poor-will surveys, using ARUs allows researchers to conduct surveys across large geographic extents and capture key singing periods for the species so they can evaluate the potential benefits of forest management. 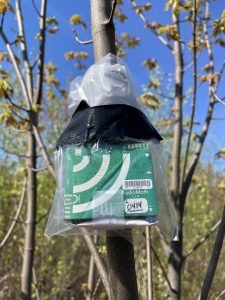 This past May, JT Larkin, a University of Massachusetts Graduate Student, lead a team of researchers that deployed 48 ARUs across 27 different properties within New Jersey’s WLFL Golden-winged Warbler focal geography. This work is part of a larger project funded by the NRCS’s Conservation Effects Assessment Project. In total, Larkin and his team deployed 520 ARUs across 11 states, ranging from western North Carolina to southern Maine. The ARUs were programed to record for 3 hours each day, 2 hours post sunset and 1 hour post sunrise. In June, the ARUs were collected from the sites and the data are now being downloaded and analyzed for Whip-poor-will songs using a machine learning classifier. This coming year the data will be analyzed to model Whip-poor-will occupancy as it relates to site vegetation and landscape scale characteristics. This research will provide insight into how WLFW partnerships contribute to Whip-poor-will conservation though the creation of young forest habitat. Additionally, Larkin stated “this research will produce habitat- and region-specific management recommendations for Whip-poor-will, while also helping fulfill the USDA-NRCS’s goal to assist landowners in creating healthy forests and high-quality habitat for threatened and declining wildlife.”

Your ticket for the: Assessing Eastern Whip-poor-will Response on Working Lands for Wildlife Young Forests