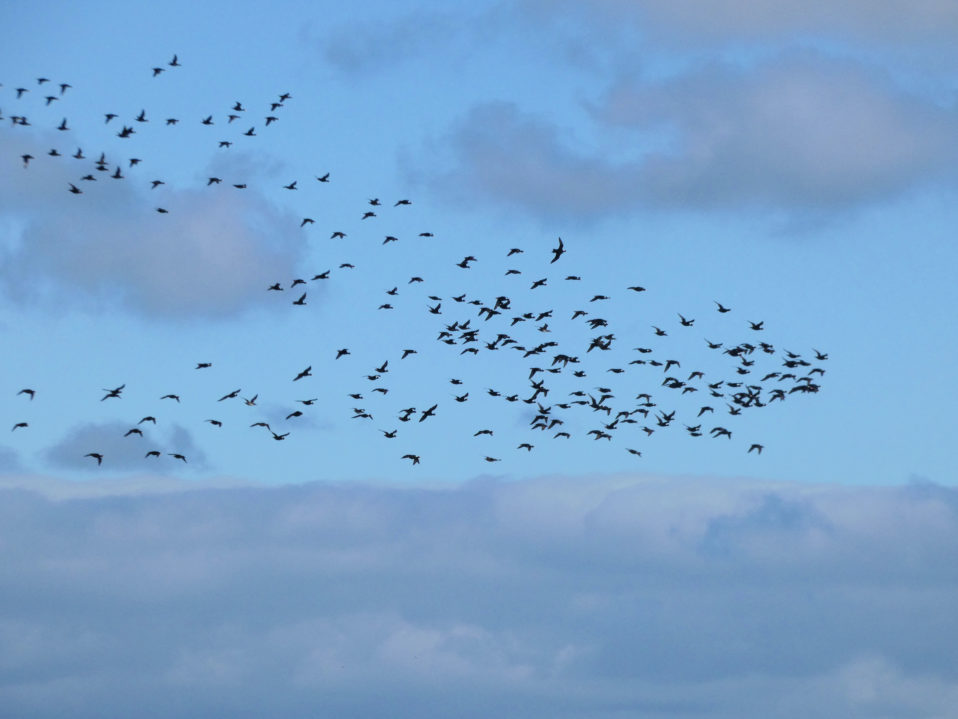 The front of a flock of Surf Scoter. The Surf Scoter movement on the 28th was spectacular, with most of the flocks flying close to the jetty allowing for the best possible views of these migrants.

This is the time of year we’ve been waiting for; the large flocks have started to arrive! It has been great fun watching the flocks pass through the past few weeks. Thanks to everyone who came out and helped me catch some of the birds I could have missed on the busier days!

The first notable birds for the past couple of weeks came on the 20th when a strong Southwest wind started. An immature Brown Booby and a Pomarine Jaeger both flew right off the jetty within the same hour! The Pomarine Jaeger was closely followed by a Parasitic Jaeger, allowing for an excellent comparison. Pomarine Jaeger is bulkier in size and has broader chest and wings, although there is some overlap in size between them and Parasitic. The standout features were the cap that extended below the beak and a bicolored bill, which is a dead giveaway for Pomarine. Both the Brown Booby and Pomarine are excellent birds to see from shore and were very exciting to see. 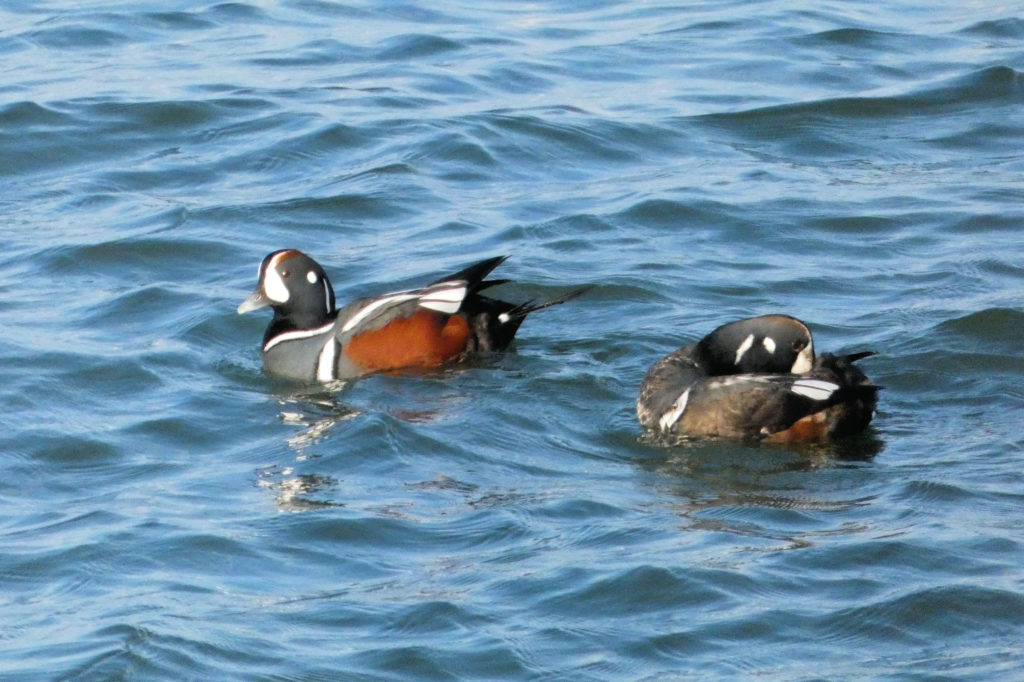 A stunning pair of male Harlequin Ducks dropped in by the jetty earlier than usual. The bird on the left is in full breeding plumage, while the bird on the right is not quite there.

The 23rd brought 12,930 Double-crested Cormorants, the highest single day count of the season. It also brought along a pair of stunning Harlequin Ducks that came in off the water and immediately sat down behind the jetty. These two birds were seen for the next several days, moving between the back bay and the jetty. A good diversity of non-scoter ducks continued from last week, with numerous duck species mixing into the large flocks of Black and Surf Scoter. There was an increase in Scaup movement this week as well, and on Monday the 25th, Tom Reed had 97 Ring-necked Ducks over the sea, which is unusually high as they are typically an inland migrant. Northern Gannet numbers have increased as well, with Tom seeing 1635 and 3888 on Monday and Tuesday, respectively. The first Long-tailed Duck of the season was spotted on the 27th, flying with a flock of Surf Scoter. This messy flock of Surf Scoters is easier to count at a distance; when the birds move down the coast, they are stretched out in what appears to be a line. After the flock is counted, the challenge is to identify the birds in the flock and if there are any odd ducks in the mix.

Now for the scoters! Black and Surf Scoters were moving in the thousands most days until Thursday the 28th. For the first few hours of the day, the scoter numbers were slow and it was an even mix of Black and Surf Scoters. Then around 11am, the wind shifted slightly to the Northeast and thousands upon thousands of Surf Scoters came down from the North just offshore and flew right along the jetty for spectacular views. They were so close that every bird in each flock could be seen clearly and could be identified. The main push went from around 11 to 2, and then the numbers slowed as the wind shifted slightly again. Overall, we ended up with over 22,100 Surf Scoters counted! And on top of that, 12,500 Double-crested Cormorants were moving that day as well. It was a wild but fun day, and the highest single day count of Surf Scoters in several years.

The next day brought a Nor’easter that churned up the water and blasted the Seawatch shack with wind, sand, and rain, but over 8,000 Surf Scoters still decided to fly. November 1st brought the first Bufflehead of the season, along with the first Redhead and 7 Long-billed Dowitchers, identified by Tom Reed. A group of Sanderling hiding from the wind behind the wrack line as swells go over the top of the seawall during the Nor’easter on the 29th.

The Ipswich Savannah Sparrow has been sighted in the dunes behind the Seawatch shack, so if you visit, keep your eyes peeled! There are also plenty of big days ahead of us, I hope even more of you can join us and witness these mass migration events!

See you out there!

Your ticket for the: Avalon Seawatch Update: October 20th to November 2nd