We are smack dab in the heart of raptor migration in Cape May. Hundreds of visitors time their vacations to be in Cape May during the middle of October. The biggest raptor flights are nearly guaranteed to occur in this time frame, and any bird found in the United States is fair game to show up as a rarity. And that’s exactly what happened!

The thing about raptor migration is that you have to take the good with the bad. The biggest migration spectacles occur after long periods of poor migration conditions such as very strong headwinds (out of the south or east) or rainy weather. Multiple days of bad weather causes migrating raptors to get backlogged, or bottlenecked to our north. Once conditions improve and are conducive for migration, the flood gates open and thousands of raptors begin moving south. That exact scenario happened when we had a long stretch of easterly winds, overcast skies, and rainy weather from October 9th to the 13th. Those days were quite boring on the hawkwatch as we saw very little each day. However; on October 14th, the winds blew out of the NW and the skies cleared out, giving way to abundant sunshine. And the birds of prey were not far behind. From sunrise to sunset, raptors were migrating overhead. By dark, 4,244 birds of prey were counted! The most in a single day since 2018! Sharp-shinned Hawks were the most numerous with 1,933 counted, and American Kestrels were a close second with 1,168 counted. Enduring those slower days were totally worth it when it means a 4,000+ bird day will follow shortly! 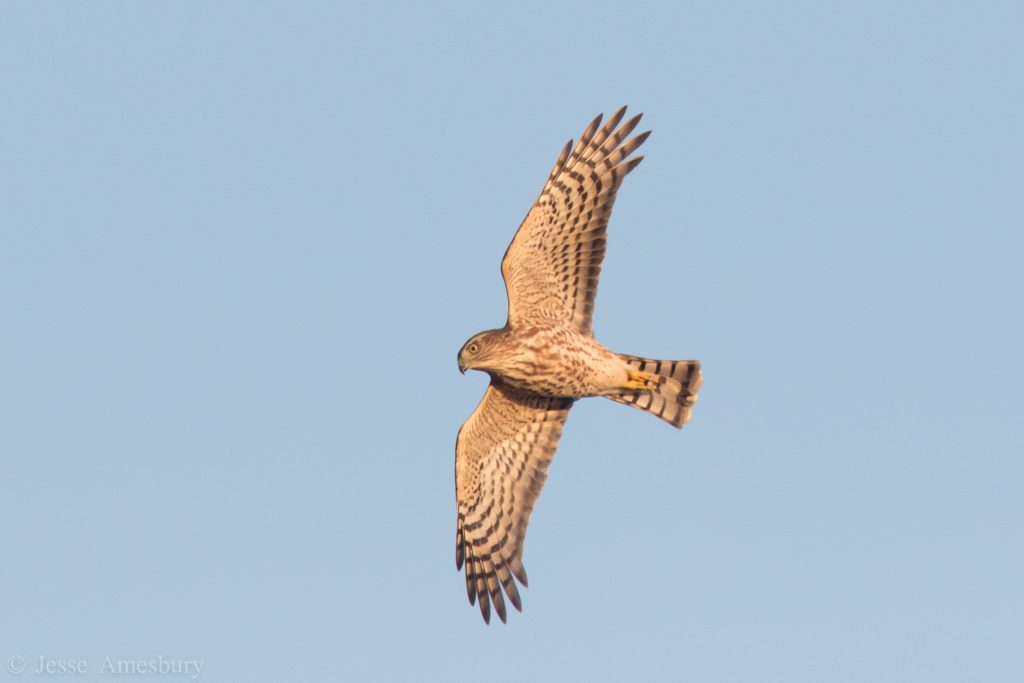 Sharp-shinned Hawks are the most numerous raptor in Cape May and October is the peak of their migration. We expect to see many thousands more of this bird-eating hawk throughout the rest of the fall season.

Thankfully, those NW winds continued for a few more days and kept the birds of prey headed towards the Cape May peninsula. October 17th looked exceptionally enticing because the NW were coupled with a temperature drop which sparked migration even more. The cold temperatures and NW winds delivered in the form of the season’s first Golden Eagle, along with 65 Merlins, the second highest total this month. The NW winds were still kicking on October 19th and brought a second Golden Eagle and 11 Red-tailed hawks, the first double digit total this month. October 20th delivered yet another Golden Eagle. October 21st produced a big surprise in the form of a pale morph Rough-legged Hawk! This species is rarely seen from the hawkwatch and sometimes completely missed during the season. As October wears on, who knows what raptors we will see next! 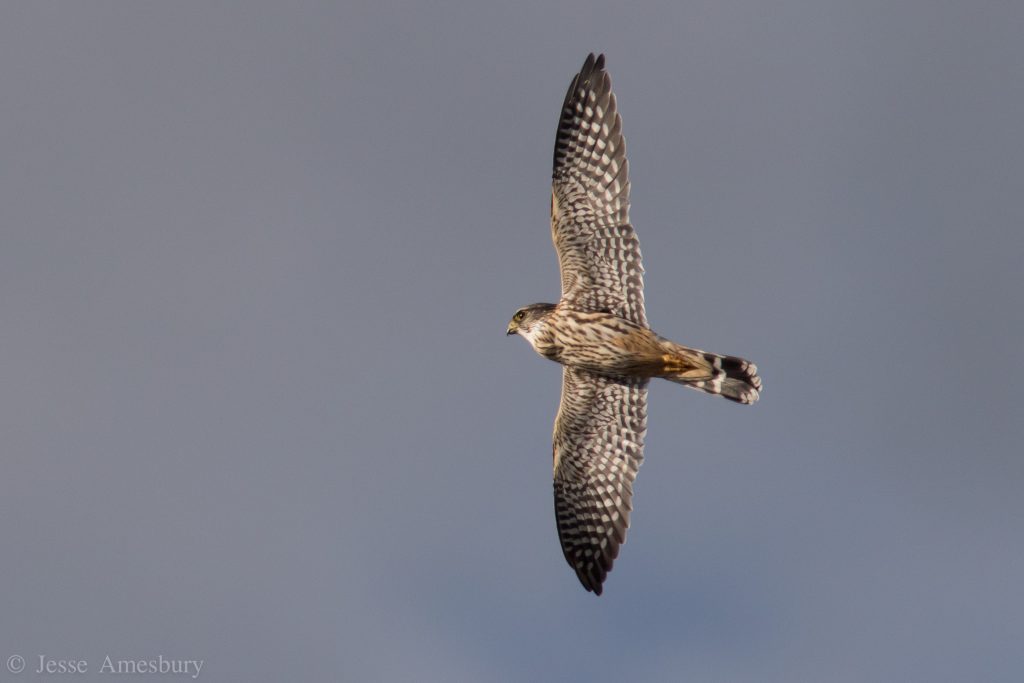 This adult male Merlin can be sexed by the reddish undertail feathers and the slate blue colored feathers on its upperside (not shown in this photo). Warning: it’s not always easy to see these plumage features on Merlins because they always are flying what seems like 100mph!

Despite the thousands of raptors counted this period, including the multiple Golden Eagles, the most exciting sighting was actually two pink birds from Florida. That’s right, two Roseate Spoonbills were seen flying over the hawkwatch platform on October 18th! It was the first time Roseate Spoonbills have been seen on Cape Island and only the second record in Cape May County. Thankfully, the Spoonbills were extremely cooperative and made two big laps around Cape Island and even landed in the South Cape May Meadows allowing for tons of people to cross paths with this southern visitor. I couldn’t believe my eyes when I saw pink birds on the horizon flying towards me. My brain must be playing tricks I thought to myself. Thankfully, they were indeed pink birds and they proceeded to fly right at us and give point blank views. These birds are juveniles because of their feathered heads and light pink wing color.

Your ticket for the: Cape May Hawkwatch Update: October 8th – October 21st