This week produced a dramatic mix of flights depending on the weather. Friday October 18th saw our biggest flight of the week. After tropical storm strength wind gusts on Thursday the wind died down and remained out the NW on Friday. The raptors were not far behind. Ospreys and Sharp-shinned Hawks began streaming past just after sunrise. The Sharpies continued all day long and were joined by Cooper’s Hawks in the mid-morning. Coops and Sharpies went toe-to-toe the rest of the day, finishing with a total of 399 Sharp-shinned Hawks and 191 Cooper’s Hawk. Merlins were also seen in big numbers – 61 to be exact. Despite the fact that we are in late October, 5 Broad-winged Hawks were also observed along with the expected Red-shouldered & Red-Tailed Hawks bringing the buteo total up to 3 species. The grand total was 830 raptors. This Merlin is on the very dark end of the spectrum for the Taiga subspecies seen here in Cape May. 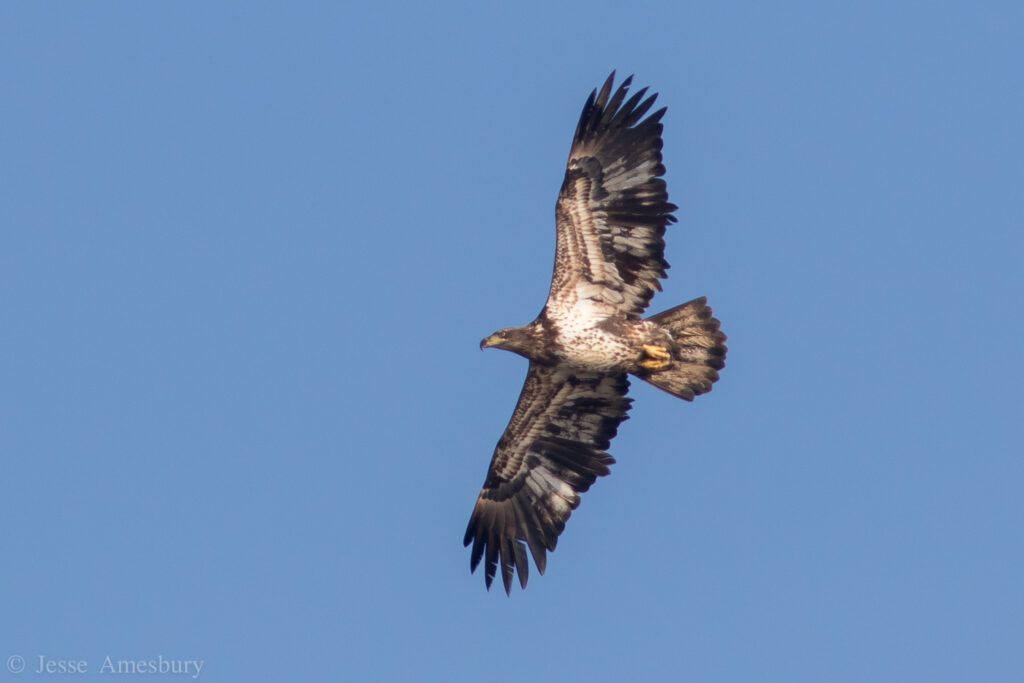 Immature Bald Eagle showing off for everyone to enjoy.

The rest of the week we battled rain and fog. In between the wet weather some mediocre flights were recorded. October 21st and 23rd both saw a couple hundred migrating raptors consisting of mostly accipiters along with a handful of falcons and buteos. The rain didn’t stop this Tennessee Warbler from foraging in the shrubs in front of the hawkwatch platform.

Now that we are near the end of October, we are seeing a shift of the most numerous raptors seen at the hawkwatch. Ospreys are becoming less numerous while Red-shouldered and Red-tailed Hawk numbers are increasing each day. We are now entering prime Golden Eagle and Northern Goshawk season. Both are uncommon migrants past the hawkwatch. Come visit the hawkwatch to be there when we spot the first one of the year! Your ticket for the: Cape May Hawkwatch Update – October 23rd