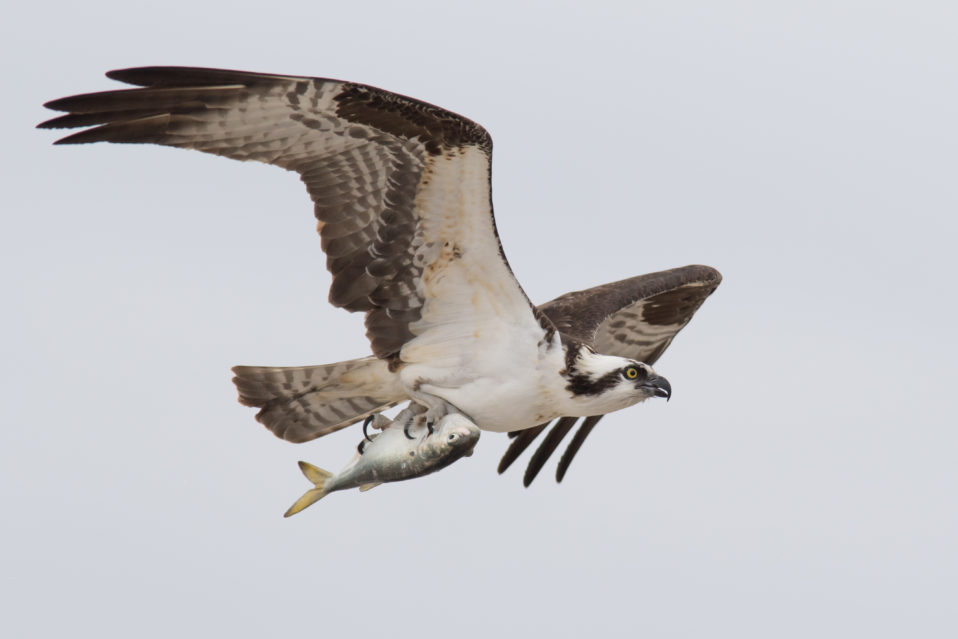 An Osprey returns from Delaware Bay after a successful fishing trip. This species rapidly became more conspicuous during mid-March, leading to a single-day high of 55 migrating past the Springwatch on March 21st.  Photo © Jesse Amesbury.

The mid- and late-March periods played host to a variety of weather conditions in Cape May, including nor’easters, dense fog, record cold, snow squalls, and strong thunderstorms. And for good measure, there were even a couple of nice days in the mix, too.

Migration has been a stop-and-go affair for most species over the past couple weeks, with small surges of migrants sneaking through between prolonged periods of unfavorable conditions. This is certainly not unusual for early spring, but 2022 has perhaps served as a more extreme example of this process than in some recent years. For birders, this portion of the calendar can be equal parts excitement and frustration. We continually hit the refresh button on bookmarked websites that contain the latest seven-day forecast, hoping (or wishing) for the next window of mild temperatures and southerly winds to usher in new arrivals. Despite the largely unfavorable conditions, several species still checked in with us for the first time during spring 2022, and some were even relatively on time, such as Blue-winged Teal, Barn and Cliff swallows, Least Sandpiper, and Greater Yellowlegs.

The clear highlight of this period was, without a doubt, the impressive showing of Northern Gannets. March is always “the” month for the species here, as tens of thousands stage in or simply migrate straight through the Delaware Bay and nearshore ocean waters. However, numbers were consistently high throughout the last couple weeks, and everyone around Cape May – birder or not – seemed to notice. Indeed, it was difficult to spend time at any beach on the peninsula without seeing at least some, and more likely a lot, of gannets lately! Numbers grew through the end of the month, culminating in a remarkable 18,227 exiting the bay on March 31st. As one of the project’s keystone species, we’re always particularly pleased when gannets put on a good show.

A visualization of Springwatch data for March 2022, showing a strong increase in Northern Gannet numbers during the second half of the month. Image from Trektellen.org. 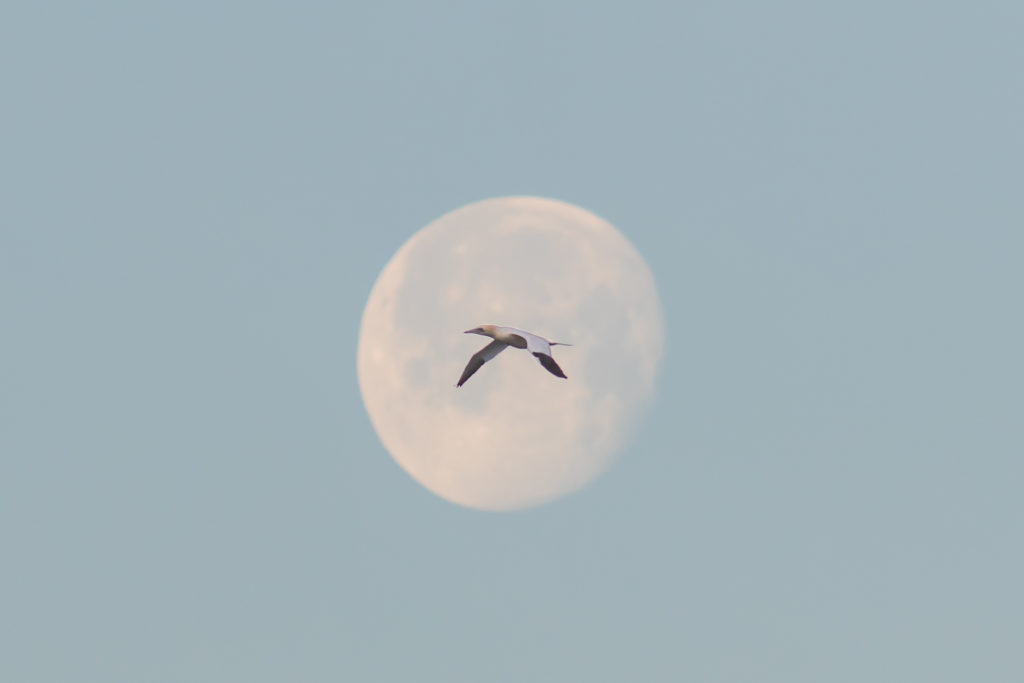 Manx Shearwater: one put in a brief appearance during fog and rain on the 24th, furnishing the first record for the Springwatch project!

White Ibis: the rapid spread and increase of this species in recent years has also resulted in progressively earlier spring arrivals, so it wasn’t a total surprise to see 18 flying past on the 27th, even if these represented the first recorded at the Springwatch in March. 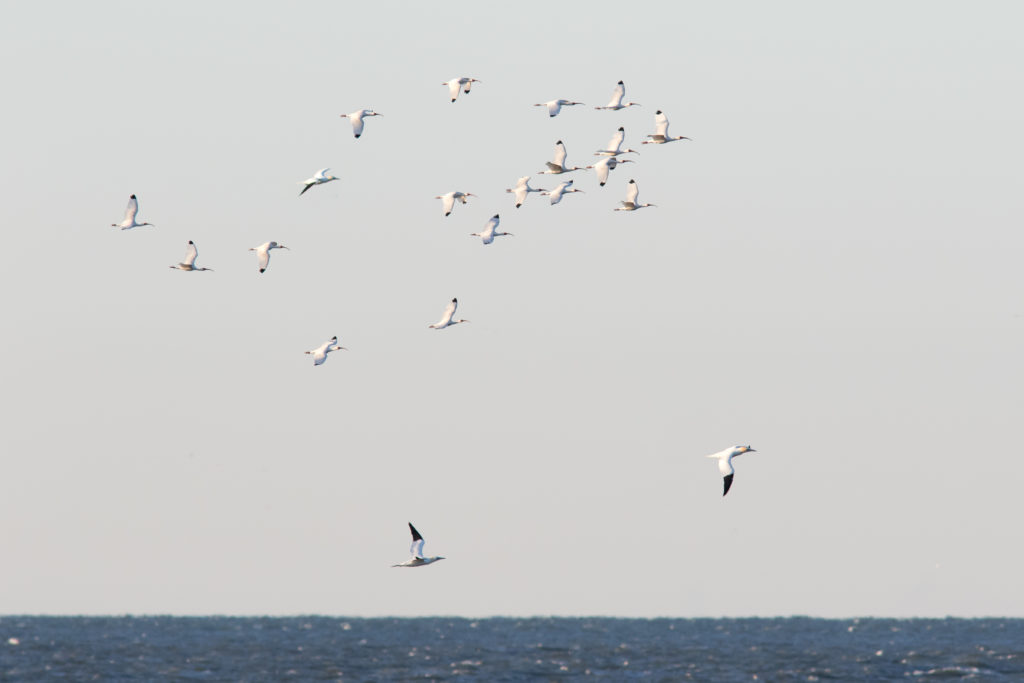 Not all white birds with black wingtips at the Springwatch are Gannets! This flock of White Ibis did its best to blend in among hundreds of Northern Gannets on the 27th. Photo © Jesse Amesbury.

Brown Pelican: much like the previous species, numbers of Brown Pelicans have been on the rise recently, and we have also seen them arriving a little earlier each year. This season’s first, an immature, was seen on the 26th.

Bald Eagle: double-digit totals of birds departing across the bay toward Delaware have been recorded on multiple days, typically following the passage of cold fronts. The season high to date consisted of 17 on March 28th. We’ll be sure to continue monitoring this interesting movement, which seems to be an increasingly conspicuous feature of early spring here. 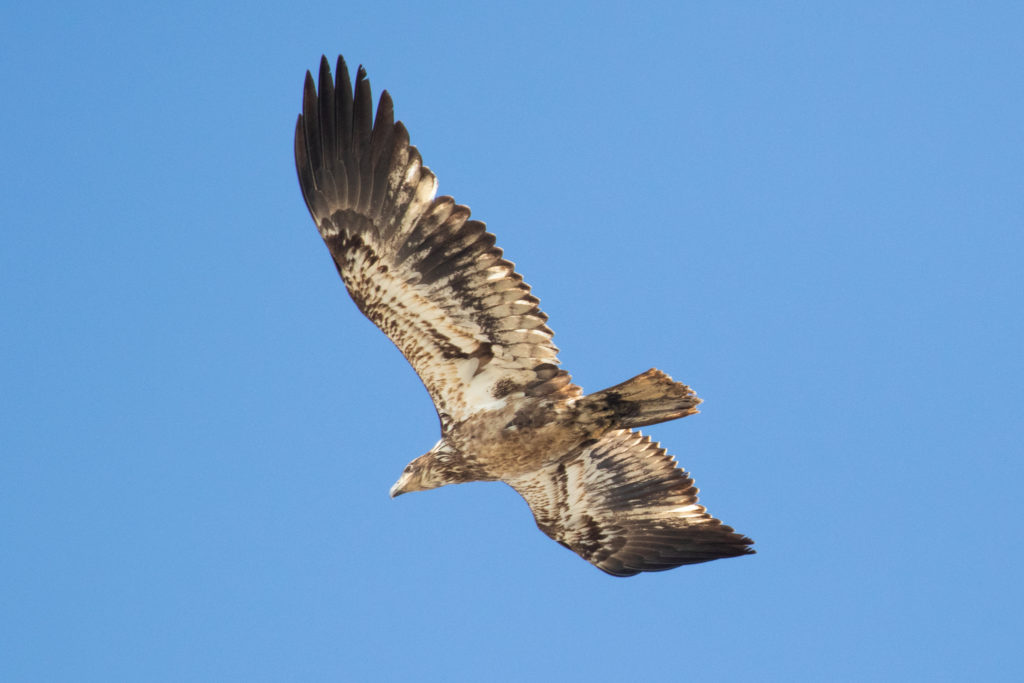 An immature Bald Eagle takes one last look at Cape May Point before setting off across Delaware Bay. Photo © Tom Reed.

Black-legged Kittiwake: an adult put in a brief appearance in the mouth of the bay on the 21st, representing just the third Springwatch record of this normally pelagic gull.

Glaucous Gull: a first-cycle individual was attracted to a swarm of gulls feeding on small fish in the bay on the 15th. The visitor from the North is a less-than-annual member of the Springwatch cast. 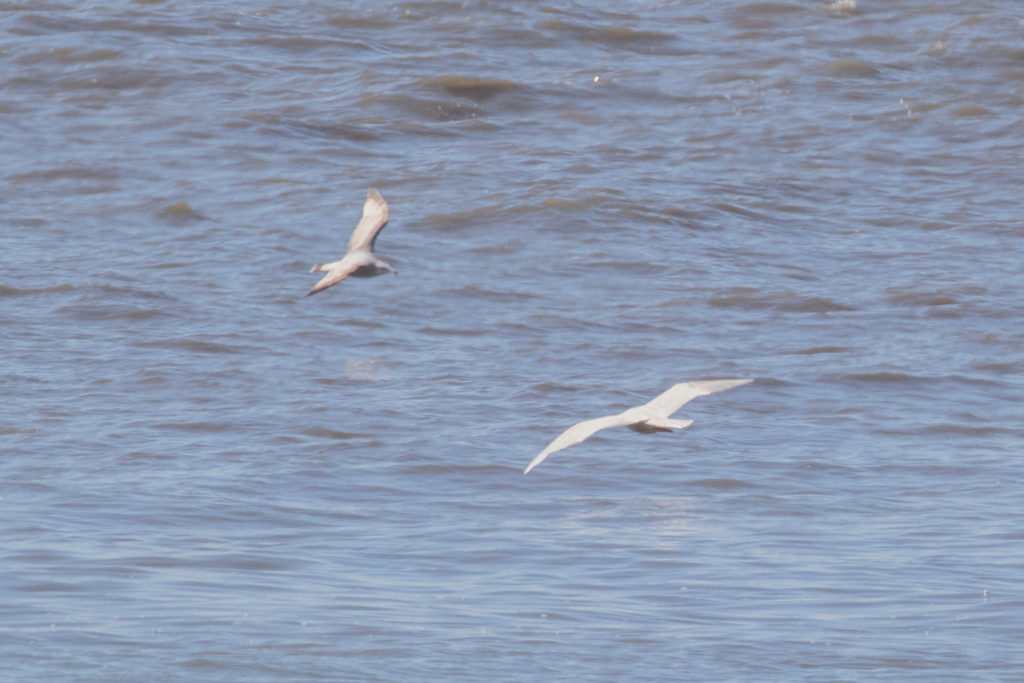 A Glaucous Gull joins the brunch party on Delaware Bay on the 15th. Photo © Tom Reed.

Common Raven: scarce but increasingly regular at Cape Island, at least two of the individuals initially seen during early March continued through much of the period. 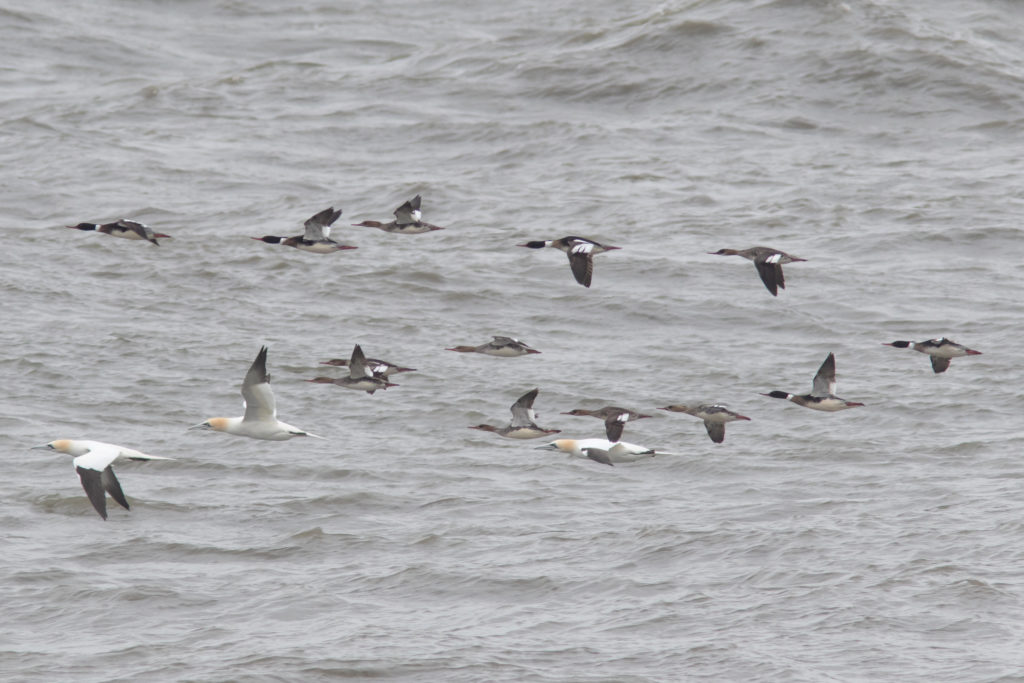 Thanks for reading, and we hope to see you in Cape May this spring! The migration count at Coral Ave starts at sunrise every day and continues for at least four hours. To learn more about the Cape May Springwatch (and to view daily migration count totals), head over to our Springwatch information page. This project is made possible through the support of Larry and Judy Winne, Zeiss Sport Optics, and the Borough of Cape May Point, NJ.

Thank You To Our Supporters

Your ticket for the: CAPE MAY SPRINGWATCH: Mid-Late March Summary