This Worm-eating Warbler passed over the dike on August 3rd. The species is a low-density migrant and is always an exciting bird to see in morning flight! Photo © Gautam Apte.

The 20th official season of Cape May Bird Observatory’s morning flight count at Higbee Beach WMA kicked off on August 1st and will continue through November 15th. After a big wave of migration at the end of July, we’ve experienced a relatively slow start to the season with persistent southerly winds stalling songbird migration across much of the Mid-Atlantic. On the third day of the count, conditions were more favorable for some nocturnal migrants and we counted a great flight for the date, highlighted by birds like Yellow-throated Warbler, Worm-eating Warbler, and an extremely early White-breasted Nuthatch. The White-breasted Nuthatch wasn’t the only unseasonable bird to move past the dike this week, as both Red-headed Woodpecker and Red-bellied Woodpecker also made appearances. Individuals like these moving so early in August could mean that we’re in for an interesting fall for various irruptive species, but there’s really no way to know for sure until we get further into the season. 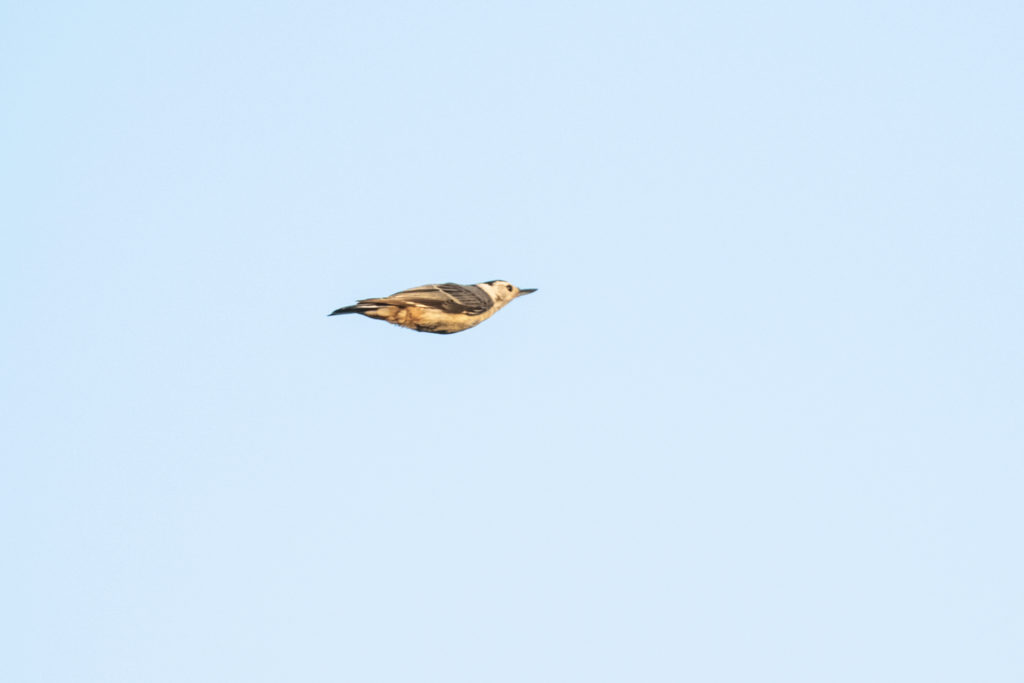 This White-breasted Nuthatch was certainly a surprise on August 3rd. Will we see a significant movement of these in fall 2022? Stay tuned! Photo © Tom Reed.

The relatively few warblers counted this week have been, as expected, primarily early-season species like Yellow Warbler with a smattering of both Louisiana and Northern waterthrushes, but some American Redstart and Bobolink have also been trickling in. We’ll expect those species to stage some large flights in late August and early September, but it’s always nice to see a few before the big waves hit. 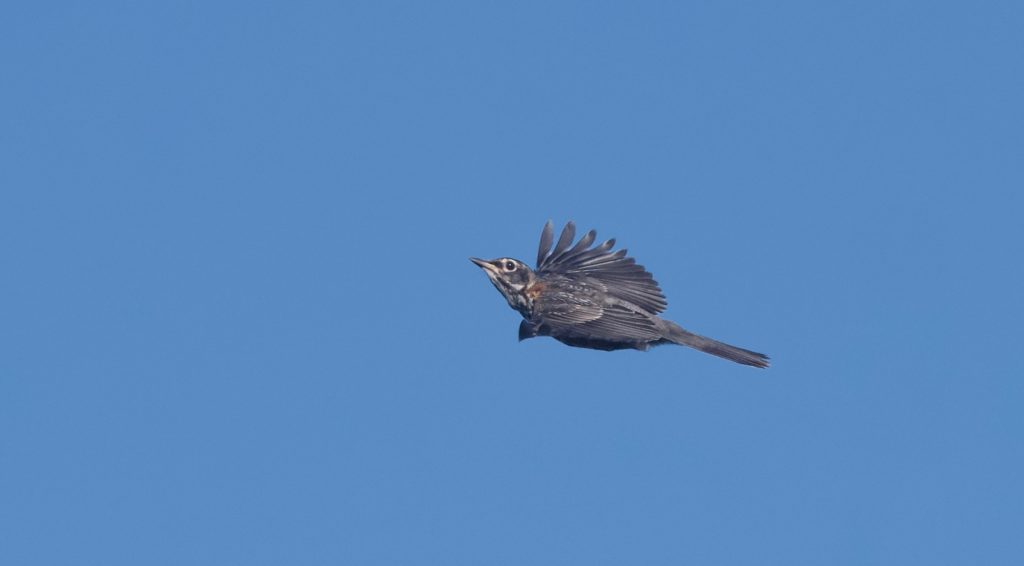 Juvenile American Robins have been moving past in small numbers this week. These are relatively easy to age in flight, with their spotted underparts and buffy-tipped wing coverts. Photo ©Gautam Apte.

Even though migration has been slow overall, there’s always something interesting happening on the dike! Shorebirds and swallows continue to move even on the south winds (in fact some prefer to do so), including a Whimbrel that flew south on the 7th. A Parasitic Jaeger was flying around in the Delaware Bay on 6th, and a flock of 26 White Ibis flew in from the bay on the 8th, furnishing a new single-day high for the count. 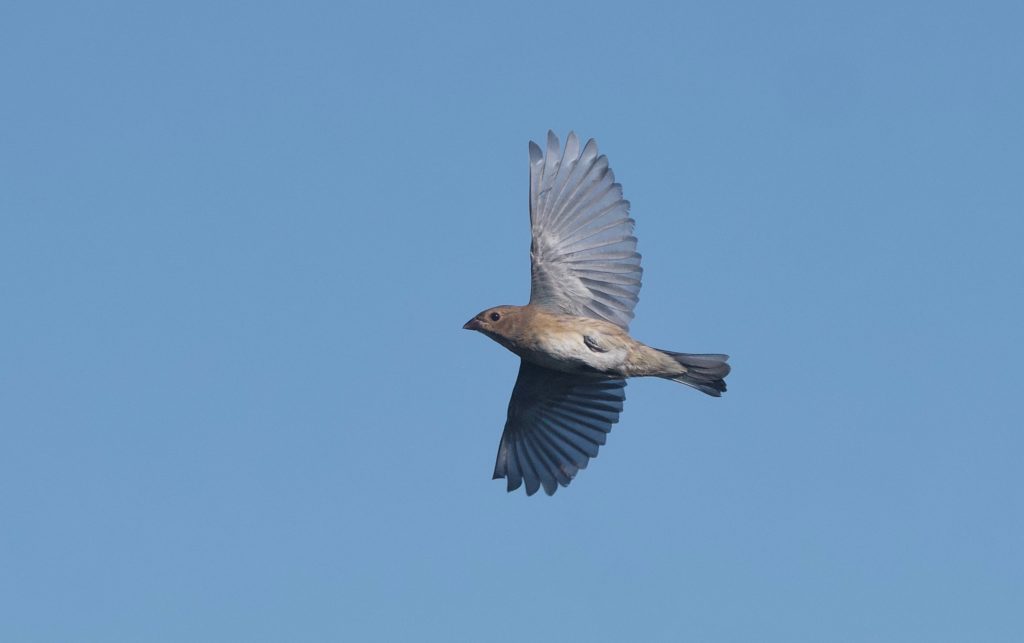 Indigo Buntings often hang around the count site at the top of the dike. We’ll count lots of these migrating later in the season, but the majority that we see right now are local breeders. Photo ©Gautam Apte.

In addition to songbirds, there was a large flight of Swamp Darners moving past the dike on August 3rd. This species often dominates late-summer dragonfly movements at Cape May, particularly during the early morning hours.  Photo © Tom Reed.

South winds continue through Tuesday night, but I’m hopeful that we could see some bigger passerine flights later this week and through next weekend, as cooler air and better migration conditions arrive. As always, you can follow the count live from the NJ Audubon website at https://njaudubon.org/watches/morning-flight/, or at https://www.trektellen.org/count/view/1746. Thanks for reading this first blog post, and I hope to see many of you up on the dike later this season! 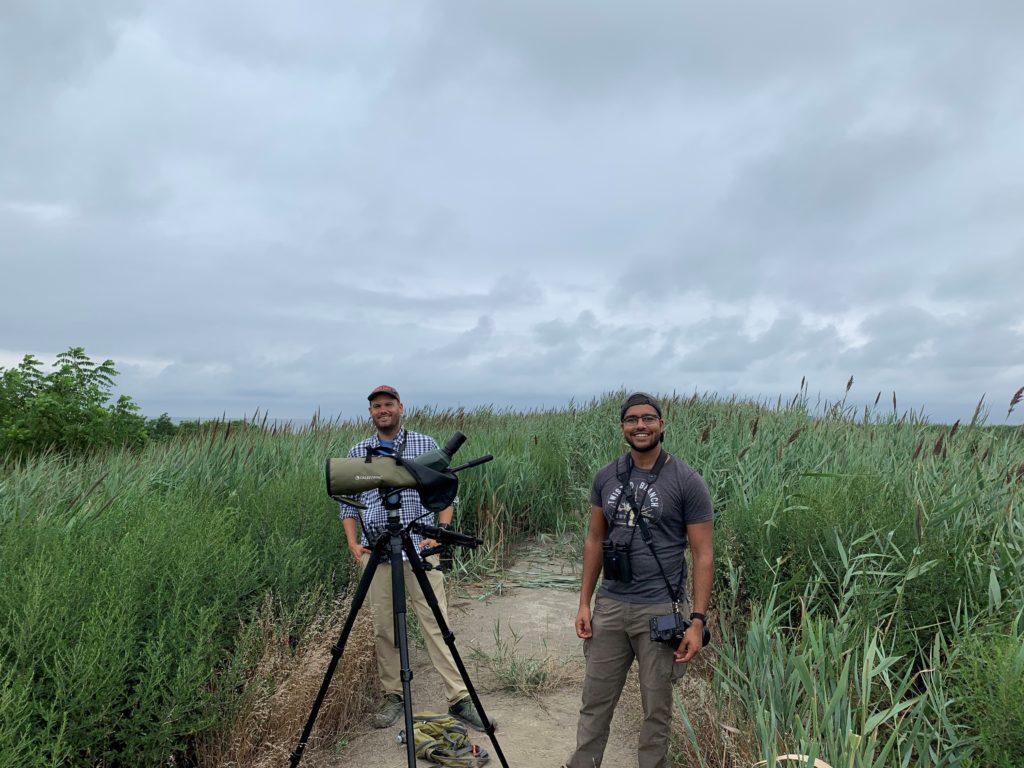 Your ticket for the: MORNING FLIGHT SONGBIRD COUNT 2022: August 1-8 Summary