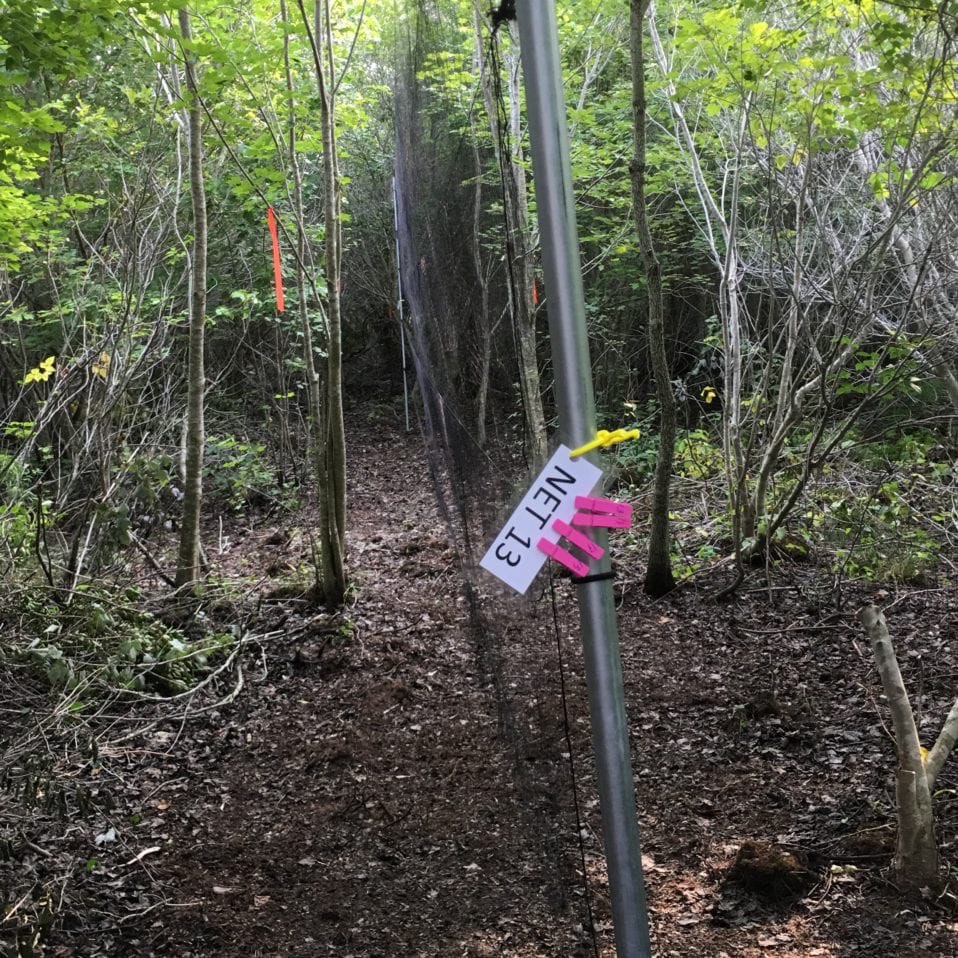 The net lanes are nearly cleared and ready for nets! 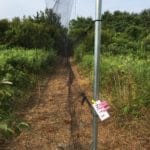 Nets installed, net clips assigned….now all we need are the birds! 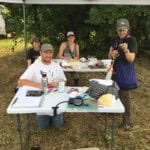 On Day 1 we took the show outdoors as the paint dried inside the banding station!

On Wednesday, August 15th, staff and volunteers from New Jersey Audubon’s Cape May Bird Observatory (CMBO) & Cellular Tracking Technologies (CTT) worked tirelessly for several hours clearing net lanes and battling poison ivy and were rewarded for their efforts the next morning when they were able to open 13 of the 15  nets a half hour before sunrise (nets 14 and 15 had not yet been installed). The first day of the inaugural season of NJ Audubon’s Cape May Banding Station, a collaboration between CMBO, The Nature Conservancy and CTT, went off without a hitch. We couldn’t ask for nicer weather or a better turn-out of birds for the first day. We were able to operate all thirteen nets for the standard six hours, over the course of which, we banded 52 individuals, of 19 species.

Most of the species banded were ones that do breed locally such as Carolina Wren, Gray Catbird, & American Redstart. In fact, we captured three individuals that were aged as “local”; they were walked back to the net from which they came so that the parents could continue caring for them. We also captured a few individuals from species that are early migrants such as Canada Warbler, which was great to see proof-in-hand that long-distant migrants are utilizing the habitat at the Meadows. 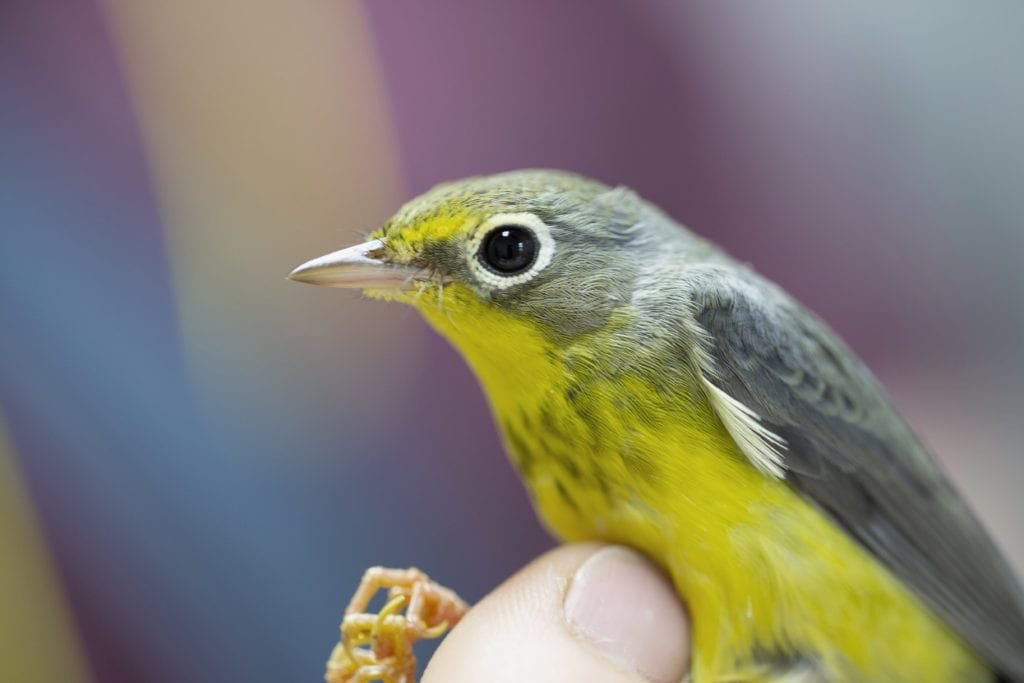 There were many highlights from the first day including watching the antics of seven Northern Mockingbirds (one of which we banded) right next to us at the banding station as well as having the privilege of seeing species such as a male Prothonotary Warbler up-close and in the hand. By far the most interesting thing to happen was while we were banding an adult female Yellow Warbler outside, a young Brown-headed Cowbird hopped over to us, looking up to the bird in hand as if to say, “mom, I’m still hungry!” Brown-headed Cowbirds are brood parasites and as Yellow Warblers are oftentimes the recipients of their eggs, raising their chicks as if they were their own, it is quite possible that this young icterid was indeed raised by the warbler that was being processed. Regardless of who its adopted parents may or may not have been, we were able to scoop up the cowbird from the ground and band it as well. 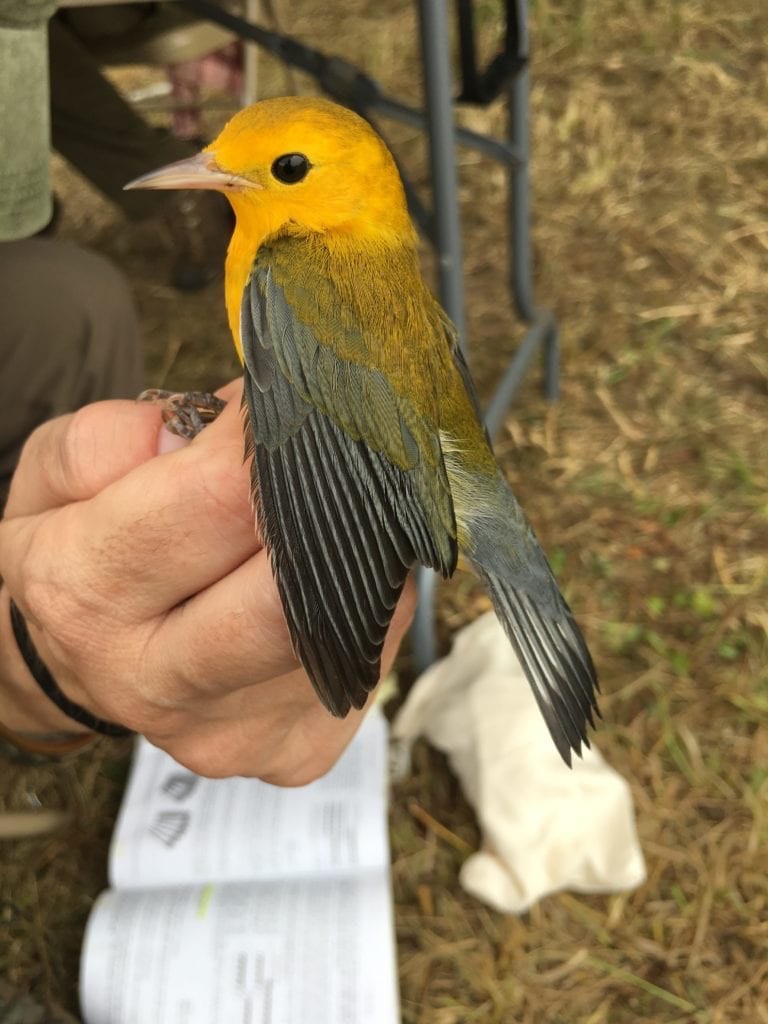 After the great first day of banding, we saw an overall decline in both the numbers of birds banded as well as of those heard around the station; the heat index also increased significantly and we closed the nets early on both the 17th & the 18th. August 17th’s highlights included banding several fat HY Northern Waterthrush, one of which delightfully topped the scales at almost 22 grams! Needless to say, those individuals were well-prepped for their migration south and we suspect that some of them may have even left the area later that day. We also saw our first Coopers Hawk fly-by and reminded ourselves that the accipiters are coming and that we will need to be ever-vigilant of them near the nets this season. We caught two Monarch butterflies in the same net and have seen several others flying around; it has now been requested that we have tags at the station so as to be able to also mark them along their migration.

August 18th we were only able to operate the nets for 4.5 hours due to the intense heat and during that time, we banded 9 individuals of 6 species. Interestingly, there was quite an impressive Barn Swallow migration that day with 10,000+ counted from the dunes at the Meadows, none of which made it anywhere near our nets despite the relatively close distance between our station and the count area. The night of the 18th brought storms to West Cape May & we were able to see exactly what 1.5 inches of rainfall looks like around each of the nets. Seven of the thirteen nets had standing water under them and six of those seven nets had ankle deep water. Our biggest concern is the area around Net#4 as it’s an area into which a small pond apparently drains. We are working with TNC to address this issue asap because even if we remove the net from that location, we still have to walk through there during every net run and we are now unfortunately “trenching out” the area each time that we do so. What started out as ankle-deep water is now shin-deep (and growing!).

There was no banding on the 19th or the 22nd so that we could address the little logistical things that came up during the first days of running the station. On the 21st we installed netting inside the banding station so that if a bird were to escape at any point during the banding process, it would not be able to fly up to the skylight & perch there. We are still working on constructing things that are important to the banding process such as where/how to hang birds and string bands as well as installing windows and a release “chute.” Most of the construction consists of brainstorming ideas and then seeing if it will actually work in that particular sized space, which sometimes, despite even the most accurate measurements, does not. We also now have the lanes cleared for all 15 of the core nets and we will be putting up the remaining two nets later this afternoon or tomorrow morning. 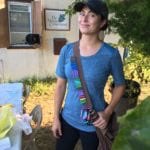 Melissa Roach with a full compliment of net clips, ready to be replaced at the nets! 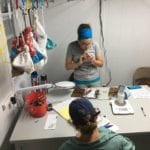 The station is almost done! A few fresh coats of paint, rigging to hang the birds as they await processing, and netting to keep birds from escaping up into the rafters! But there’s still something missing… 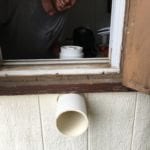 …ahh! there it is! The new release chute to make sure all birds head right back out in the The Meadows after processing!

Over the course of seven days, starting on August 16th, we banded on five of those days for a total of 287.5 mist net hours (mnh). We banded 116 individuals, of 25 species. So, for the past week: .40 birds/mnh & 40.35 birds/100mnh. Roughly 77% of the individuals banded were HY birds. Of the 27 AHY birds, we were able to further age four individuals as SY birds & two as ASY due to the fact that were in active moult. We had three recently fledged birds aged as “Local” and one individual, a male American Goldfinch, that was still very much in breeding condition.

To no one’s surprise, Gray Catbirds led the week with the most individuals banded (24), followed closely by Northern Waterthrush (23). Interestingly though, we only banded three Yellow Warblers and even though we know that they are early migrants, we stilll expected to see a larger number of them in our nets.