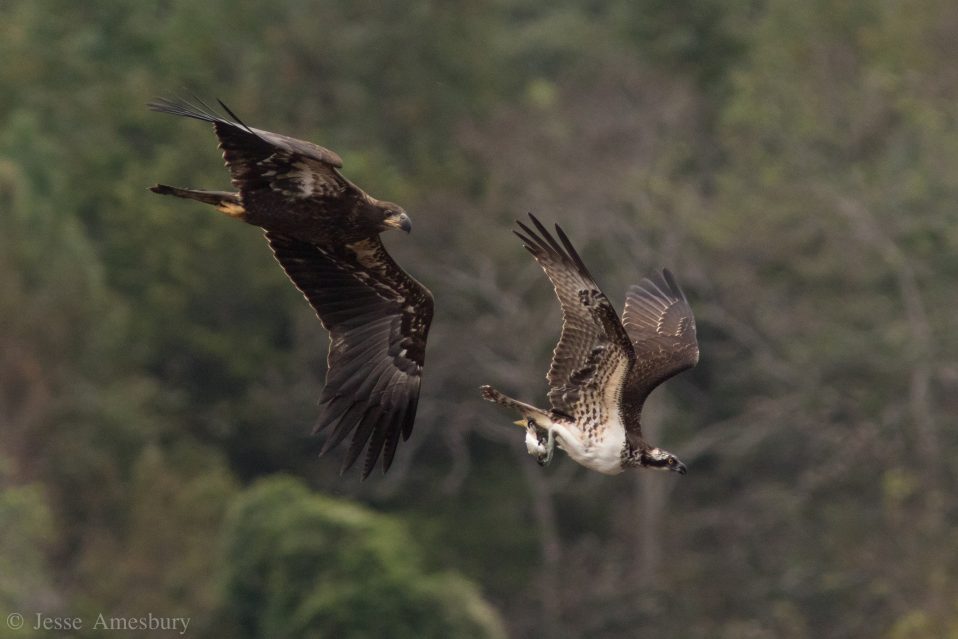 October continues to roll on with exceptional hawk migrations at the Cape May Hawkwatch sponsored by Swarovski Optik. The NW winds continued to blow throughout the region. And as we all know, there’s nothing better than NW winds in October in Cape May. The week started off with yet another strong Broad-winged Hawk flight, setting a new season high of 129, narrowly edging out last week’s flight of 127. It is a real treat to see so many Broad-wings in October when most other hawkwatching sites see so few at this date in the season.

Unfortunately, the following few days were wet and windy due to the remnants of Hurricane Delta. As the storm approached the winds shifted to the East, and migration slowed considerably. However, there was one major highlight during the deluge of rain on October 12th. The winds were howling out of ENE at 25 mph, not to mention the light rain, but 5 Peregrine Falcons were still observed crossing the Delaware Bay! What a magnificent creature to cross that long stretch of water in poor conditions and not be phased. Ospreys and a Northern Harrier also toughed it out and were seen migrating in those the same conditions. 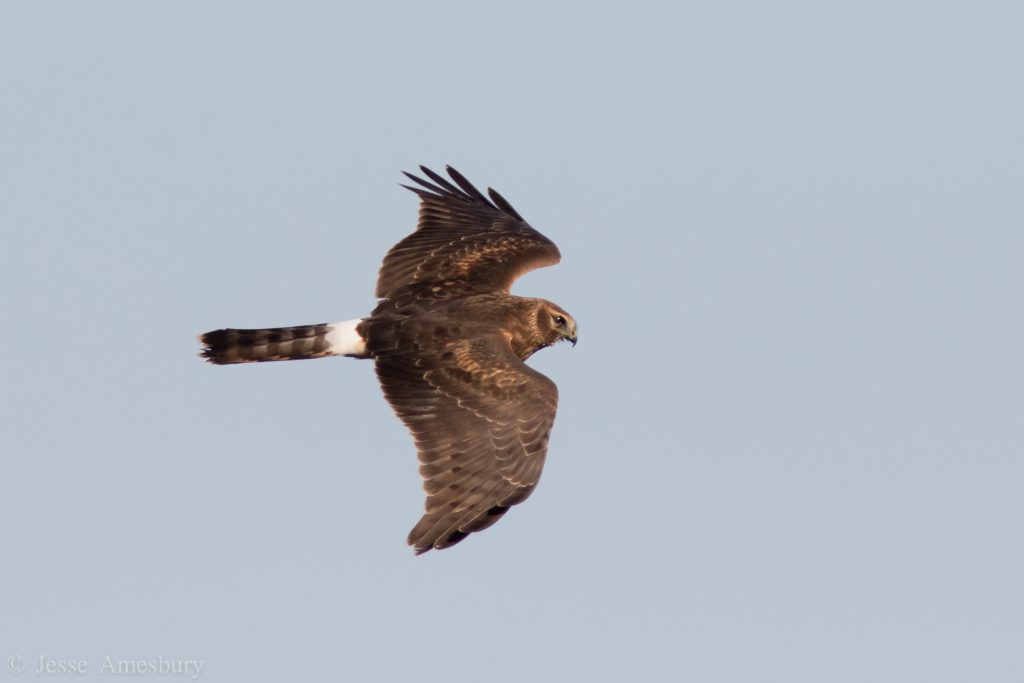 This migrating Northern Harrier observed on October 9th was much drier than the individual seen migrating during Hurricane Delta. These powerful fliers have no problem cutting through the strong winds and light rain that normally have most raptors grounded.

With migration more-or-less screeching to a halt due to the wet and soggy weather, there was a large back log of raptors ready to hit the road. So, the next few days saw winds shifted back to the NW and then we were back in business. October 13th and 14th both brought 1,000+ raptors with 1,495 and 1,865 respectively. Each of those days brought a special sighting as well. 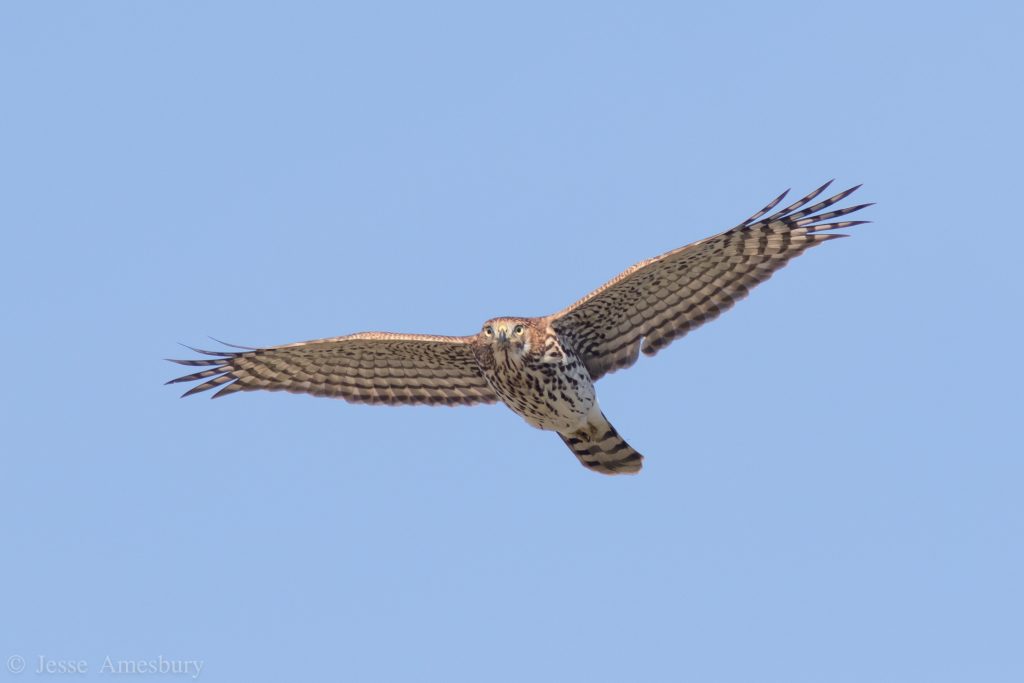 Accipiters, like this Cooper’s Hawk, made up the bulk of the raptors counted on those 1,000+ bird days. These Cooper’s Hawks often patrol the shrubby areas next to the platform looking for a meal. It is quite amusing watching the waves of songbirds flush out of the bushes whenever a Cooper’s Hawk makes a pass.

The stars of the show on October 13th were the Merlins. A whopping 203 of these mid-sized falcons were tallied migrating past the Hawkwatch. Multiple Merlins buzzed right over our heads and the oohs and aahs could be heard across the parking lot. The biggest highlight of the day was a diurnal flying Short-eared Owl. At 1pm this bird was spotted circling high to the North as if it was a typical hawk! We watched it for a few minutes before it drifted out of sight. Unfortunately, it was too far away for photos. 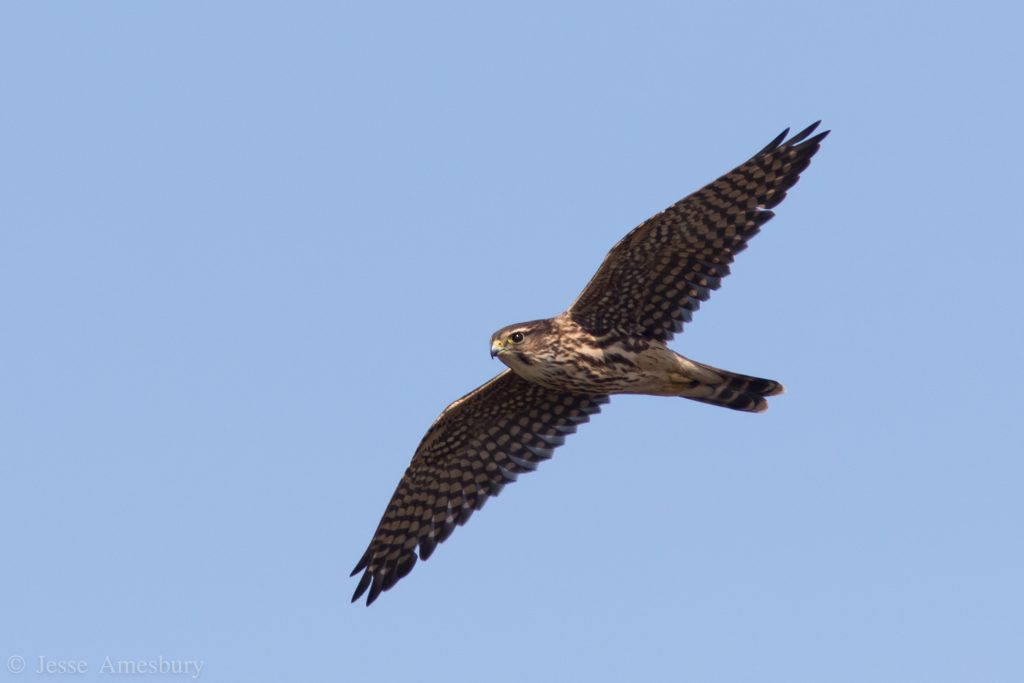 Merlins are built for speed and they were constantly zipping around close to the platform. Although only the quickest photographers were able to snap a few photos, I got very lucky with this shot!

The stars of the show on October 14th were the Ospreys. These fish-eating raptors are an early season migrant with peak numbers in September. So, a total of 208 in mid-October is an impressive showing. These elevated numbers probably relate to the major nesting success of these birds in recent years. But, the highlight of the day was, no doubt, a light morph Rough-legged Hawk. This arctic tundra nesting species rarely wanders far enough south to be counted at the hawkwatch. This species has only been documented in 4 of the last 12 seasons with the most recent sighting being October 31st 2017. You just never know what you will see at the Cape May Hawkwatch. 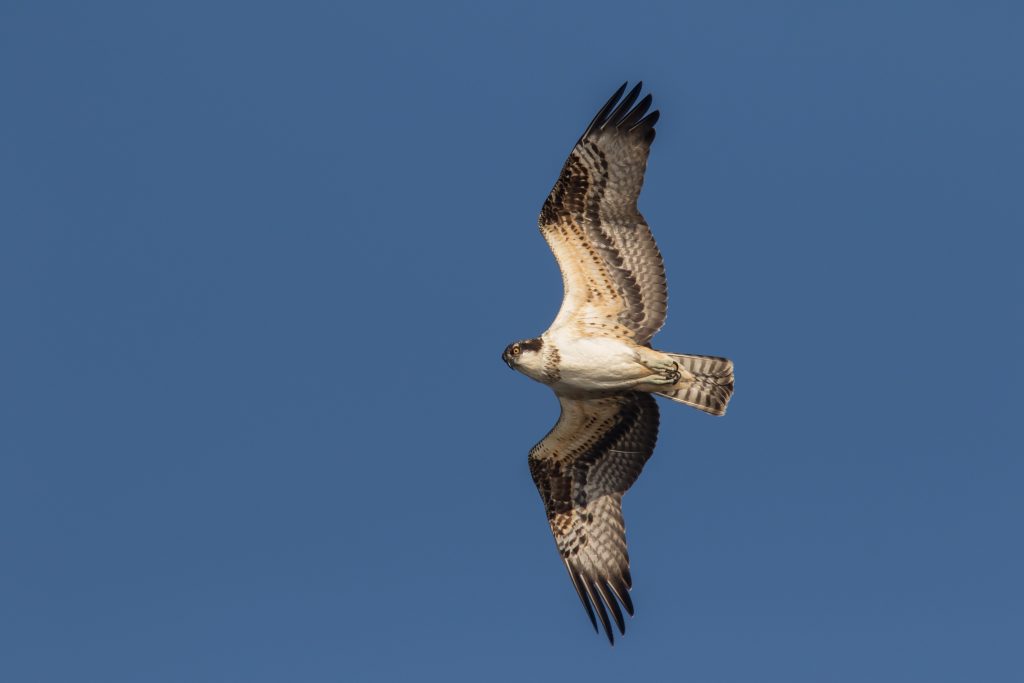 Ospreys often put a pause on their migration to hunt over Bunker Pond, like this individual was doing. It’s never too late to grab some food on the go!

There was also a fair share of non- raptor sightings this week including 3 American Golden Plovers,  a juvenile White-crowned Sparrow, and 9,000+ Pine Siskins on October 15th. The number of Pine Siskins this fall has been nothing short of spectacular.

Your ticket for the: CAPE MAY HAWKWATCH UPDATE – OCTOBER 9th – 15th