Tree Swallows battle the wind and cold at Cape May Point on April 28th.

Late April typically serves as a major turning point in spring, when migration shifts to overdrive with mild weather, new arrivals, and big movements on a regular basis. Unfortunately, such was not the case this year, as cold, windy, and generally winter-like conditions dominated much of this important period. However, there were plenty of interesting things to record at the Cape May Springwatch.

We’ll start this summary on April 19, when a strong cold front followed a coastal storm and produced some unpleasant weather but interesting birds. Headlining the show was a significant westbound movement of Bonaparte’s Gulls, with a total of 898 tallied during the early morning hours. One of the Bonaparte’s Gull flocks contained a first-cycle Little Gull, a less-than-annual Springwatch bird. The conditions gradually moderated through the 20th with a light movement recorded. The best true, northward flights of the period occurred from April 21 – 23, one of the few calm and mild stretches we encountered during late April. A number of birds arrived from the south and southwest (crossing Delaware Bay), including the season’s first Royal and Caspian terns. We then transitioned to a few days of light-to-moderate east winds from April 24–26, which coincided with a couple of exciting rarities: Western Kingbird, a first for the Springwatch and one of just a few ever seen locally during spring, and Pacific Loon, a now almost-annual spring migrant locally. A few other notable sights included the season’s first Cape May Warbler, a few decent Willet movements, 12 Parasitic Jaegers on the 26th, and the season’s first Common and Least terns. 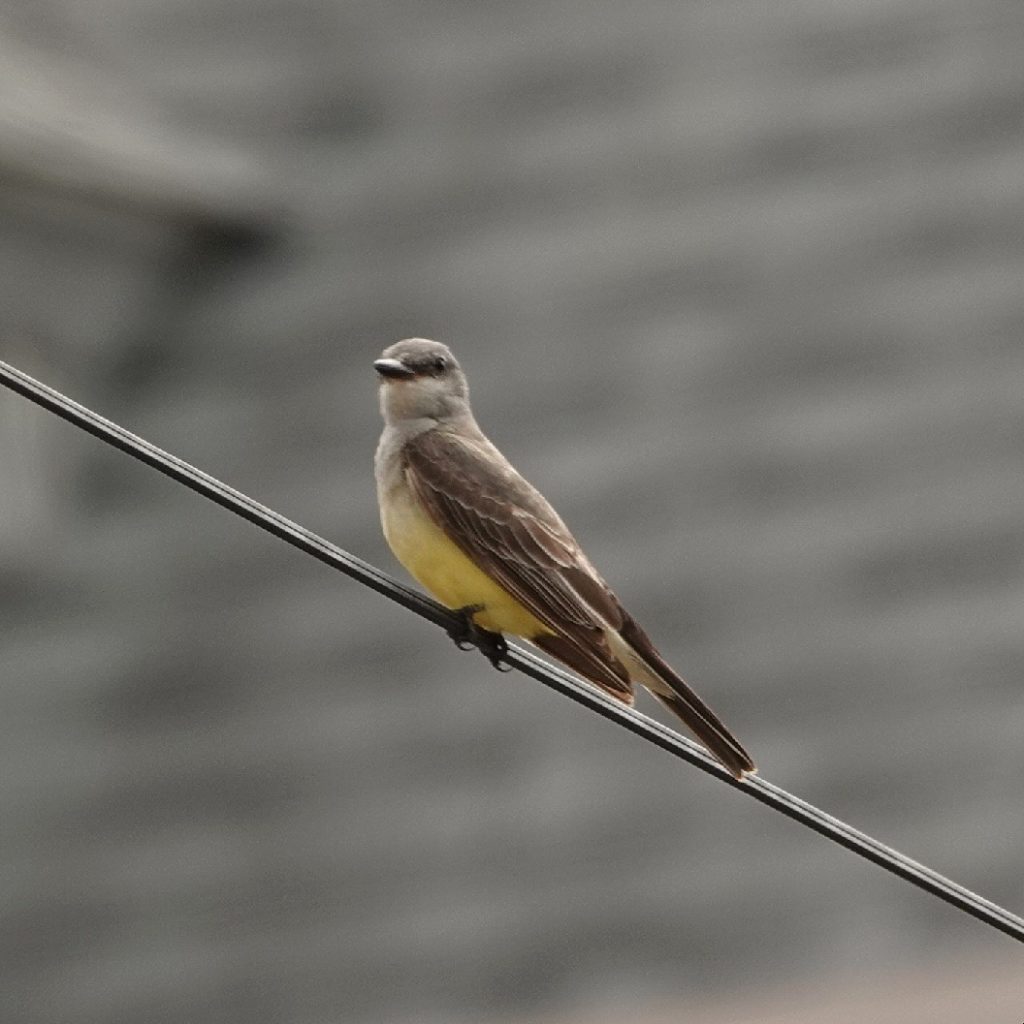 Exceptionally rare in spring, this Western Kingbird was a big surprise to Springwatch staff when it dropped into the dunes on April 26th.

It lingered through the 27th, much to the delight of the many birders who stopped by to see it. Photo © Vince Elia. This individual, an adult in breeding plumage, was the final bird tallied on the April 25th count session. Photo © Tom Reed.

A strong cold front approached late on the 26th and cleared the area on the 27th, bringing cold and windy conditions to close out the month. How cold? Try a temperature of 39ºF at sunrise on the 28th! However, the sudden cold and strong northwest winds (which funnel migrants into Cape May any day of the year) did bring a significant movement of swallows, with a Springwatch-record 1,816 Tree Swallows counted on the 28th, along with 517 Barn Swallows, 70 Cliff Swallows, and a few Bank Swallows. We saw a gradual erosion in migration intensity through the final few days of the month, though the 30th brough a surprise Prothonotary Warbler and a nice selection of raptors, including 8 Broad-winged Hawks.

What will May bring? Stay tuned! Thanks for reading, and we hope to see you in Cape May this spring! The migration count at Coral Ave starts at sunrise every day and continues for at least four hours. To learn more about the Cape May Springwatch (and to view daily migration count totals), head over to our Springwatch information page. This project is made possible through the generous support of Larry & Judy Winne, Zeiss Sport Optics, and the Borough of Cape May Point, NJ.

Your ticket for the: CAPE MAY SPRINGWATCH: Mid-Late April Summary