The excitement that ended the sixth week of our inaugural season of banding here in Cape May continued right over into the seventh week with September 27 being our biggest day yet! We processed 180 birds (165 new) of 28 species. We had five First Of Season (FOS) species: Eastern Phoebe, Eastern Wood-Pewee, Red-breasted Nuthatch (pictured above), Yellow-rumped (Myrtle) Warbler, and Brown Thrasher. 49 of the newly banded birds were Gray Catbirds and 30 were Common Yellowthroats (this time, mostly HYs). The great thing about this day is that, although it was the biggest capture day thus far, it was actually rather slow and steady but, instead of dying down after the first few rounds, we kept capturing 10-15 birds each round. We also had our first foreign recovery! This was especially exciting as many stations wait years to recapture a bird that was banded elsewhere. We eagerly await hearing back from the Bird Banding Lab (BBL) with where & when it was originally banded. 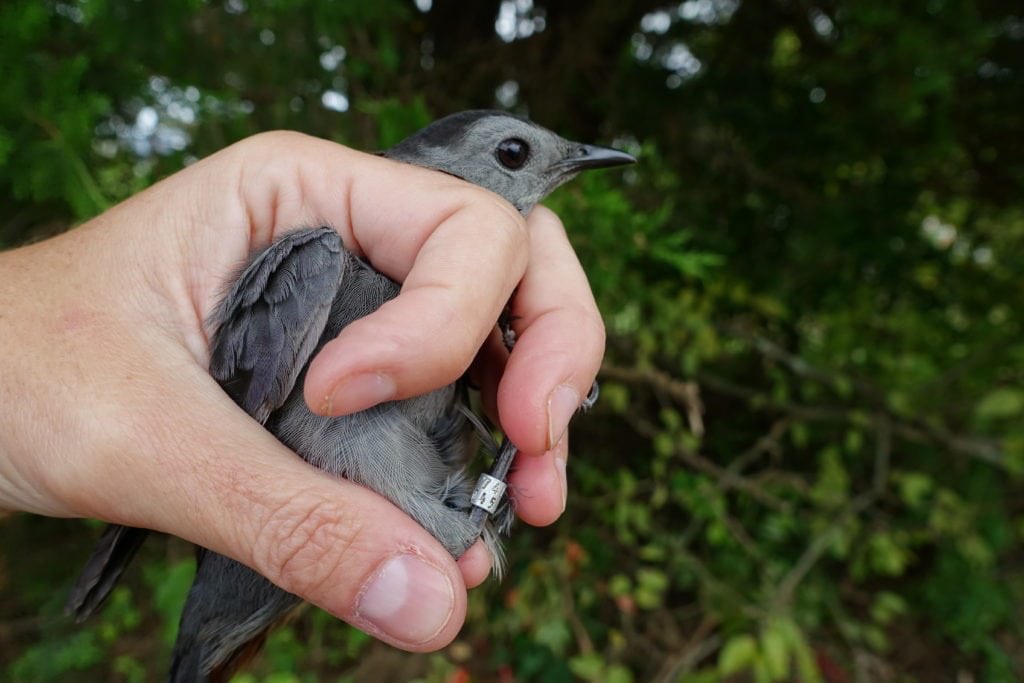 This hatch-year Gray Catbird was our first foreign recovery of the project, banded somewhere other than in Cape May. We are awaiting information from the Bird Banding Lab on its origin. The bird was weighed, measured, and released. Live long and prosper, young Catbird!

September 28 was a bit gusty so, we weren’t able to open all of the nets. We also sped the net rounds up from every thirty minutes to every twenty due to the winds. We were rewarded with our first Cape May Warbler of the season as well as 36 birds total processed (28 new) over 11 species. A Lapland Longspur flew over the station and everyone was able to get great views of it, which was very exciting! 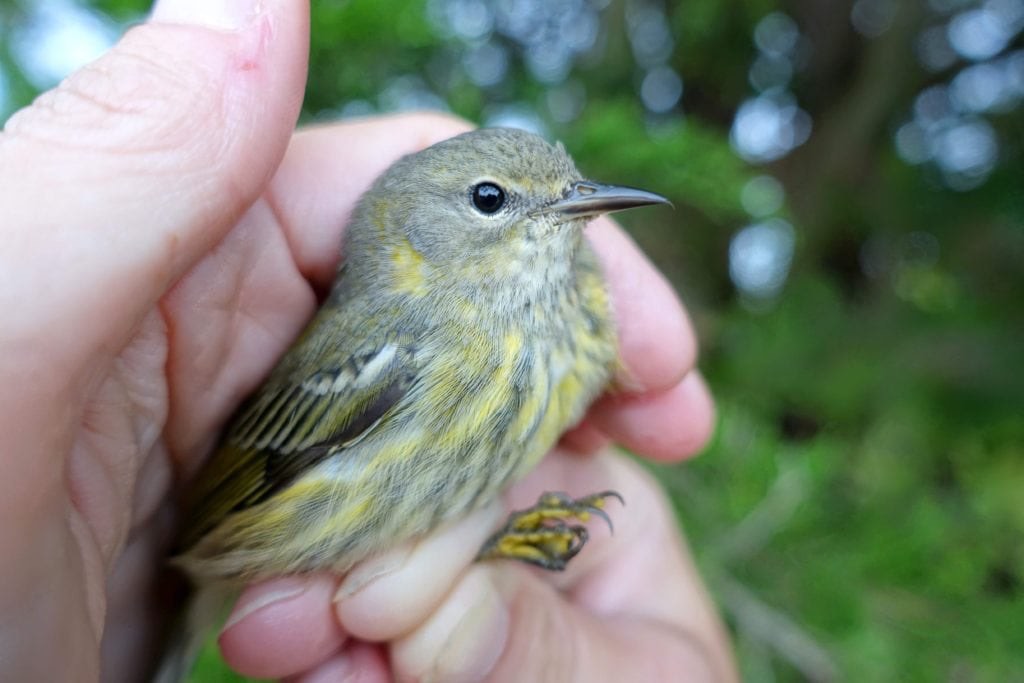 There were light NW winds overnight leading into the morning of the 29th. We processed 95 birds (86 new) of 17 species, including our first Ruby-crowned Kinglet. There were several highlights of the day including reaching into a bird bag and pulling out a Gray Catbird that was dyed purple from head to toe, even its foot pads were purple! We are well-aware of their love of pokeweed berries but, we all agreed we had never quite seen an individual as stained as this one. What was interesting was that the color was so ingrained in its feathers that it didn’t rub off on any of our hands whilst handling it. We also had the most amazing Broad-winged Hawk kettle over the station for a few hours, which was just awe-inspiring to witness. One of our youngest volunteers also spent time trapping and tagging over a dozen Monarch butterflies as part of the Cape May Monarch Monitoring Project.

September ended with another big day, this time our highest species diversity day! We processed 128 birds (118 new) of 31 species. We had four FOS species: Brown Creeper, Yellow-billed Cuckoo, Slate-colored Junco, and a Bicknell’s Thrush. The junco was surprising as we wouldn’t often expect to see one in September as they usually move into the area in late October/early November. The Cuckoo was exciting as they are amazing birds (whether in the hand or in the field) but, the prize goes to the young Bicknell’s Thrush. Only recently separated from Gray-cheeked Thrush, Bicknell’s Thrushes have one of the most restricted breeding and wintering ranges of any North American bird. They also have a rather unique mating system where both the males and the females mate with various partners. Therefore, each nest contains young from different males and males may have young in different nests. Regardless of its mating strategy, it is a rather uncommon species to be captured here in Cape May & thus is nothing short of exciting. our first Slate-colored Junco of the season; a vanguard of the winter birds yet to come!

October began with yet another foreign recovery! Some stations wait years to recapture a bird from elsewhere and here we are in our inaugural season, and we’ve already had two. This time it was a Carolina Chickadee that we know was banded as a hatching year bird by another bander here in Cape May back in 2015. With it in the nets was our first Tufted Titmouse of the season. Overall for the day we captured 55 birds (47 new) of 19 species. 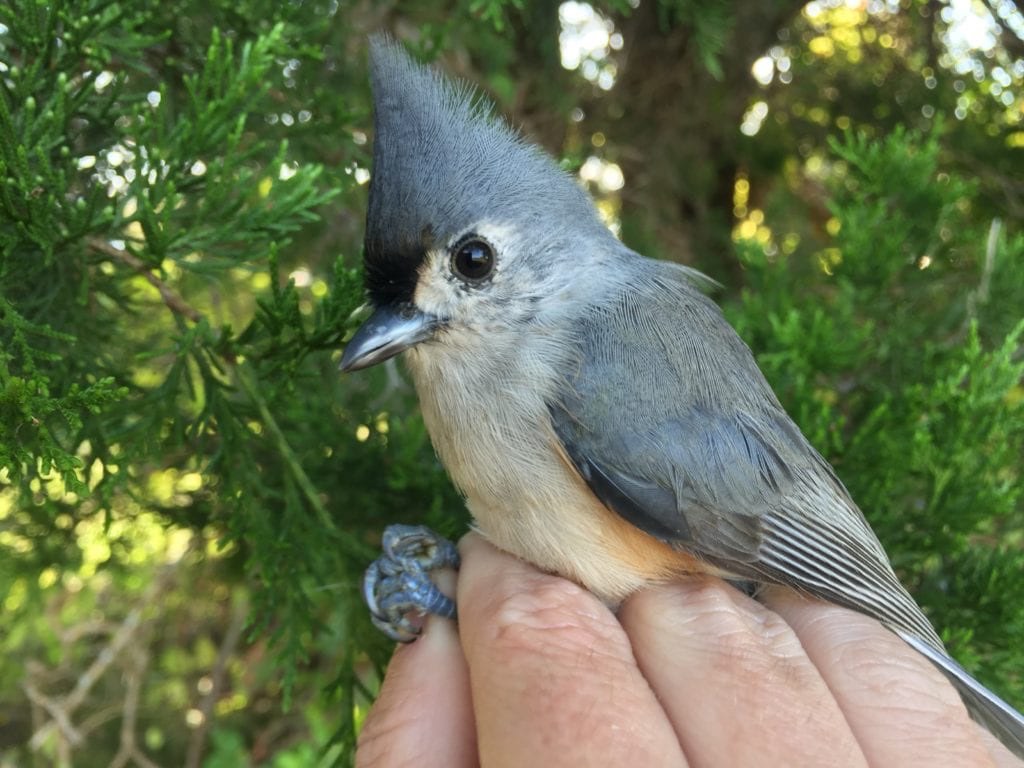 our first Tufted Titmouse of the season too!

October 2 was warm and sunny and we processed 38 birds (29 new) of 15 species including our first Eastern Towhee of the season, a young female. October 3rd was also warm and sunny and our numbers were about the same as the previous day, 38 birds processed (27 new) of 12 species. Gray Catbirds continued to dominate the captures.

Yet again, we had another amazing week banding here in Cape May. During the seventh week, we were able to (finally!) band on all seven days for a total of 702 mist net hours (mnh)! We had our busiest week yet with 500 new birds banded of 48 species, including 13 FOS. 12.6% were adult (AHY) birds including one individual which was aged as Second Year (SY). The majority of the adult birds continued to be Gray Catbirds and Common Yellowthroats. Gray Catbirds blew the competition out of the water with 180 newly banded individuals. It is definitely that time of year! Common Yellowthroats moved up to second place with 66 individuals banded and American Redstarts rounded out the top three with 45 newly banded birds. Sadly, our friends the Northern Waterthrush, finished in fifth place with only 34 individuals banded. However, the fact that we’ve now banded 409 of them is nothing short of amazing and we can’t wait to work with them more in the future.

We processed 66 recaptures, 2 of which were “foreign”, i.e. they had been previously banded elsewhere. Whereas in the beginning of the week, we were still recapturing true neotropical migrants such as Northern Waterthrush and American Redstarts, by the end of the week, we were seeing mostly the “local” birds, such as Carolina Wrens and Carolina Chickadees, back in our nets. This is most likely due to migrants finally moving out of the marsh and onwards towards their wintering grounds. No doubt there are many more migrants to come, so stay tuned for the next weekly report in a few days!