The first season of the next 100 years Bird banding provides an opportunity to assess the physical condition of birds, as well as to determine the age/sex ratio of birds passing through a site. Together these data provide insight into the health of individuals, populations, and in some cases, entire species. While NJ Audubon’s Cape May Bird Observatory (CMBO) has been counting migratory birds for over 40 years at Cape May, no long-term banding effort has ever been mounted by the observatory. In Fall 2018 this changed. In a partnership between New Jersey Audubon, The Nature Conservancy and Cellular Tracking Technologies, and with support from generous donors, CMBO has embarked on a next-generation bird study station that combines the tried-and-true methods of long-term banding programs with specific high-resolution bird-tracking studies to determine how long a bird stays in an area, what habitats are used and where individual birds travel. This project takes place at The Nature Conservancy’s South Cape May Meadows Preserve; or as it is locally known, The Meadows. 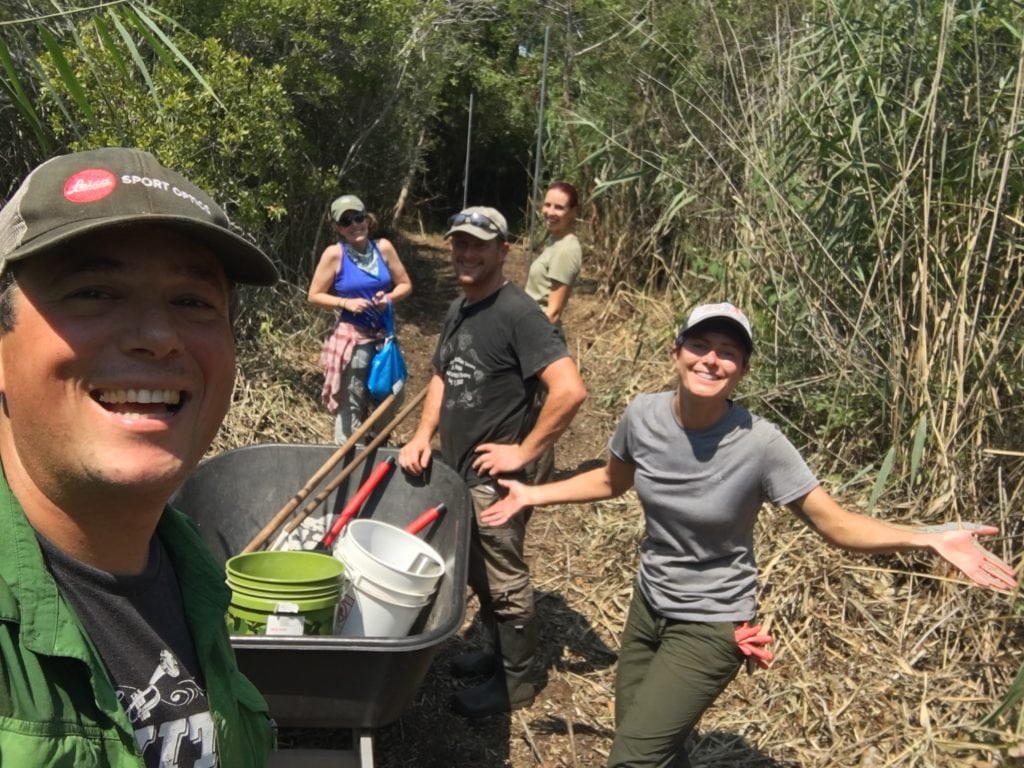 A day before opening, the final clearing of the trails for our net lanes

The primary objectives of the project are as follows:

So far this fall we’ve already begun to uncover some fascinating information about birds using The Meadows. One of our most interesting findings has been the extended use of the site by Northern Waterthrushes. Between August 16th and September 22nd we banded 334 Northern Waterthrushes, with many of these birds showing little fat reserves, indicating that they had just recently arrived. We have recaptured previously banded birds 74 times allowing us to determine whether or not they gained weight on the site. If they did, this would indicate positive stopover habitat quality; and in the vast majority of cases, they did, at an average rate of 0.5 – 1g per day, with some individuals sticking around for 6-8 days. The Waterthrush story is but one of several starting to materialize with each new day of data, and we will be telling you more about it as we go along. Keep watching the blog for updates! 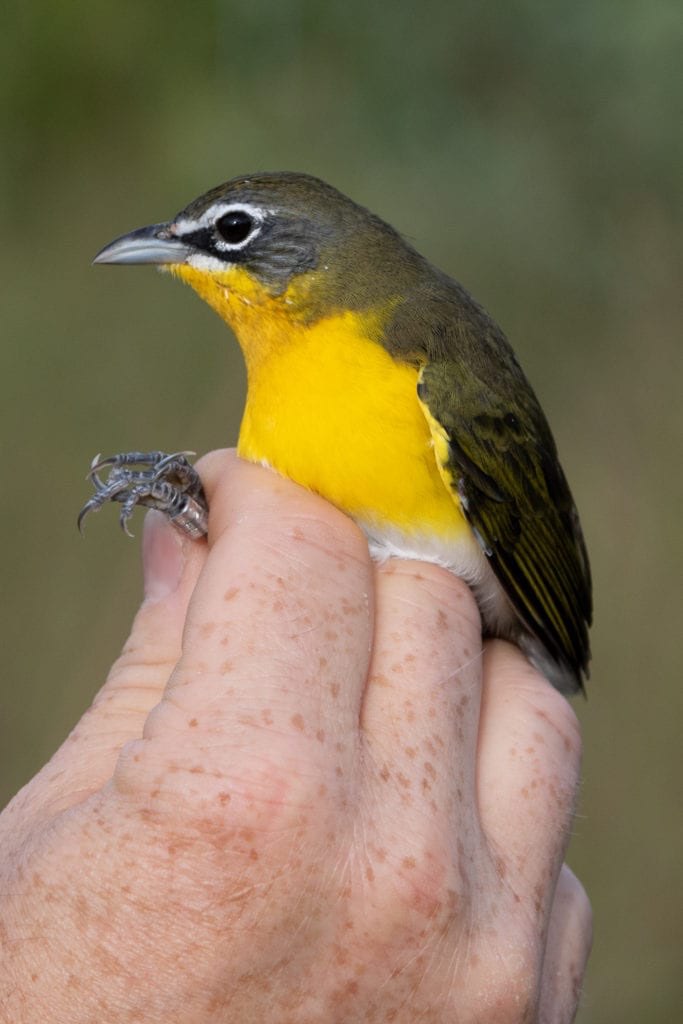 Yellow-breasted Chat, a breeder in The Meadows, but we expect migrants from farther north also move through. This one was particularly spiffy!

Kicking Off the Tracking Study

As part of this new banding station we will begin tracking studies on three resident species and one migrant species over the next few weeks. We will be outfitting Northern Cardinals, Northern Mockingbirds and Carolina Wrens, as well as Yellow-rumped Warblers, with tiny radio transmitters which can tell us approximately where the birds are. These tiny UHF transmitters weigh only 0.37g! As birds move around the peninsula and beyond, the transmitter signal is picked up at various stations throughout Cape May County, around Delaware Bay and across the eastern flyway down to the tropics. The data we will collect will help us better understand habitat use of resident and migrant birds, the stopover time of migrants, and the behavior of these birds across multiple season and multiple years. Data will then help inform our management and conservation practices for years to come. 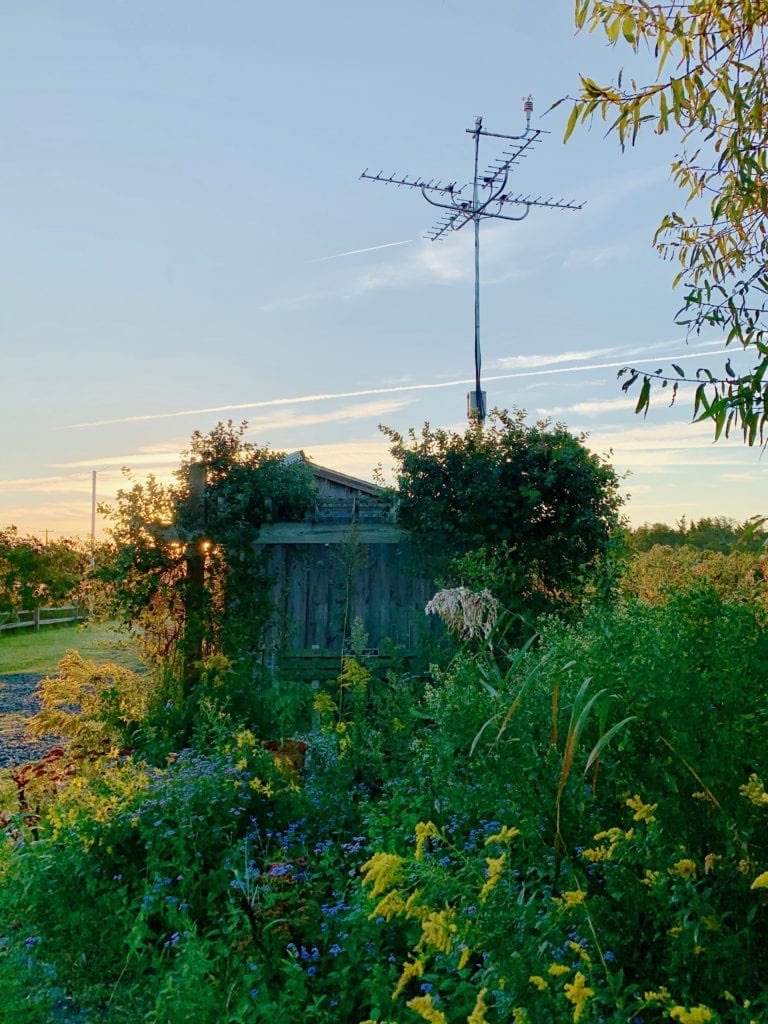 When you’re in Cape May, you come to expect the unexpected. On September 26th, in the last hours of the banding day (we typically quit 6 hours after sunrise, and this incident took place at around 11:15am), we caught a rare bird in net #15. This has already proven to be the “vireo net”, catching many Red-eyed Vireos over the last few weeks, so when our bander, Laura-Marie, pulled out a large vireo with a bright red eye and bright yellow underparts. We all took a double-take.

Indeed, it was a Yellow-green Vireo, a bird that typically breeds from Northern Mexico to Panama, and winters in the Amazon Basin of South America! While unexpected, and a first state record, the bird is one local birders have been watching for. Yellow-green Vireos show up in California at times, presumedly migrating north instead of south, or overshooting the breeding grounds on the way back from South America. But east coast records are very rare. We don’t know why this bird was here, but we were able to get all the typical measurements and then affix a transmitter to the bird to track its movements. When released, the bird immediately began to transmit a signal to the base station, giving us some idea to its whereabouts on the site. Our data shows that the bird remained in the Meadows preserve during the day of the 27th, but left the area sometime after dark that night. We expect that this means the bird has left Cape May, but with the many towers throughout the region, we hope to pick up a signal sometime in the future. In the meantime we wish our visitor safe travels! 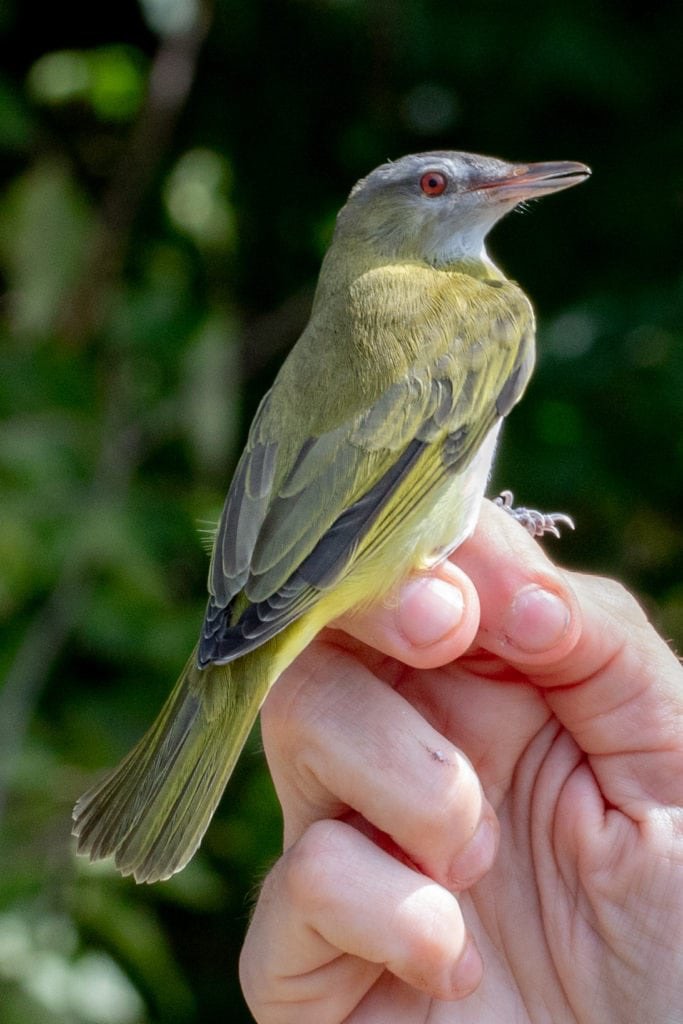 Yellow-green Vireo, banded and fitted with a tiny LifeTag UHF transmitter (not shown in this photo)

So the first season of the next 100 years is well underway, and the data are already telling us interesting things. Each bit of information adds a piece to the puzzle and deepens our understanding of the needs of resident and migratory birds. Long-term datasets from banding stations are critical for understanding changing bird populations in a changing world. Birds can be indicators of greater ecosystem health, as well as being intrinsically valuable. The high-tech information we can collect now from tiny transmitters adds a very significant element to our data as well, and helps us fill in the gaps previously only filled by recapturing birds at different stations; a rare occurrence even at the best stations. We at New Jersey Audubon’s Cape May Bird Observatory look forward to this long-term collaboration with our partners at The Nature Conservancy and Cellular Tracking Technologies and we look forward to bringing you more information as it happens right here on the NJ Audubon blog.

Until next time, Good Birding! Northern Waterthrush, one of the most common species on our study site and a very interesting one indeed! We hope to learn much more about this wonderful neotropical migrant in the coming years!

Your ticket for the: The first season of the next 100 years

The first season of the next 100 years