After three years of habitat restoration work at the Cape May Bird Observatory’s Northwood Center, highlighted by the Ryan De Witt Memorial Trail, there has been a noticeable uptick in the number of bird species—especially warblers! —flitting through the space. It may not always seem that obvious, but replacing non-native plants with native species has a ripple effect on the rest of the area’s food web. Native plants provide the appropriate food and shelter for small mammals, amphibians, and birds, thus sustaining predators farther up the chain. As an effort to better understand what impacts the habitat restoration has had on the biodiversity of the Northwood ecosystem, we decided to have a bioblitz! A bioblitz is an organized effort to catalogue all living organisms in a specified location over a set period of time. Results of our bioblitz are still coming in from our dedicated crew, but here is a snapshot of what we have tallied so far. The CMBO Northwood Center Bioblitz was held on October 5th, 2018. During that 24-hour period, expert and novice naturalists alike scoured the property. A rainy afternoon meant that some species remained hidden from our watchful eyes, such as the diurnal pollinators. Only six species of bees and butterflies were discovered over the course of the day. However, the star of the show was our moth sheet! Hung the night before on the side of the building, the mercury light shining above brought in an impressive array of species to rest on the sheet. The diversity was beyond anything Northwood has experienced before. Participants pulled out all the stops—and their high-powered camera lenses—to photograph and identify 95 species of moths. Highlights included the Tersa Sphinx, Bur Oak Pygmy Leafminer (just a 4mm wingspan!), Skullcap Skeletonizer, and even a fly masquerading as a moth. But, the fun was not reserved for just our moth enthusiasts. There were plenty of other invertebrates around to keep everyone busy. Beetles scurried about, leafhoppers dotted the plants, and dragonflies zipped by, among many others. The true identity of some of these creatures will remain a mystery to us, because of the meticulous nature of insect identification. Findings may not be categorized beyond the taxonomic levels of family or genus, and it may take a month or two for one individual to be fully identified! To date, we have found 94 additional invertebrate species at Northwood, with more pending. 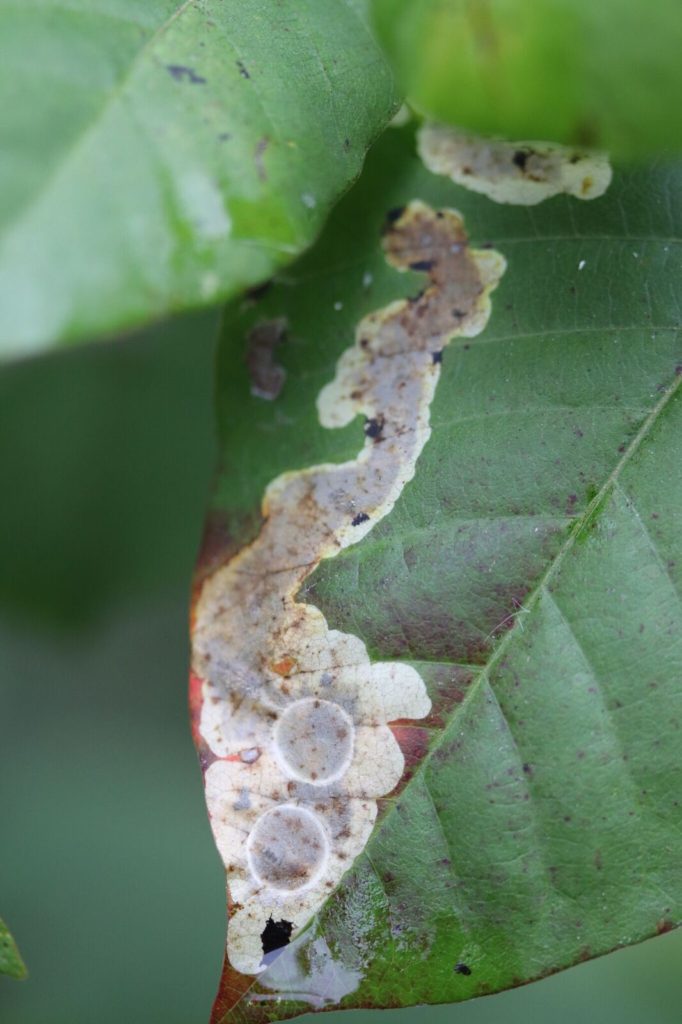 Despite conducting the bioblitz later in the fall than anticipated, there was still a good turnout of birds, including nine species of warblers. Though some of the 70 bird species documented were flying by and not actively using the property, the diversity of taxa represented is a testament to the importance of creating stopover habitat space and functional habitat corridors for migrating wildlife. Highlights on the avian list included Northern Harrier, Common Nighthawk, Black-throated Green Warbler, Gray-cheeked Thrush, and both species of Night-Herons. Those patient enough to search for reptiles, amphibians, and mammals were rewarded with four different species of frogs, Common Snapping Turtle, and Eastern Garter Snake, as well as Eastern Cottontail Rabbits and Gray Squirrels.

And the backbone of it all? 105 species of plants recorded on the property. From Lyre-leaved Sage to Blue Vervain to Black Cherry, each plays an anchoring role in Northwood’s habitat. Though some non-native plants persist, the majority are native, and their impact has been made clear. To top it off, 6 species of fungus and lichens were also noted, including the marvelous Bird’s Nest Fungi.

All in all, 399 distinct organisms have been identified so far. We hope to continue holding bioblitzes in the future to learn even more about the property’s transformation. Until next year, come visit the Northwood Center and explore the trails! Keep your eyes and ears open, because you never know what you might discover! Let us know what you find!

Your ticket for the: NORTHWOOD CENTER BIOBLITZ