Monarchs and Viceroys: A Tale of Mimicry 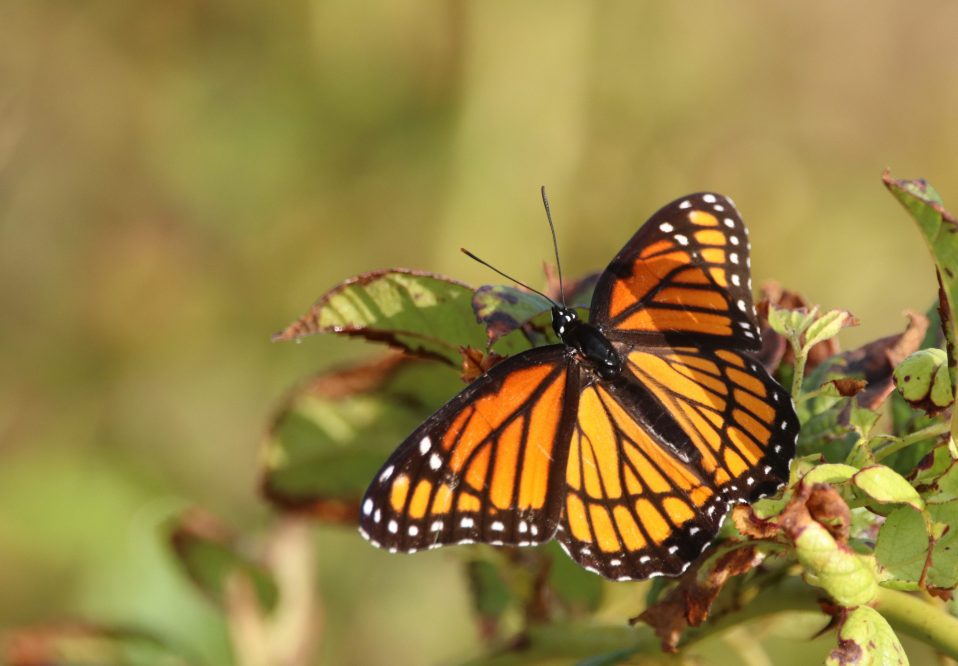 Director’s Note: Our two seasonal naturalists for 2020, Katherine Culbertson and Jack McDonough, are preparing a series of blog posts designed to educate readers about many aspects of monarch biology and related topics.  Here’s the second of this series, written by Jack McDonough, and titled:

Migrating Monarchs, look, they’re all around us! Or are they? What if I told you that there are imposters out there, wanna be butterflies who wish they could be as awesome as the Monarch, so they dress up as Monarchs to steal all their praise and glory. Thousands of Monarchs in Cape May suffer every year from identity theft by Viceroys, taking a huge toll on their credibility as butterflies. Person after person will come along and take photos of Monarchs, admiring them for their intense migration and nobility, when in reality, it’s just a vile Viceroy in disguise! Help save the Monarch community in restoring their respect by educating yourself below. Together, we can expose the criminal activity of the vile Viceroys and win back the mighty Monarchs title of being the best butterfly

Viceroys (Limenitis archippus) are Monarch mimics, even though they’re not very closely related.  The mimicry of Viceroys was originally referred to as Batesian mimicry, named for Henry Walter Bates, who in 1862 discovered that some species falsely mimic the aposematism of other species (found commonly in snakes, plants, and in multiple species of butterflies). Aposematism is the term biologists use when species have bright flashy colors (usually red or orange paired with black) that warns predators that they are distasteful or toxic to eat. Upon seeing these bright colors, predators leave them alone. Monarchs are toxic to invertebrates, so any mammal or bird that might wish to take a bite into a Monarch will quickly regret the decision. However, it has been recently discovered that Viceroys are, in fact, toxic as well, having evolved a different kind of toxin than Monarchs. So this is actually called Müllerian co-mimicry and not the Batesian mimicry as previously thought. Müllerian mimicry is when two or more species evolve similar appearances when both toxicity and/or foul taste, so that a lesser toll is taken on each species by predators who are still learning to avoid that appearance. By looking almost the same and both being toxic partners, the two species (in this case the Monarch and the Viceroy) both benefit from each other. However, because of this evolutionary adaptation, they’re often hard to distinguish. Sneaky, but not sneaky enough to get past our naturalists here at the Monarch Monitoring Project! Viceroys can be detected by the thin black line that up-curves across the hind wing of the butterfly that Monarchs do not possess. Viceroys also tend to be smaller and a little brighter in color. Unlike Monarchs, Viceroys do not migrate, and they breed on willow, as opposed to milkweed. Viceroy caterpillars can survive winter as caterpillars, and they have much more stable numbers since they don’t need to take long migratory journeys.

Your ticket for the: Monarchs and Viceroys: A Tale of Mimicry

Monarchs and Viceroys: A Tale of Mimicry