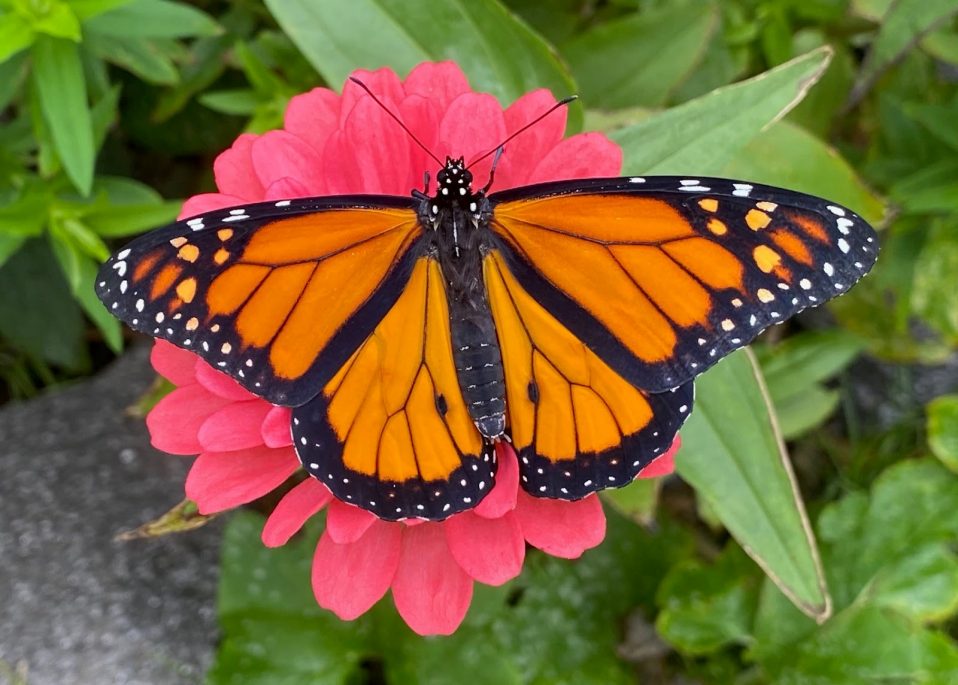 Our field season began yesterday, and we’ve been getting this year’s seasonal crew familiar with the census and other elements of the job. They’ll be conducting the driving census 3 times a day until October 15, then twice a day from October 16 to October 31. This is the 29th fall for this census, one of the longest running quantitative studies of any migratory insect. We’re seeing a few monarchs around the southern tip of New Jersey, but most aren’t showing migratory tendencies. This isn’t a surprise, early September monarchs in Cape May are usually part of the penultimate generation of the year, parents of the ones that will go to Mexico.

Our team has also started tagging monarchs.  With the help of volunteers, our team will probably tag between 2,000 to 4,000 monarchs this fall.  With luck, some will be found in the mountains of Mexico and a some of the places in between, helping us better understand the routes that monarchs take after passing through Cape May.

Here’s one of the first monarchs tagged this season. The tags are small adhesive disks placed on the underside of a monarch’s hind wing. Each tag has a unique code of 4 letters followed by 3 numbers. The web address mwtag.org is also printed on each tag. If you ever find a monarch with a tag, try to read the code (digital cameras work well for this, when you can enlarge the photo on your computer) and then go online to that site, mwtag.org, and click on the link: “Report your tag recovery here.” You’ll be asked to report the tag code, plus the date and location where you found the monarch. By reporting this information you’ll be contributing to our efforts to better understand details of monarch migration.

This year we dedicate our work to the memories of three great friends of monarchs from Cape May Point who all passed away since the end of our last field season.  Bill Schuhl, Pecki Witonsky, and Mildred Morgan were all great supporters of our project for many years.  The tagged monarch shown above was tagged in the garden of Pecki, where the new homeowners are maintaining the garden and welcoming our team to continue tagging at the hotspot for monarchs.  With each monarch tagged this year we’ll offer silent thanks to these three great friends; we miss them all terribly.

Your ticket for the: MMP Field Season Underway