This week on the Dike was fairly quiet in terms of large movements, but the slower days allowed us to really appreciate the newer arrivals! Yellow-rumped and Palm Warblers, those harbingers of the late season, were both present in decent numbers this week. We had hoped for a great flight on Saturday, which unfortunately never really materialized. Saturday was still our best day this week though, and featured our one rarity this week! 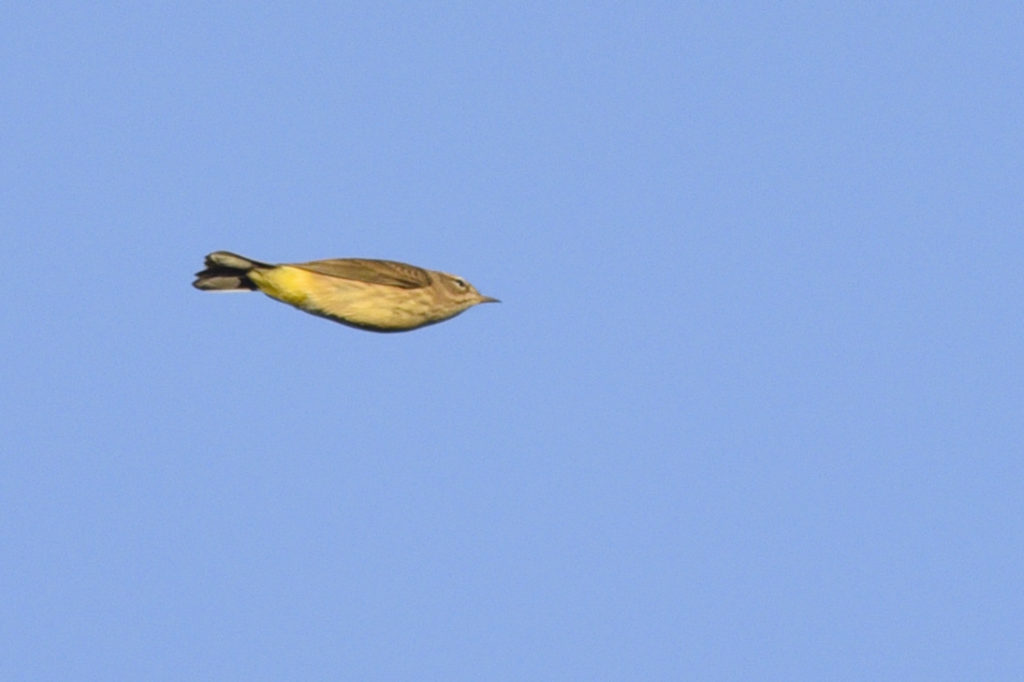 Palm Warblers made up a major part of this week’s migration. Photo by Daniel Irons

There were very few new arrivals this week, though two Yellow-bellied Sapsuckers were a nice addition to the flight on Saturday! Another new one was a beautiful adult male Rusty Blackbird that flew quite close this morning. We have seen a nice increase in Black-throated Blue Warblers and Dickcissels over the past few days. There are very few American Redstarts and Black-and-White Warblers left at this point, with just a handful of each over the past few days. Northern Waterthrush is almost entirely gone now, with only two seen early in the week. As I mentioned earlier, Saturday was by far our most impressive flight of the week, with a nice small flight of Palm and Yellow-rumped Warblers, and a few flocks of Bobolinks still “bink”-ing their way through Cape May. The highlight of the day came late in the morning though, in the form of a rare Swainson’s Hawk! This bird had been first seen on the Hawkwatch late Friday afternoon and continued into Saturday morning. After it was reported from the Magnesite Plant I began scanning intently in that direction, and was soon rewarded with brief but identifiable looks at the bird kettling with some Broad-winged Hawks. As far as I can tell this is only the third record from the Dike, and the first since 2012! The wind forecast for the rest of this week is mostly Northeast, switching to Northwest over the weekend. Here’s hoping for some large flights in the near future!

Your ticket for the: Morning Flight Update – October 7, 2019