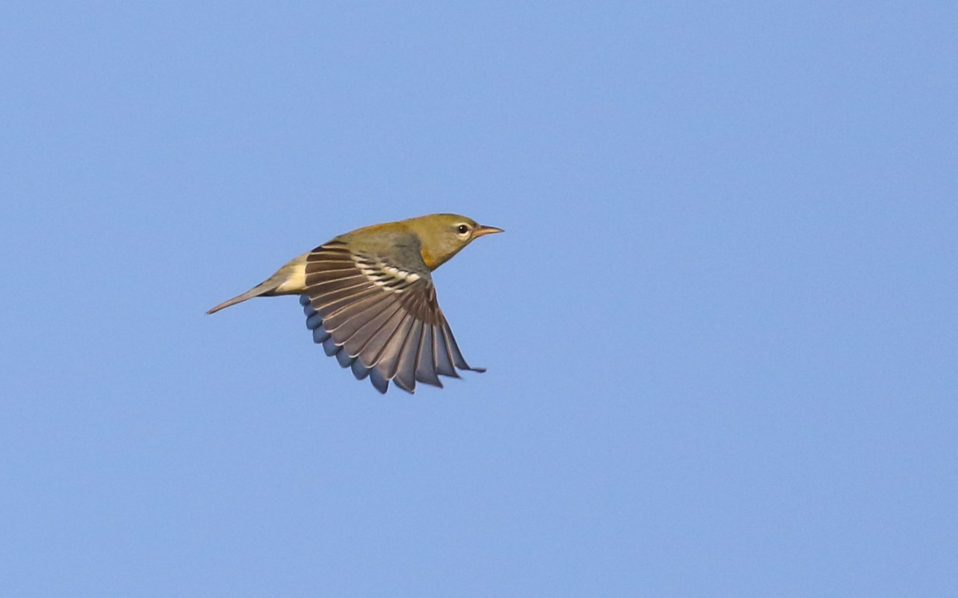 Hi all! My name is Jerald Reb and I’m super excited to be the Morning Flight Counter this fall! Some of you may remember me as one of the Interpretive Naturalists from the 2018 season. This season I’m looking forward to some spectacular flights past the dike, especially when the Yellow-rumped Warblers arrive in late October! In the meantime I’m loving the September diversity, with 16 species of Warblers counted just this morning. A Prairie Warbler perches up in a walnut tree at the Dike. Photo © Tom Reed.

Our season started August 1st, marking the second year with this extended early season period. Despite some slow days, we had some great totals in this time, establishing new single-day records for Blue-gray Gnatcatcher and Yellow Warbler on August 10th. This has become our second highest season ever for Yellows, with 805 to date! September has also produced some fantastic days so far, with our highest totals noted September 8th. That flight featured over 1,700 American Redstarts, along with 139 Northern Waterthrushes (also a new single-day record!). An American Redstart migrates past the Dike. Photo © Tom Reed.

This past week has included quite a few slower days, thanks to some overnight south winds. In spite of poor winds we’ve had a nice increase in diversity, including an influx of Black-and-White Warblers and Northern Parula along with small numbers of later migrants such as Blackpoll and Black-throated Blue warblers. So far we’ve had two Connecticut Warblers, up from one in 2018. How many will we end up with this season? A Northern Parula bounces past the Dike. Photo © Tom Reed.

This morning was another great day up on the Dike, with a flight featuring over 750 American Redstarts and 135 Northern Parula. We had 16 species of Warbler in total, plus a handful of other species such as Indigo Bunting, Baltimore Oriole, and Ruby-throated Hummingbird. A couple more notable species included Red-headed Woodpecker and a lovely Olive-sided Flycatcher; always a treat, especially this late in the season! A beautiful Olive-sided Flycatcher from this morning, certainly one of the highlights of the season so far! Photo © Tom Reed.

Winds during the next few days will primarily be out of the northeast; not ideal, but certainly better than the southerly winds we have been seeing lately! With birds bottled up to the north of us, hopefully we should have at least a few days of decent movement.