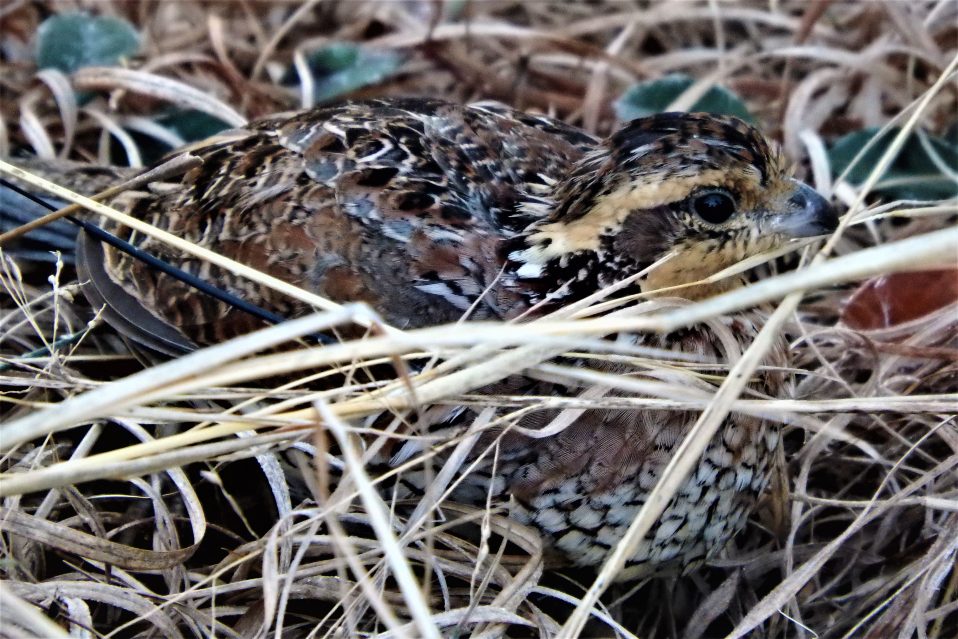 In the February 2021 edition of The Wildlife Society’s prestigious Journal of Wildlife Management, the first of several research papers associated with the Northern Bobwhite Restoration Initiative will be published.

The Northern Bobwhite Restoration Initiative was initiated in 2014 by New Jersey Audubon and brought together project collaborators Pine Island Cranberry Co., The University of Delaware, Tall Timbers Research Station and Land Conservancy, New Jersey Division of Fish and Wildlife, U.S. Fish & Wildlife Service, and Pine Creek Forestry. The Initiative was launched in conjunction with national efforts to address Northern Bobwhite population recovery across its historical range. Bobwhite have declined range-wide by 82% between 1966 and 2010, and is one of the most dramatic species declines in the U.S.  In New Jersey, the species is believed to be functionally extinct.

Shifts in farming practices, along with the loss of farmland and young forest habitat are the primary causes of the decline. To recover Northern Bobwhite, large tracts of quality habitat must be restored and managed and in some cases the reintroduction of the birds through translocation is appropriate. New Jersey Audubon led this unique partnership to restore Northern Bobwhite to New Jersey by initiating a translocation research project in the NJ Pinelands. The Pinelands was selected to be the focus of this research for many reasons, most notably previous research conducted by the NJ Division of Fish and Wildlife, and presented in their Northern Bobwhite Action Plan (2011), stated: “The Pinelands probably represents the greatest potential growth area for wild bobwhite within their range in New Jersey. This area once harbored substantial numbers of bobwhite when the woodlands had a more open canopy and well-developed understory of native herbaceous and woody plants.”

The crux of the research was to first determine if translocation of wild Bobwhite from states in southern latitudes can survive and carry-out their life cycle in the Mid-Atlantic region. Normally, in translocation projects, the source population of animals to be translocated should be as close to the same latitude as where the animals will be translocated to. However, in the case of Northern Bobwhite, the population decline is so significant across the range that only a handful of southern states have enough birds to allow for translocation elsewhere. As the supply of wild Bobwhite is so limited across the US, to receive any birds for translocation projects many landscape and habitat requirements, health parameters and project logistics must be met for the research to be permitted. Ultimately, NJ Audubon found a site within the NJ Pinelands that met the criteria to initiate the research.

Specifically, the research project evaluated “The Landscape Connectivity Hypothesis” which included, exploring the Bobwhite’s site fidelity, survival, including winter survival, reproduction, and resource selection following long-distance translocation. In addition to the Pinelands research site, a second research area was also included in the study to allow for comparison of a variety of factors involving the landscape, habitat and life cycle factors of quail. The second research area was in Kent County Maryland. 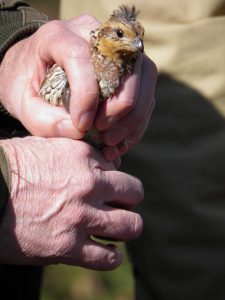 A Female Bobwhite Quail Fitted with a Radio Collar Transmitter at the Pinelands Study Release Site. Photo by John Parke

With the experimental translocation efforts in NJ ceasing in 2018, synthesizing the data has resulted in several manuscripts that are under peer-review. The first peer-reviewed manuscript accepted for publication is entitled, “Landscape Connectivity Influences Survival and Resource Use Following Long-Distance Translocation of Northern Bobwhite”, a collaborative effort involving The University of Delaware, Tall Timbers Research Station and New Jersey Audubon.

The scope of this paper was summarized in the paper’s abstract, noting:

“Given the scale of the Bobwhite’s decline across its entire range and inability to rapidly recolonize recently restored habitat, repopulating sites in northern latitudes that are distant from reliable source populations may require long‐distance trap and transport from southern locales, potentially compounding existing obstacles for this renascent population recovery technique. We evaluated the landscape connectivity hypothesis to determine if northern bobwhite survival, site fidelity, and resource selection following translocation differed between 2 contrasting landscapes in the Mid‐Atlantic region of the United States.”

Over the course of the project wild Bobwhite from northern Florida and southern Georgia were captured and translocated, to small, fragmented study site properties on the eastern shore of Maryland and large, contiguous study site properties in the NJ Pinelands Region of New Jersey (i.e., the Pine Island Cranberry property).

Findings of this research are summarized and indicate:

“Breeding season (182 days after release) survival varied among sites, and was generally higher at the New Jersey release area than at the 2 Maryland sites, yet an acclimation period is ostensibly required to obtain reasonable breeding survival estimates to elicit population growth. Site fidelity, maximum dispersal distances, and home range sizes were lower at the smaller, fragmented Maryland properties than the larger New Jersey properties. These results support the landscape connectivity hypothesis such that reduced connectivity in our study decreased site fidelity and survival. Temporal variation in survival was potentially an artifact of translocation stress or maladaptive behavior during initial acclimation to the release sites, indicating that higher stocking rates may be needed to provide adequate founder abundance for translocation success. Northern bobwhites used early-successional cover at all sites, though selection varied based on scale of analysis and landscape context. These vital rate estimates and resource use patterns should be used to guide future translocations within the Mid-Atlantic, provide perspective for this population restoration technique range wide, and stimulate further investigation into limiting factors.” NJ Audubon would like to congratulate project lead researcher Phil Coppola on receiving his Doctorate from the University of Delaware because of this research. We also would like to thank all involved in the project from the project partners, additional field staff and individual project supporters. Special thanks to the Pine Island Cranberry Company and the Haines Family Foundation for their continued support and stewardship efforts for wildlife and natural resource conservation!

The Northern Bobwhite Restoration Initiative continues, with ongoing data analysis and manuscript preparation summarizing the results of this initial phase testing translocation. Additional steps under consideration include further analysis and assessment through the development of a Translocation Decision Support Tool. New Jersey Audubon has ongoing efforts seeking property owners and famers with more than five acres of available land in the NJ Pinelands Region that could qualify for the USDA-NRCS Working Lands For Wildlife program funding to perform habitat conservation practices beneficial to Northern Bobwhite, a wide range of other Pinelands species, and supportive of wildfire risk reduction. For more information, please contact Stewardship Project Director John Parke at [email protected].

Your ticket for the: Northern Bobwhite Restoration Initiative Published in Journal of Wildlife Management!