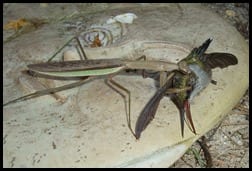 Hiking in a meadow in Sussex County over the weekend, I came upon a small semi-hard grayish-yellow mass attached to a goldenrod stem. This “foam-like” cube was an egg case of a praying mantis.  However, I was not as excited as some may think, because the majority of mantids in New Jersey are invasive species, specifically the Chinese Mantis (Tenodera aridifolia subspecies sinensis)

and the European Mantis (Mantis religiosa).

As with most invasive species, these two non-native insects pose an interesting threat to some of our most important pollinators, because of their indiscriminate predatory behavior and voracious appetite!

According to The Kauffman Guide to Insects of North America, “The Chinese Mantis entered the U.S. as early as 1896. It is still deliberately introduced to many areas as a (pest)control agent. Its efficacy is questionable, as it is an indiscriminate predator, taking beneficial insects as well as pests.” A much larger mantid (nearly twice the length of the European and Carolina Mantis) the Chinese mantis has a vertically striped face, bold green stripe along the edge of the forewing and a yellow spot between the arms.

Another introduced species in NJ is the European mantis. This mantis species was first brought here, accidentally, in 1899 on nursery stock from southern Europe, but was latter imported to the US in the 1930’s in commercially sold egg cases for garden insect control, as well as, later used as a biological control for Lymantria dispar in the eastern US. This species can be recognized by a black-ringed white spot on the inside of the front legs near the head and thin red and white “racing-strip” along the forewing.

A native mantis of NJ is the Carolina Mantis (Stagmomantis carolina), which can be identified by its small size (2-3 inches), mottled green or brown color and small wings, which when folded only cover about half of its abdomen.

Aside from their physical attributes, the shape of the mantis egg case (called the ootheca) can also be used to identify each species. The ootheca of the Chinese mantis are “cube-ish” and are as long as

they are wide. Where the native Carolina mantis’ ootheca is elongated and slender.

Born from egg cases, and as ravenous as their parents, the young mantises’ first meal is often their siblings! As they grow, shedding their skin 5 to 6 times, they use their strong front legs to capture not only spiders and insects (including butterflies, moths, and bees), but larger mantises such as the Chinese mantis have been observed to catch and devour small vertebrates including, amphibians, lizards, snakes, mice and small birds!

Reports of mantises preying on birds dates back to 1864, however more recent studies conducted between 2000 and 2015 that appeared in The Wilson Journal of Ornithology, indicated that in total, about 24 species of birds were identified as mantis prey. This group included hummingbirds and small passerines — perching birds such as sparrows and finches.  The study indicated that “once a bird was caught, its fate was as good as sealed, with only 2 percent able to free themselves from the insect’s clutches without human intervention.” Most notable in the study was that the birds most often captured and eaten by mantises in North America were the ruby-throated hummingbirds.

Although both native and non-native mantids are deadly predators that will use hummingbird feeders and wildflower gardens as their personal buffets, it is good to realize that the predator prey relationships are complex and can have strong indirect and cascading effects on ecosystem functions.

Additionally, contrary to popular belief, mantises are not protected by any state or federal laws.

Your ticket for the: PRAYING MANTIS – INDISCRIMINATE PREDATOR