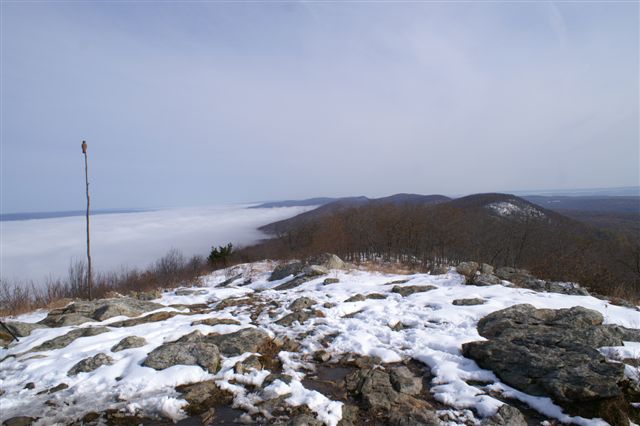 March 1,  marked the anniversary of the beginning of my Spring Hawk Count on Raccoon Ridge in 1976.  I still have the letter from then NJAS Research Director, Rich Kane,  welcoming me to the post.

I recall it was an inauspicious start, we were in a cold weather pattern and migrating hawks like a warm tail wind in Spring.  I went 10 days without a migrating raptor but there were lots of local birds to keep me company including a pair of Northern Goshawk, an adult male and immature female.  I remember well St Patrick’s Day.  The temperature never climbed out of the teens and my wind meter pegged at 70 mph.  Leaves hurt at that speed, not that I could feel them.  I had two birds all day.  Two adult bald eagles, using the updraft to head south, so uncountable.

As I recall, there was no snow on the ground that first year so the daily climb up the old Kaiser Road wasn’t too taxing.  But heck, I was 24, in great shape and my Kelty boots were broken in but otherwise new.  Not surprisingly, visitors were few.  But by the time the count ended, April 30, AT hikers were a daily occurrence.  On Easter Sunday I handed out jelly beans to through hikers.

It was a real treat watching Spring advance up the mountain.  Even the daily pattern was fascinating.  On cold mornings, the leaves of the mountain laurel at the foot of the ridge would be curled tight. After a day of warming sunlight, they would be unfurled.

I never saw a Black Bear.  They are regularly seen, now.  And surprisingly I never saw a rattlesnake, either.  There is a den just below Big Coon and by April the reptiles should have been stirring.  In fact, I’ve still not seen a Timber Rattlesnake in New Jersey.  Copperhead, yes, rattlesnake, no.  And since I no longer have the strength to get to Coon, I guess I’ll have to forgo the pleasure.

Nevertheless, it was a great spring, “My Spring.”  And every March first that passes reminds me that spring are finite, only so many per lifetime.  So every one deserves to be savored.  This one begins tomorrow, my newest spring in New Jersey, the Natural State.

Your ticket for the: Raccoon Ridge