Hi everyone!  We’ve come to the end of another Seawatch season! This December has been somewhat slow, so rather than give a day-by-day breakdown, I’ll just point out some highlights then give you a quick overview of the season totals!

December started out by continuing the November trend of gannets with over 4000 gannets on December 1st. But starting on December 2nd, numbers dramatically decreased across the board. December 6th brought a nice flight of geese with 1262 Canada Geese, 3 Cackling Geese, and 379 Snow Geese. Also on that day were three Common Goldeneye. The 7th continued this with 1154 Canada Geese, a Cackling Goose, and 57 Snow Geese. Also notable was a Common Merganser, rare at the Seawatch, and two Red-necked Grebes. Both the 7th and 8th had around 7000 birds, some of the best days this month. The 11th brought a humpback whale and a late Royal Tern, while the 12th had a Harlequin Duck. Three Cackling Geese in the center of a Canada Goose flock.

On the 14th, a Snowy Owl hung around the Seawatch for a while and even made a pass at some Mourning Doves enjoying the birdseed we scatter around our shack. 75 Common Eiders also headed southbound. On the 15th, a Ross’s Goose headed south with some Snow Geese, and a Dovekie flew past. The 16th brought 25 distant unknown alcids (probably Razorbills) and 3 closer Razorbills. On the 19th, a late male Wood Duck flew by, as did a Red-necked Grebe. Two Harlequin Ducks spent some time at the end of the Jetty on the 20th, and a late Royal Tern and two Laughing Gulls flew past. The last day brought four Razorbills, a Canvasback, and even an American Woodcock! 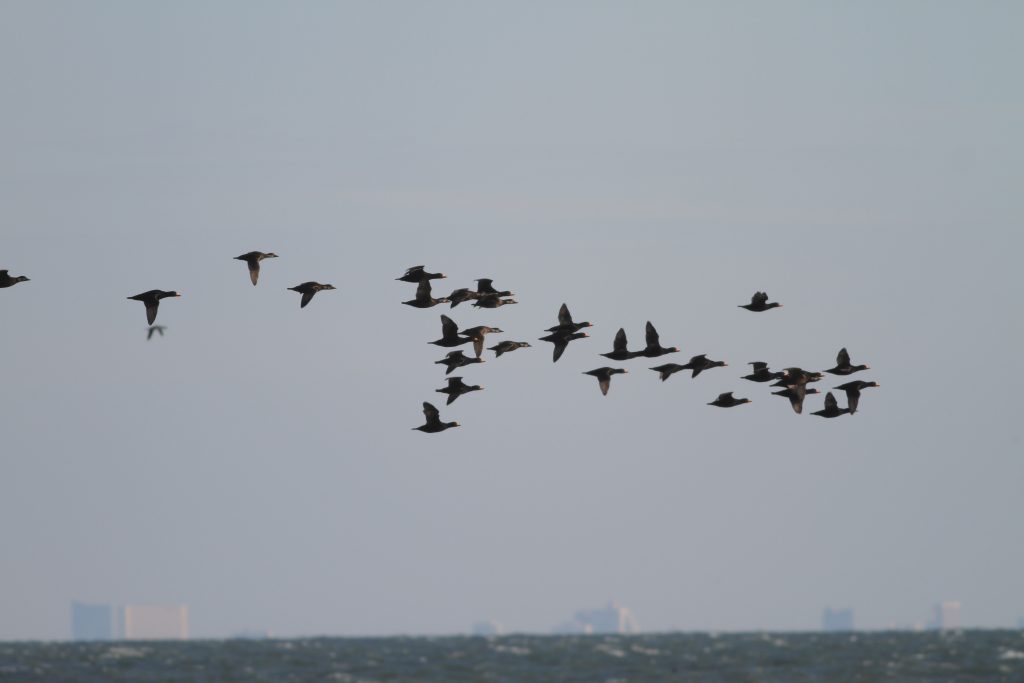 This has been a great season. We tallied over 780,000 southbound birds this season, just a bit more than all other seasons since we started using Trektellen in 2016. While the data still need to be reviewed for any errors, here are the current numbers for our Top 5 species:

Also worth mentioning are around 36,000 unidentified distant scoters and 23,547 Laughing Gulls.  Also, 855 Common Eider and 813 Brown Pelican are the highest season totals for those species in Seawatch history. Some rarities of the season include seven Ross’s Geese, one King Eider, 13 Harlequin Ducks, one Pacific Loon, three Brown Booby, 15 Black-legged Kittiwakes, a Little Gull, two Franklin’s Gulls, and a Dovekie.

Overall, an excellent fourth season for me. There really isn’t any better place to spend some time in the fall, in my opinion! Thanks for following along with the blog this season, and be sure to follow along or make it out in-person next year when things are hopefully more normal.

Your ticket for the: AVALON SEAWATCH UPDATE – December & Season Summary