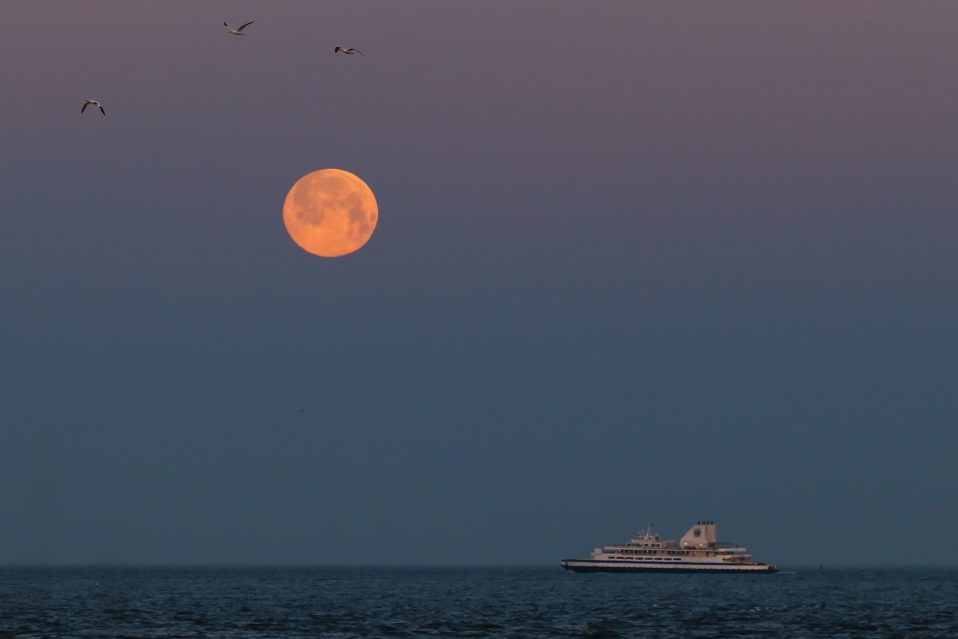 A nearly full moon sets over Delaware Bay on March 10, with Northern Gannets above and the Cape May-Lewes Ferry below. Photo © Tom Reed.

The Cape May Springwatch, a project of New Jersey Audubon’s Cape May Bird Observatory, takes place March 1 to May 31. The cornerstone of this effort is a visible migration watch at Coral Avenue, Cape May Point that starts at sunrise every day and continues for at least four hours– visitors welcome. This year’s Springwatch season is made possible by the generous support of collaborators Larry & Judy Winne, plus partnerships with data entry provider Trektellen and the Borough of Cape May Point.

To learn more about the Cape May Springwatch (and to view daily migration count totals), head over to our Springwatch information page.

WEATHER & MIGRATION SUMMARY
The week began with soft, remnant westerlies in the wake of a strong frontal passage on the 6-7th. A light waterfowl movement was the main event on the 8th, with a few blackbirds and grackles serving as the supporting cast. Southerly return flow gained an increasingly strong hold on the area’s weather as Sunday progressed, precipitating one of the season’s first obvious migratory movements during the following overnight period. Given our impressions of radar returns, we expected a fair influx of migrants on the 9th but were still a bit surprised to find a significant (by Cape May-in-spring standards) movement of geese unfolding over Delaware Bay. Included in this flight were 2,519 Canada Geese, 502 Snow Geese, 7 Cackling Geese, and a Greater White-fronted Goose. Additional notables that morning included a Piping Plover, a Razorbill, and 4 Pine Warblers in morning flight. Sustained southwest winds permitted migration to continue strong into the 10th, which featured an “echo flight” of 1,039 Canada and 109 Snow geese over Delaware Bay, along with the first migrant Golden-crowned Kinglet of the season in the Coral Ave dunes.

A dry, cold frontal passage late on the 10th put a dent in the mild conditions, with winds veering to north by daybreak on the 11th. The season’s first noticeable Pine Warbler movement was evident as 11 flew past Coral Ave and 7 were detected during the afternoon at Cape May Pt. State Park. A diverse waterfowl movement over Delaware Bay included 14 species, while nearly 1,000 Red-throated Loons congregated in the rips. Light onshore flow put a hold on landbird movement by the 12th, but as is often the case during such conditions, a number of ducks were on the move including 1,000+ scoters and 300+ Long-tailed Ducks. Precipitation associated with a warm front moved through during the early morning hours of the 13th, bringing a brief but heavy period of rain and even a few rumbles of thunder. Waterbirds again featured prominently in the soupy conditions, with 564 Long-tailed Ducks and 6,700+ Northern Gannets racing out of the bay. For the third straight week, a cold front moved through on a Friday—this time Friday the 13th, setting the stage for clearing skies and northerly winds to round out the week. Highlights on the 14th included a steady gull movement that was headlined by 13 Lesser Black-backed Gulls and a light but obvious raptor flight.

OTHER WILDLIFE
Count staff encountered a fair number of non-birds this week. The generally mild weather produced butterfly sightings on multiple days, primarily of Red Admirals (with some arriving from Delaware Bay) and unidentified anglewings (Eastern Comma or Question Mark). Completely unexpected was a Monarch seen flying north over Delaware Bay from Coral Ave on the 9th! Atlantic Bottlenose Dolphins are now a daily sight, with increasingly large pods noted as the week progressed. We also continued to enjoy daily sightings of seals from the Coral Ave platform, with both Harbor and Gray seals still present in the mouth of Delaware Bay. In the amphibian department, Spring Peeper, Atlantic Coast Leopard Frog, and New Jersey Chorus Frog were all reported from the Springwatch recording area this week.

MARCH 15-21 OUTLOOK
A peek at the upcoming week’s forecast shows a mixed bag of weather, with quick changes that seem to define the month of March. High pressure over Canada will drive conditions during the first part of the period, producing sustained onshore winds that are typically not conducive for landbird migration, but can be interesting for waterbirds. Some unsettled weather is possible Tuesday ahead of a cold frontal passage, which should bring along a brief period of westerlies (and better conditions for landbirds). High pressure behind this front is expected for a while on Wednesday, before some rain and strengthening southerly flow returns for a mild Thursday and even warmer Friday; migration could be moving along at a good clip during this period. It appears that a strong cold front could pass through at some point on Friday (potentially the fourth straight week for a Friday cold front!), with cool and dry conditions again bringing the week to a close.

NOTABLE SPECIES
The following rare, unseasonable, or otherwise noteworthy species were reported within the Springwatch recording area during the past week:

Greater White-fronted Goose: always very rare locally, a single individual was detected as it migrated north past Coral Ave with a flock of Canada Geese on March 9. It represents one of just a handful of spring records for Cape May County.

Cackling Goose: a total of 7 were found in flocks of migrating Canada Geese during a strong movement on March 9; this total potentially establishes a single-day high count for Cape May County.

King Eider: a female was reported from the South Cape May Meadows beachfront on March 11; the observer noted that this individual was associating with scoters.

Common Merganser: this species is always scarce at Cape May Point, especially on the heels of a mild winter. One female type continued on Lily Lake and the Cape May Pt. State Park ponds through at least March 12, and another flew west past Coral Ave with Red-breasted Mergansers on March 11.

Eared Grebe: very rare both locally and regionally, a single bird surprised our field staff when it put in a brief appearance on the bay adjacent to Coral Ave on the 12th. It was in winter plumage, associating with two Horned Grebes before flying off to the west/northwest.

Ruby-throated Hummingbird: the wintering, hatch-year female continues to frequent at least a couple of Cape May Point backyards; it has also been seen flycatching on warmer days. This hardy individual potentially represents the first March record for the species in Cape May County and is presumably in line to become the first to successfully overwinter.

Pectoral Sandpiper: this species is far more numerous across the interior than along the coast during northbound migration; we typically see just a few here across an entire spring season. It often occurs at Cape May during or after sustained westerly winds, as was the case when one flew past Coral Ave just after noon on March 14.

Long-billed Dowitcher: March is among the more unlikely months to encounter this species locally; two at the South Cape May Meadows on March 8 became three at the same location on March 12. It is unclear whether these individuals spent the winter nearby or if they perhaps arrived from points elsewhere.

Glaucous Gull: a first-winter individual put in a brief appearance on the Cape May Point beaches during the morning of March 7 and again March 8, but has not been found since.

Ash-throated Flycatcher: remarkably, the wintering individual at Cape May Pt. State Park continues its winter residency. It was found on multiple days again this week. This bird, and another that remains at Sandy Hook, likely represent New Jersey’s first March records of this western visitor.

Blue-headed Vireo: the wintering individual at Cape May Pt. State Park was seen again this week, putting in another appearance on March 9.

House Wren: also unseasonable, multiple individuals remained at Cape May Pt. State Park this week, another sure indicator of the lack of winter. True northbound migrants won’t arrive until the second week of April.

Nashville Warbler: at least one of two wintering individuals remained at Cape May Pt. State Park this week, recorded on multiple days.