CAPE MAY SPRINGWATCH: Mid-late May Summary Did we save the best for last? This Gray Kingbird, a very rare overshoot from the South, flew past the Springwatch on our last day of operation, May 31. It represents just the 9th Cape May record for the species. Photo © Jesse Amesbury.

Where did we leave off? Ah, right- the never-ending easterly winds! Well, it all changed on the 16th, with calm conditions and sunshine finally returning to Cape May. And with that change came some excellent sightings, including the count’s first-ever Pileated Woodpecker and a Eurasian Collared-Dove that put in a brief appearance. Close to 80 species were recorded this day, with other highlights including 2 Summer Tanagers and nearly 50 Indigo Buntings. Westerly winds returned on the 17th, bringing another fair landbird movement that was headlined by 593 Cedar Waxwings, and a smattering of shorebird that included an unexpected Red-necked Phalarope. The 18th was a quiet day, but this would be followed by 400+ Cedar Waxwings and the season’s first 3 Mississippi Kites on the 19th. The 20th was a low-volume/high-quality sort of affair, with just 146 individual birds tallied but White Ibis, Piping Plover, Parasitic Jaeger, and Red-headed Woodpecker among them. 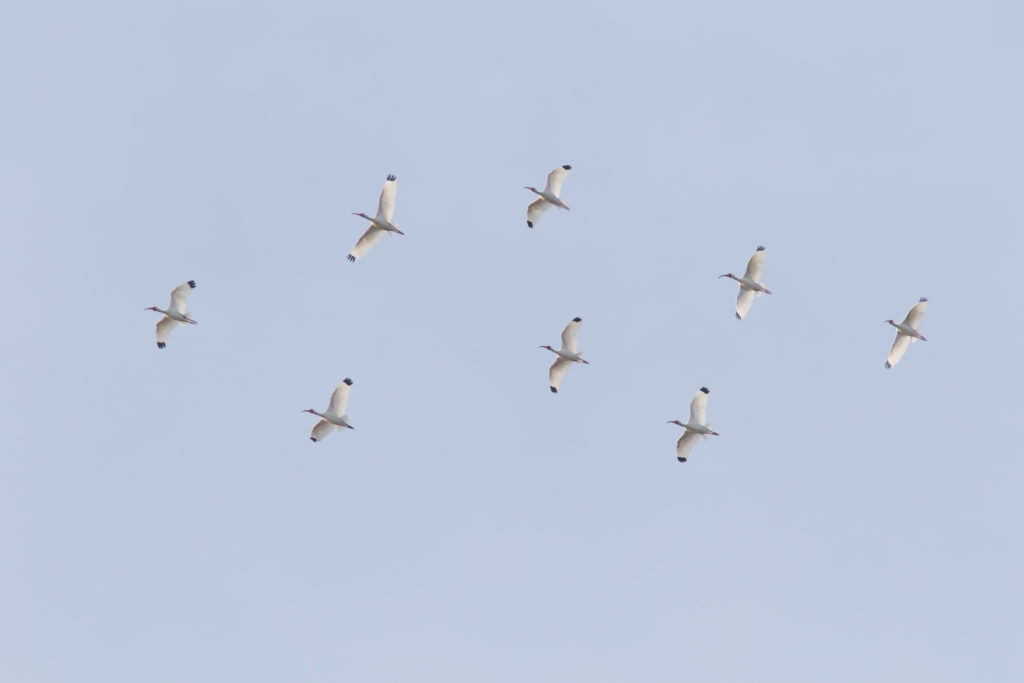 White Ibis continued to move past the Springwatch in small but steady numbers through the end of May. The final season total – 702.

Warm, southwest winds gained back control on the 21st, with another Black Tern making an appearance. A late-season pulse of Double-crested Cormorants served as a main feature of the 22nd, along with 2 Royal Terns. Diversity and numbers both ticked up following the passage of the cold front on the 23rd, with a White-winged Dove certainly playing the role of headliner; other front-related goodies on northwest winds included 22 Mississippi Kites, 10 Broad-winged Hawks, and 116 Eastern Kingbirds. Northeast winds returned for the 24-26th, something we generally don’t like– but by the 25th a fair Sooty Shearwater movement (28) was recorded, and the 26th brought a healthy total of 14 Wilson’s Storm-Petrels, an additional 27 Sooty Shearwaters, and singles of Roseate and Arctic terns! Generally light and variable winds produced small movements of shorebirds and songbirds through the 30th. The count ended with a resounding bang on the 31st, as a fairly diverse and steady movement for the project’s final day also brought two excellent rarities: Gray Kingbird and Magnificent Frigatebird!

It was another successful season at the Cape May Springwatch, made possible by generous support from Zeiss Sports Optics and from the continued vision and generosity of Larry & Judy Winne. We thank them, and we thank you, for an unwavering interest in our work. We look forward to seeing you again in spring 2023! Your ticket for the: CAPE MAY SPRINGWATCH: Mid-late May Summary

CAPE MAY SPRINGWATCH: Mid-late May Summary