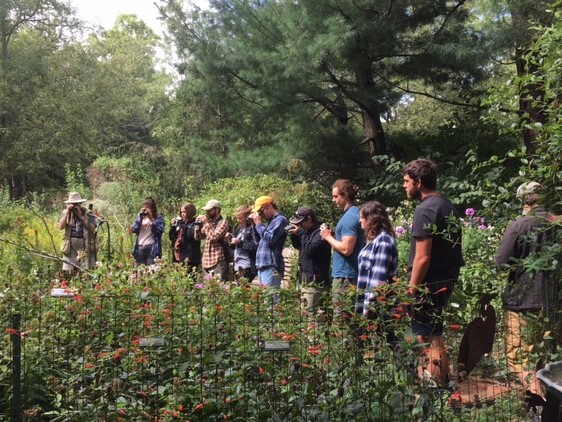 Here at New Jersey Audubon’s Cape May Bird Observatory, we strive to keep our finger on the pulse of migration. It is through the efforts of our dedicated seasonal counters and naturalists that we are able to not only quantify the migration, but also share the wonder and excitement of the birds and butterflies that so enrich our lives. They are the front line and face of the organization when it comes to educating, informing, and carrying out the NJA mission. Please welcome them to the community and spectacle that is Cape May and Montclair – stop by any of the migration count sites (Cape May Hawkwatch, Avalon Seawatch, Morning Flight, Montclair Hawkwatch) or Monarch tagging demos and experience it for youself. Thanks to Swarovski Optik NA and [email protected] for their substantial and continued support of our staff and projects

Without further ado, we are pleased to introduce the 2019 crew: This past fall Adehl was one of the Interpretive Naturalists for CMBO and is very happy to have returned to Cape May to be the 2019 George Myers Naturalist. She received her Bachelor’s Degree in Environmental Science with a minor in Chemistry in 2017 from Robert Morris University in Pennsylvania. She got her start in Environmental Education in college by interning at Fern Hollow Nature Center for several seasons and Hawk Mountain Sanctuary. She gained experience teaching summer camps, educational programming for students from pre-k to high school age and assisting with ongoing salamander research and environmental testing. After graduating from college, she went back to Hawk Mountain as a Conservation Science Trainee assisting with fall migration counts and programs, as well as conducting a movement ecology study focused on black vultures in the Kempton Valley. Her time at Hawk Mountain Sanctuary inspired her interest in raptor conservation and birding. Before working for CMBO last fall, she completed an education internship at Shaver’s Creek Environmental Center in State College, PA and backpacked through Vermont on the Long Trail. She just recently finished her time at the Nature Center of Cape May teaching the 9-12 year-old summer camp session and is looking forward to the excitement that fall brings! A sixth-generation area resident, Tom Reed is one of few birders who truly call Cape May home. He discovered birds at the age of 10 and was immediately captivated by the spectacle of migration visible from his Reed’s Beach backyard– be it Red Knots departing for the Arctic on late-May evenings, or Sharp-shinned Hawks bounding along the bayshore treeline after an October cold front. Tom started a hawk migration count along Delaware Bay at the age of 11 and has been actively involved in Cape May’s birding community ever since.

TR has traveled throughout much of North America since graduating from Rutgers University in 2011, with assignments ranging from wintering Piping Plover surveys in the Bahamas, to breeding bird atlas work in Wisconsin, to tour leading in Alaska, and naturally, several fall seasons at Cape May. He has also appeared at various local and national birding events and represented CMBO in Israel’s Champions of the Flyway competition since 2016. Tom is editor of the Cape May Annual Bird Report, sits on the Board of Directors for the Hawk Migration Association of North America, serves as a Regional Editor for eBird, founded and compiles the Mizpah Christmas Bird Count, and is a voting member of the New Jersey Bird Records Committee.

Tom has invested about 10,000 hours monitoring bird migration across all seasons at Cape May and was instrumental in the creation of CMBO’s Migration Count Coordinator position in 2015. Not surprisingly, his favorite birding takes place in wide-open spaces: oceans, grasslands, deserts, marshes, and anywhere visible migration occurs. Jerald grew up birding in nearby Delaware, with annual visits to Cape May sparking an interest in the migration counts conducted here. Spending time with the 2018 counter, Andrew Dreelin, on the Higbee Dike last fall solidified Morning Flight as his favorite of the three counts; while the spectacles of raptor and seabird migration are incredible, nothing beats the challenge of counting waves of warblers bouncing by the dike. After working in Cape May last fall as an interpretive naturalist, and again this spring as the Springwatch technician, Jerald is very excited to be returning as the Morning Flight Counter for the fall 2019 season! Jesse was born and raised in northern New Jersey but has lived in Cape May County the last 6 years, so he is no stranger to the magic of birding in Cape May. He became fascinated with birds at the age of 6 and has never looked back. His passion for birds and wildlife brought him to Stockton University where he majored in Environmental Science. For the past 6 summers he has worked for the Conserve Wildlife Foundation of NJ and NJ Division of Fish & Wildlife monitoring Piping Plovers along the southern New Jersey coast. He also spent fall seasons counting hawks at Hawk Mountain Sanctuary in Pennsylvania and at the Florida Keys Hawkwatch. Jesse has also worked at Edwin B. Forsythe NWR, where he was involved in various marsh related studies involving sea level rise, as well as American Black Duck banding. When not watching and photographing birds, he likes playing basketball and tennis. 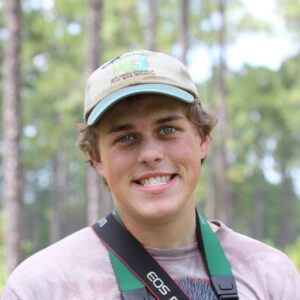 David is a graduate of Cornell University and a South Jersey birder from Newfield, NJ.  He has worked a variety of jobs involving behavioral observations of birds, breeding bird point counts, radar tracking of birds, bird banding, and being a naturalist and guide.  He is most interested in bird migration, abundance, and status and distribution over time and space.  David was the Montclair Hawkwatch Counter in 2016 and the Avalon Seawatch Counter in 2017 & 2018 and is excited to return to CMBO to count hundreds of thousands of seabirds and soak in the spectacle of visible migration in Cape May. 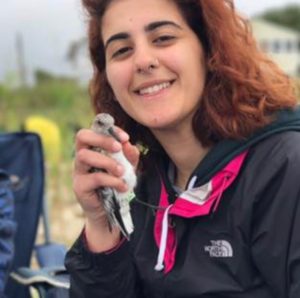 Taleen is currently working as an Interpretive Naturalist for NJA where she is educating the public about bird conservation, migration, and research through public outreach efforts. She was a field technician for NJA since May of 2018, and most recently worked as the Stone Harbor field technician monitoring endangered beach-nesting birds. She received her B.S. in Ecology, Evolution, and Natural Resources, as well as completed a minor in Environmental Policy, Institutions, and Behavior, in the spring of 2018. Taleen enjoys reading, hiking, camping, birding, and practicing guitar in her free time. 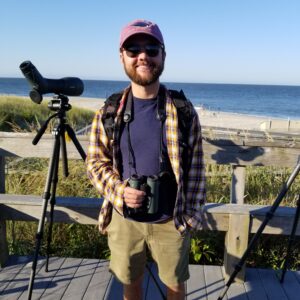 Billy is a class of 2018 Wildlife Ecology and Conservation graduate from the University of Delaware whose primary focus is ornithology. He has been a birder for nearly 10 years and has studied birds in a variety of places including the North Slope of Alaska, Puerto Rico, northeastern California, and here in the Mid-Atlantic.

This past year he expanded from research into outreach and education by working as a Naturalist Educator with the Truckee Meadows Parks Foundation in Reno, Nevada. Now, he is back in his home state and looking to give back to a community and organization that helped him find and solidify his interest in birds, ecology, and the unique resources that New Jersey holds. Megan’s first birding experiences were through the Bird Club of William and Mary, where she discovered her passion for bird identification and ornithology. Before coming to Cape May, Megan bounced across the country as a field assistant doing various ornithological research, most recently working on a long-term study of Acorn Woodpeckers at Hastings Natural History Reserve in California. A lifelong artist, she seeks to join outreach and the arts, and believes that learning to see in new ways can be a gateway to our understanding of nature. As an undergraduate, she worked as a Naturalist Intern with Huntley Meadows Park in Virginia, leading art lessons and communicating ecological threats to local parks through new signage. In her spare time, she creates birdy art in a variety of media, and was the American Birding Association’s 2019 Bird of the Year Artist. Megan is excited to share with others the same excitement she had during her first fall migration and can’t wait to find visitors’ spark birds. 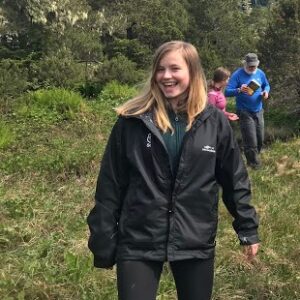 Victoria is a graduate of Sterling College with a degree in Ecology and an emphasis in Natural Resource Conservation. As an undergraduate, she worked as a research assistant for Sterling College. Through this position she conducted research in ecology, mycology, entomology and agroecology. She designed a number of research projects, including a long-term pollinator monitoring study. In her final semester she completed her senior thesis investigating the impact of invasive species on arbuscular mycorrhizal fungi in Vermont. In the summer of 2018, she worked on a research project conducted by the Forest Service in the Tongass National Forest on Prince of Wales Island, Alaska, collecting data on forest regeneration, forest health, and understory vegetation. This experience solidified her love of fieldwork, ecological research, and travel. She hopes to attend graduate school in the near future to continue studying ecology, conservation and entomology. She has always been interested in studying monarch butterflies and their fascinating migration, so is thrilled to be a part of this year’s study with New Jersey Audubon and participate in conservation efforts through the Monarch Monitoring Project. 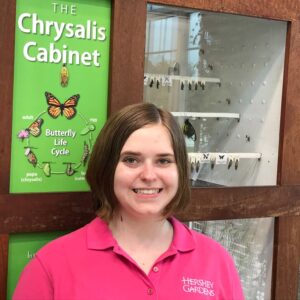 Anya recently graduated from Lebanon Valley College with a B.S. in Environmental Science. While in college, she designed and implemented a native plant garden on campus to help provide habitat and food for native wildlife. This included milkweed and other butterfly host plants. she also had the opportunity to intern at the Hershey Gardens Butterfly Atrium. During that time, she helped educate the public on a variety of arthropods (most notably butterflies), raised caterpillars, and tended to the Hershey Gardens’ insect collection. She has fond memories of searching her backyard for Monarch caterpillars and butterflies as a child, and looks forward to creating new memories through the Monarch Monitoring Project! She’s excited to assist in the research, conservation, and education of these remarkable creatures so that others may experience them in the future. David grew up in Texas, where he began birding and enjoying the avian diversity of the state from a young age. His love for birds and wildlife fostered his decision to pursue a B.S. in Environmental Science from Baylor University in Waco, TX. Upon graduating, he interned for the nonprofit organization Sea Turtle, Inc. on the Texas coast and assisted in conservation efforts for the Kemp’s ridley turtle, while also volunteering to lead birding tours through the island’s bayside wetlands. Following this, he interned for another nonprofit in North Carolina, the Bald Head Island Conservancy, where he conducted shorebird point count surveys and led birding tours. From there, he returned to the Texas coast to work for the National Park service for the spring of 2018, just in time to witness the migration fallouts! After this, he moved to upstate New York to represent the state’s Department of Environmental Conservation as a seasonal technician. There, he mist netted songbirds as part of a contaminant monitoring project and conducted winter raptor surveys in the Hudson Valley. These surveys motivated him to pursue a hawk counting position, and he is excited to benefit bird conservation efforts and carry out New Jersey Audubon’s mission as Montclair’s 2019 hawk migration counter.

Your ticket for the: CMBO FALL 2019 NATURALISTS AND COUNTERS