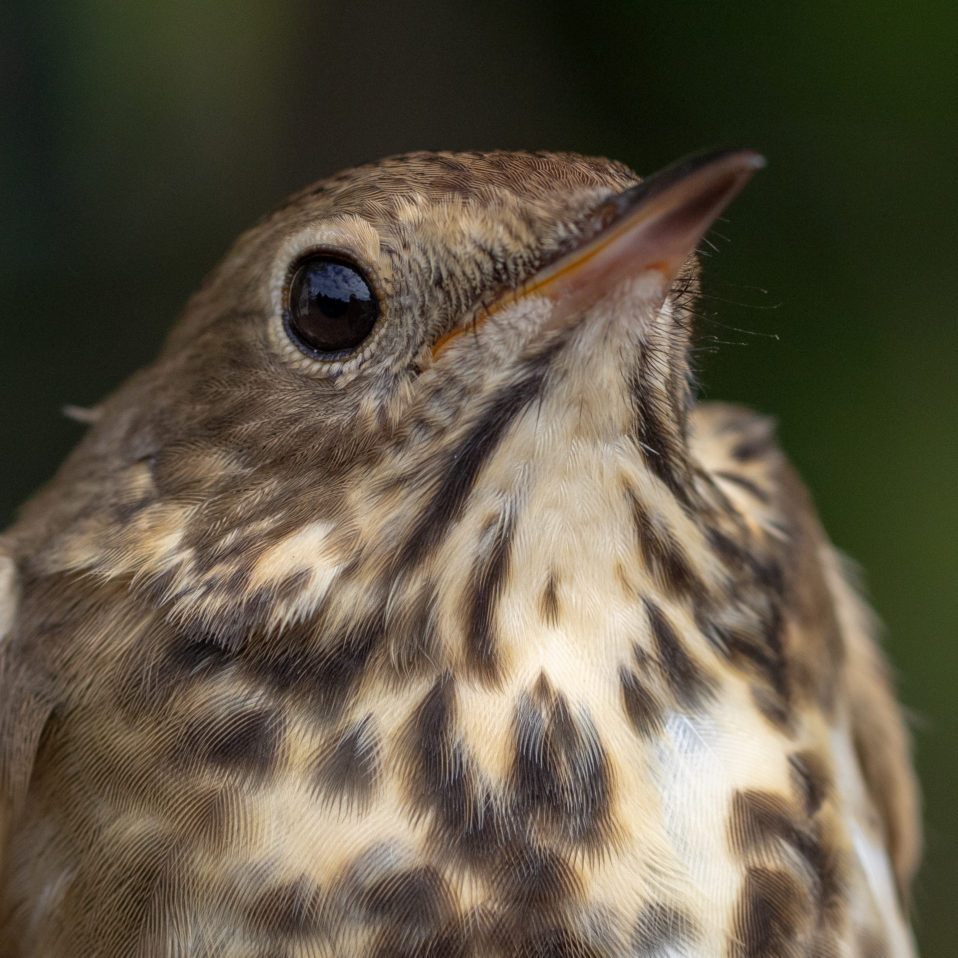 Photo above is a close-up of our first Hermit Thrush of the season…but we expect many more in the weeks to come!

Week nine of our inaugural banding season here in Cape May was quite the departure from the beginning half of the season. There was no banding on the 11th or 12th due to storms & excessively high winds. But, with strong northwesterly winds in the fall come the birds and wow, they did not disappoint. Although there was no banding on Friday the 12th, everyone from the station spent most of the day at the CMBO Hawkwatch platform absolutely mesmerized by the record-breaking flight of American Kestrels. Between the hours of 10am and 11am, they counted 1,577 individuals and ended up totaling 5,406 American Kestrels for the entire day! It was such a momentous occasion, one for which Cape May is known, and we were all thrilled to be there to witness it. The winds blew in more than just a ridiculously large number of tiny falcons, it also pushed in the passerines. When we reopened the station on the morning of the 13th, we had our nets full of birds. Over the course of the morning, we banded 436 birds of 38 species!! Yes, you read that correctly; this was our biggest day to date. We had 11 First of Season (FOS) species: Tennessee Warbler, Yellow-bellied Sapsucker, White-throated Sparrow, White-crowned Sparrow, Field Sparrow, Chipping Sparrow, Savannah Sparrow, Winter Wren, Golden-crowned Kinglet, Purple Finch, and Hermit Thrush. We had a tremendous crew on hand to help us process all of the birds quickly & safely and we couldn’t have asked for a smoother morning. At one point, we were even concerned that we might run out of size 0 bands and we sent volunteers up to our office to retrieve more. It was also the first morning that we had to have two banders processing side by side, which was not an easy task in our relatively small station for them or for the scribe who did a phenomenal job keeping up with the data that both banders were giving him. The whole morning exemplified excellent teamwork in action! And again, everything went smoothly; it was our first big “test” of what happens when Yellow-rumped Warblers (MYWA) descend upon a coastal site in the fall and we like to think that we passed with flying colors. You might still be thinking: 38 species in one morning?!! Yes, and it was amazing! Highlights were the 3 Yellow-bellied Sapsuckers, perhaps the only ones we’ll see in the hand this fall, our second Pine Warbler of the season, and the 5 Yellow-billed Cuckoos because one can never have too many cuckoos! It may come as no surprise that 252 of the 436 birds banded were MYWA. The invasion of the “butterbutts” has begun! “Who are you calling Yellow-bellied Sapsucker!?” © David La Puma

Sunday, October 14th was another big day with 314 birds banded of 29 species. Once again, more than half of the birds banded were MYWA (202). Due to the high water levels from the storms, we were unable to open all of nets but we did still have 14 of our 17 nets opened for the entire morning. We also placed a LifeTag™ transmitter on a Carolina Wren, which, unbeknownst to us at the time, would turn out to have a personality befitting of its band number which ends in 007. But, more on him/her in a future post! After closing up, we headed up to the airport to pick up the first of two young professionals that CMBO was hosting as part of the multi-national bird observatory Young Professional Exchange Program. Although they’re considered professionals young in their careers, most ringers in Europe start their extensive training at a much earlier age so, by the time that they are in their early twenties, they’ve been banding/ringing for more than half their lives. Needless to say, we were excited to meet her & have her help at the station over the next two weeks! Monday, October 15th was a little slower than the previous two days with only 107 birds banded of 13 species. It’s funny how quickly we all switch from thinking that a 100+ bird day is huge to thinking that ah, it’s just okay. Haha how quickly things change when MYWA happen! The slower morning was most likely due to the rain and wind gusts which delayed opening and prevented us from opening all but eight nets. But even so, 107 birds captured in half of our nets in a shortened morning is still impressive. We also put a LifeTag™ out on a Northern Cardinal, a species that was particularly of interest to our CTT partners as they wanted to test out their newly reinforced harness & tag on a species that well, bites hard. One big advantage of placing these tags on local species is that we will be able to recapture them again & again to see how the harness is holding up, if any changes need to be made, etc. So, it will be interesting to see if and for how long the cardinal is able to keep on its harness as well as to track its local movements.

Tuesday, October 16th we banded 122 new birds (95 of which were MYWA!) of 15 species, including our first White-breasted Nuthatch (WBNU) of the season. I want to take this opportunity to point out that, as banders, we often get to see and experience things slightly differently with a species in the hand than one would in the field. This isn’t always great (hint, certain species really love to eat berries in the fall that stain your hands and clothes dark purple) but, sometimes, like with WBNU, it can be. White-breasted Nuthatches spend most of their lives basically rubbing their bellies along tree trunks as they forage for food. Not just any trees though, they prefer mature deciduous woods such as maple, hickory, and oak, which means that they can smell absolutely wonderful in the hand! Also, of note is the Blackpoll Warbler (BLPW). Most of you will probably be aware of the absolutely amazing migration that this species performs each fall, travelling nonstop over open water from the eastern seaboard of the United States to their wintering grounds in South America. But, one thing you don’t get to experience in the field is the reason banders have lovingly nicknamed these birds “fatpolls.” A BLPW’s average weight (normally) is roughly 10-11 grams. On fall migration though, they can easily double that weight, topping the scales at 21-24 grams! As if these small birds weren’t already amazing enough, their incredibly long wings, which also help them fly out over the open water, continue to support the same bird now weighing twice as much! The morning of the 16th we processed our first “fatpoll” of the season, which weighed over 21 grams! Everything from reaching into the bag that was housing it and finding a giant ball of squish to blowing on its furcular hollow, its abdomen, and its wing pits and finding nothing but bulging bright orange fat deposits to weighing it was an absolute treat. This hatching year individual still had one heck of a journey ahead but, from what we saw, it appeared to be quite ready for its first trip to its wintering grounds. Best of luck little buddy! Blackpoll Warblers exhibit one of the greatest migrations of all North American songbirds, migrating for three or more straight days over open water between their launching off point somewhere along the Mid-Atlantic/Northeast coast and the Caribbean or South America! © David La Puma

October 17th we processed 212 birds (205 new) of 32 species. Again, more than half were MYWA (150), which we’re starting to suspect is going to be an every day thing now at least through October. We had our first Red-bellied Woodpecker of the season, which was an absolute, albeit loud, delight! For the second day in a row, we were able to open all 17 nets for the standard operating hours. Highlights besides the woodpecker were the two Cooper’s Hawks (well, three but one big female extracted herself from the nets before we got to her) and the three Yellow-billed Cuckoos. We also had a stunning adult male Tennessee Warbler as well two more Cape May Warblers. Our first Red-bellied Woodpecker of the season! © David La Puma

To say the ninth week of our inaugural banding season was exciting might be a bit of an understatement at this point. We banded a record 1,184 birds of 48 species, including 13 FOS species! We operated nets on five of the seven days for a total of 459 mist net hours (mnh). We got to witness the record-breaking day of American Kestrels at the Hawkwatch and added an experienced UK “ringer” to our team just in time for the MYWA fall invasion. We recaptured 34 individuals of 10 species, including one MYWA on two consecutive days. We put out two more LifeTags™ as part of our collaborative project with CTT, one on a Carolina Wren and one on a Northern Cardinal. Yellow-rumped warblers absolutely dominated this week’s totals with 788 individuals banded. Gray Catbirds came in second with 52 individuals banded and Song Sparrows were third with 37 individuals banded. We are not sure what happened in September but, now that we’re into the second week of October, we can finally say that it feels like fall migration is finally ON! We can’t wait to see what the rest of the month brings! one of many Cape May Warblers seen during the week, this one in the cedars adjacent to the Cape May Hawkwatch. © David La Puma