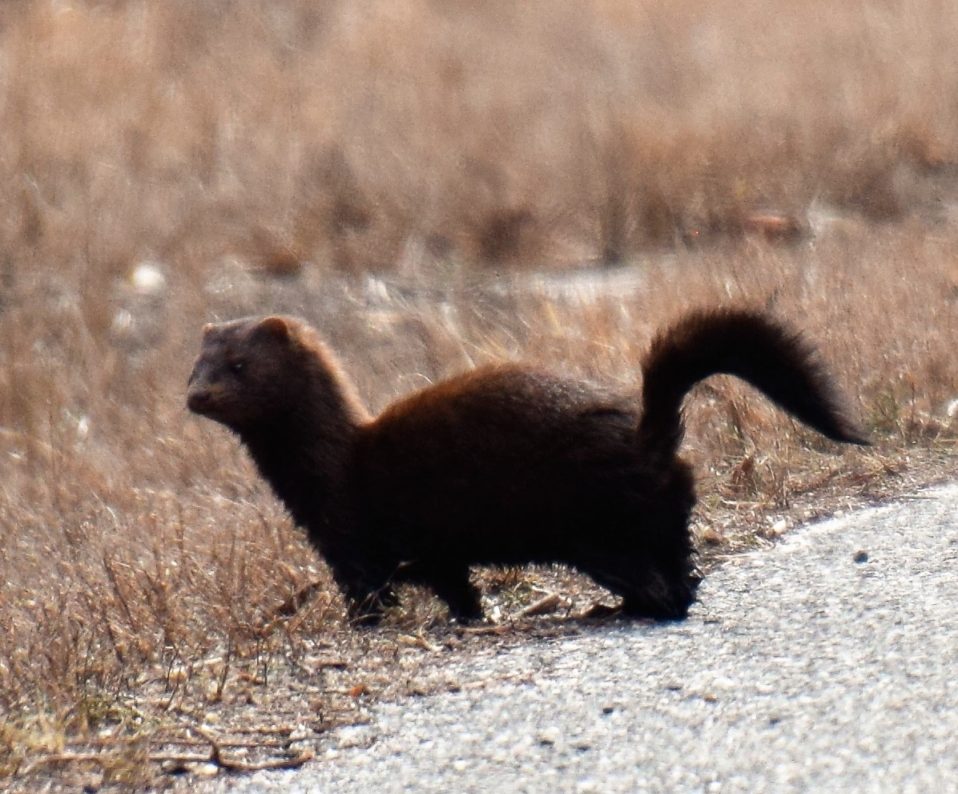 We were approaching the end of my Monday Morning Medadows walk, when a patron announced that there was a perched hawk up ahead.  The bird, seated eye-level and thirty yards away proved to be an immature Red-tailed and it was feeding on prey.

A muskrat, some deduced, noting the dark fur.  A squirrel others assessed, seeing the furry tail.  Muskrat do indeed have dark brown fur but rat-like tails.

We left the hawk to its meal and ended the walk without a consensus regarding the animal.

Later, at breakfast, Janet Crawford allowed that the animal had white nails.

There is indeed a New Jersey mammal that has dark fur, a bushy tail and white claws.

This is a mink, a medium-sized aquatic hunter in the weasel family.  Mostly nocturnal and bound to aquatic habitats, they are not commonly seen but they are also not particularly uncommon, no more uncommon than any other predator.

In the marshes of Delaware Bay, they are quite common.  I see five or six a year.  Usually animals running across the road.

Last December, wife Linda enjoyed the company of a mink at the Dividing Creek impoundments.  The animal was placidly consuming a fish and showed no interest in leaving.

Needless to say I was jealous.  Typically, with mink,  a glance is all you get.

But the Red-tailed’s catch recalled another encounter with a mink.  This one, too was in the talons of a Red-tailed and was likewise undiagnosed until I reached a point in the road up ahead where a set of mink tracks ended with the imprint of two sets of primaries imbedded in the snow.

Just because you are a predator doesn’t mean you are immune from predation.

And you simply never know what wonders you’ll encounter on a trip outdoors.

See you in Cape May and we’ll see what Ma Nature is dishing up.

Your ticket for the: Mink by deduction