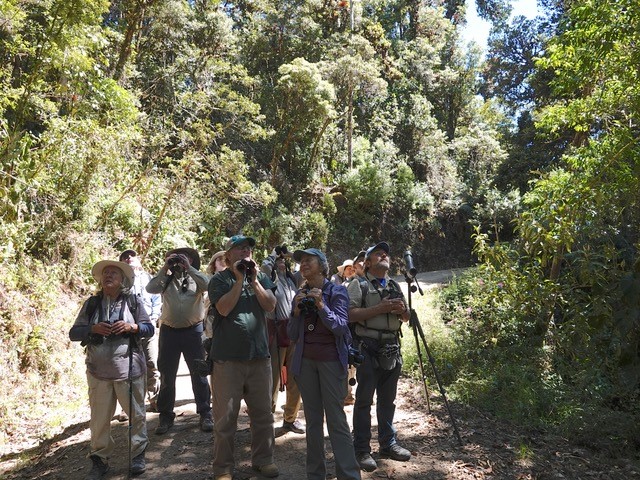 The NJ Audubon 2019 Costa Rica trip was another successful and enjoyable visit to this diverse Central American nation. Led by renowned Costa Rican naturalist Charlie Gómez, CMBO Associate Naturalist Mark Garland, and our driver Marco “Niño” Morales (who doubles as an extra birding guide), our group explored a variety of habitats and tallied sightings of nearly 400 species of birds. Here is a summary of a few of the highlights.

February 2: Most members of the group arrived in time to enjoy a late afternoon stroll through the gardens at the Bougainvillea Hotel, and we did some birding in the garden again the following morning. This is a great spot for an introduction to the mix of tropical resident birds along with neotropical migrants. A few of the highlights were Tropical Kingbird, Lesson’s Motmot, Hoffman’s Woodpecker, Rose-breasted Grosbeak, and Summer Tanager. 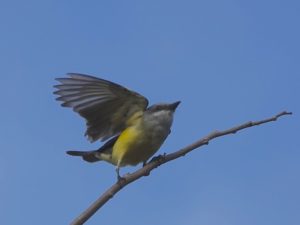 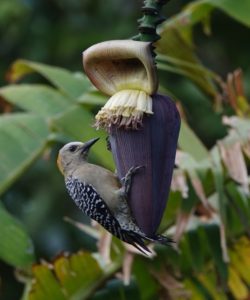 February 3: After morning birding and breakfast we traveled south and uphill, into the Talamanca Mountains arriving at our next lodge, El Toucanet, in time for lunch. After birding combined a short journey uphill along the quiet road adjacent to the lodge and explorations of the lodge grounds. We enjoyed great looks at a pair of Resplendent Quetzals, the lodge’s namesake Emerald Toucanet, Tufted Flycatcher, and others, while back at the lodge some of the highlights included Spotted Wood-Quail, Talamanca Hummingbird, and Silver-throated Tanager. Just after dark we enjoyed great views of a Bare-shanked Screech-Owl. 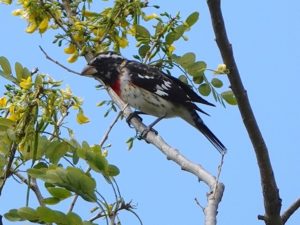 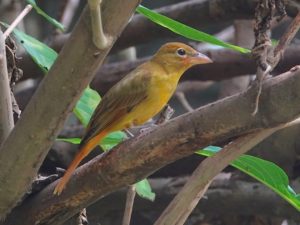 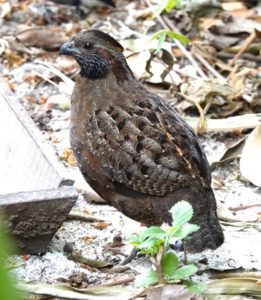 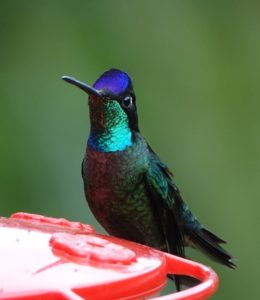 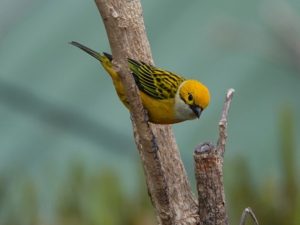 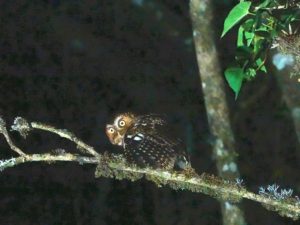 February 4: We journeyed up to higher elevations in the mountains this day, exploring areas between 8,000 and 9,000 feet above sea level. Collared Trogon, Lesser Violetear, Flame-throated Warbler, and Large-footed Finch were among the more cooperative birds that we enjoyed.

February 5: A bit of birding at the lodge started our day, with a White-winged Tanager putting on a great show for us. We headed south, pausing at the 11,000 foot elevation to see Volcano Junco, a bird only found at the very highest elevations of Costa Rica and western Panama. We stopped for lunch at Talari Lodge, where the bird feeders attracted beauties such as Bay-headed Tanager and Speckled Tanager. Next came a special stop for the brilliant Turquoise Cotinga. We ended the day overlooking the Pacific Ocean at La Cusinga Lodge.

February 6: We spent the entire day at La Cusinga. The morning started with a great show of birds from the lodge’s overlook, with Yellow-throated Toucan, Fiery-billed Aracari, and Red-lored Parrots just a few of the conspicuous birds. Magnificent Frigatebirds soared overhead, while White-throated Capuchin monkeys hung out in the trees. We walked forested trails to a secluded beach, found an owl butterfly in the late afternoon, and enjoyed sunset over the Pacific at the end of the day.

February 7: We drove north this morning, paralleling the Pacific Ocean, and arrived at our next home, Cerro Lodge, in time for lunch. Our afternoon walk took us along a secluded road through the Tarcoles River floodplain, where many birds were seen. Highlights included Scarlet Macaw, Double-striped Thick-knee, Streak-headed Woodcreeper, and Ferruginous Pygmy-Owl.

February 8: We walked in Carara National Park this morning, where one highlight was a group of army ants attended by a number of birds, who were feeding on the small creatures fleeing from the ants. Bicolored Antbird, Great Tinamou, and Streak-chested Antpitta were among those putting on a great show. At mid-afternoon we took to the water for a 3-hour cruise along the Tarcoles River and into the mangrove habitat. Crocodiles cruised in the river, iguanas roamed the banks, and birds were everywhere, with great sightings of Bare-throated Tiger-Heron, American Pygmy-Kingfisher, Prothonotary Warbler, and many others. Back at Cerro Lodge after dinner we tracked down a cooperative Pacific Screech-Owl.

February 9: Great looks at the rare Yellow-billed Cotinga right at the lodge began our day, and then White-throated Magpie Jays came to the lodge’s fruit feeder. Next we drove across the mountains, stopping briefly for a bit of birding and a waterfall vista. We continued into the Caribbean lowlands and La Isla Lodge, where we would spend the next 3 nights. A stroll through the lodge grounds got us familiar with this new habitat, and of course there were birds to enjoy, including Olive-throated Parakeet and Groove-billed Ani.

February 10: We visited the fabled La Selva Biological Field Station this day, with a midday break back at the lodge. La Selva never disappoints visiting birders, and we can’t list everything that was seen this day, but a few of the species that posed for us were Broad-billed Motmot, Fasciated Antshrike, Chestnut-colored Woodpecker, and Rufous Mourner. We enjoyed other wildlife, including Mantled Howler Monkey and Yellow Eyelash Viper.

February 11: Our morning was spent with a local birder who has set up an elaborate feeding station in his yard, where we enjoyed great looks at many birds – Green Kingfisher, Crimson-collared Tanager, Orange-chinned Parakeet, and Pale-vented Pigeon, to name a few. In the nearby countryside we were treated to views of Spectacled Owl, Great Potoo, Strawberry Poison-dart Frog, and Honduran White Bats. In the afternoon we enjoyed hummingbirds and mixed flocks of songbirds at a private garden adjacent to Braulio Carrillo National Park.

February 12: An early morning walk at the lodge yielded great views of Bicolored Hawk and Prairie Warbler, the latter being very uncommon in Costa Rica. On our way back to the capital city we stopped again in the mountains, where the bird feeders at a small roadside café lure many birds into view, including Prong-billed Barbet, Coppery-headed Emerald, Green Honeycreeper, and Buff-fronted Quail-Dove. We settled into our final’s nights lodge, the Trapp Family Country Inn, and enjoyed a nice dinner together. The following day was departure day, with everyone starting the journeys back home. 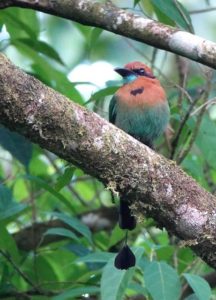 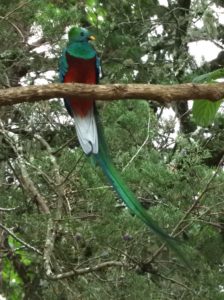 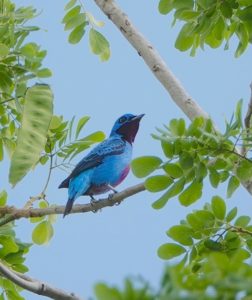 Photos and story by Mark Garlund

Your ticket for the: Costa Rica Trip