The weather on the majority of the days this week has not been conducive to raptor migration observation. From Tuesday the 29th through Thursday the 31st, slow winds from the southeast and high humidity were present along with thick, low fogs. During the most foggy hours of these days, the low clouds shrouded most of the view from the platform, with the exception of the grove and trees in the immediate vicinity of the platform. 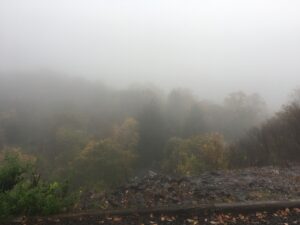 The moisture was often substantial enough to precipitate from the atmosphere, and steady drizzles interspersed with a few short showers occurred. Despite the low presence of raptors on these days, the cool, dawn-like persistent throughout the days encouraged passerine activity. The vicinity of the platform was occupied by many sparrows on these wet days, including White-throated, Song, Fox, Chipping, Eastern Towhee, and Dark-eyed Juncos; the last and first species listed being the most numerous. 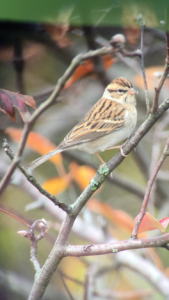 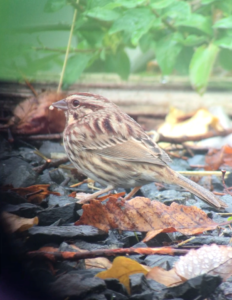 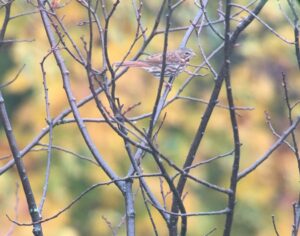 The sole Fox Sparrow of the week (and the first I’ve seen this season from the hawkwatch).

The local raptors of the area stayed within much closer view, likely due to the lack of thermals. On all three of the fog and drizzle-filled days, a juvenile red-tailed hawk picked its favored perch on a tree directly to the right of the platform, giving excellent views. While perched, it surveyed the surrounding grove and preened its damp feathers. 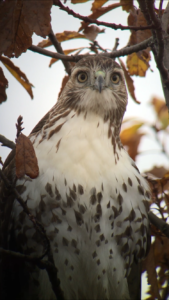 Friday the 25th and Monday the 28th brought more favorable weather, and on both of these days Merlins, both vultures, as well as Sharp-shinned, Cooper’s, and Red-tailed Hawks migrated through in small numbers.

Your ticket for the: Montclair Hawkwatch Update- October 31st