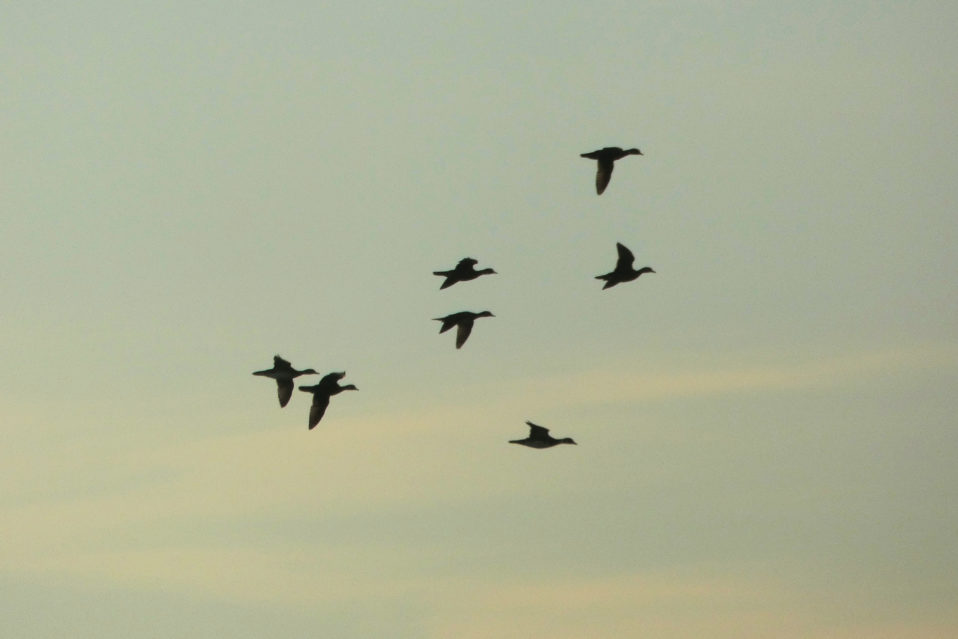 A group of Wood Ducks migrating in the early morning. The West winds have provided a good diversity and abundance of non-scoter ducks, which provides a good ID challenge in the morning light.

Things have been quite busy over at the Seawatch the past few weeks; thanks to everyone who has stopped by! Some interesting birds have been showing up as well as the large flocks we’ve come to expect in November.

Starting off, three Pacific Loons were seen at the Seawatch in a period of one week, with the first being spotted on the 3rd, and two were seen by Tom Reed on the 8th and 9th. This is a great bird to spot on the East Coast and having three on the count is terrific. Also on the 9th, Tom had a Red-necked Grebe which is hard to find down at Cape May and a Franklin’s Gull, a good rarity from the Midwest. 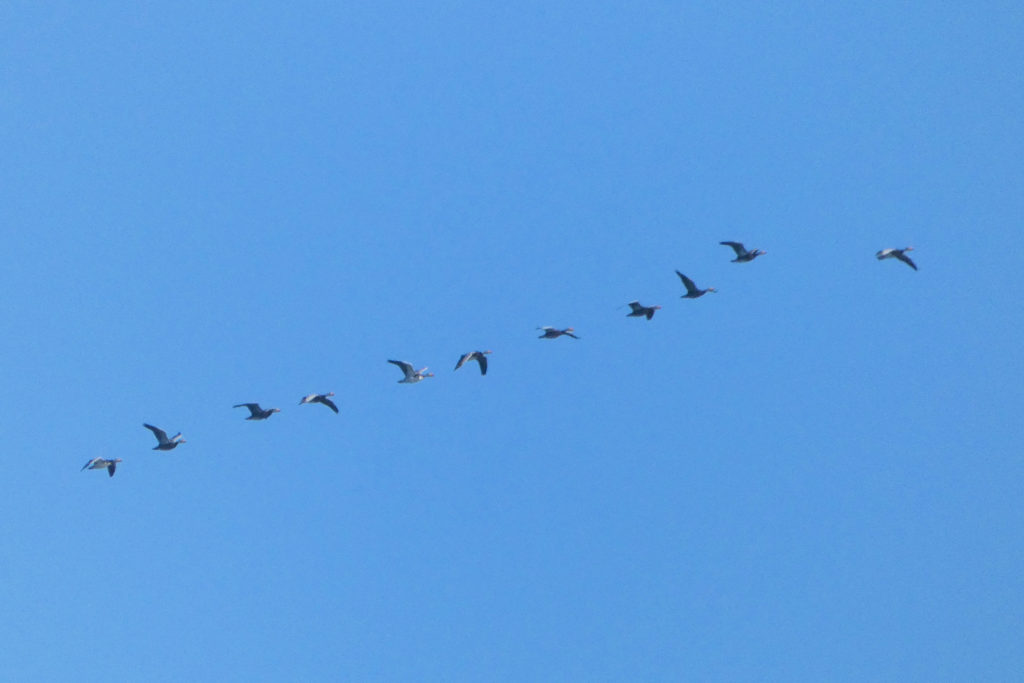 A flock of 11 Snow Geese coming off the ocean heading for shore. Many of these birds are intermediate morph birds, with both dark and light coloration. Typically a flock would contain mostly white morph birds.

There were strong North winds for several days starting on the 4th, which brought tens of thousands of scoters; however, many of them were too far out to identify to species. This seemed to be the last big push of scoters; however, more of the winter ducks such as Bufflehead, Long-tailed Ducks, Red-breasted Mergansers, and Hooded Mergansers have started to arrive. The Snow Geese have also started to arrive, starting on the 11th, with several flocks of dark morph and intermediate morph birds, as opposed to the white morph which is typically seen. In addition, the first flock of Tundra Swans were spotted on the 19th when a flock of ten came around Atlantic City and hugged the shore until they passed right by the jetty.

The dabbling ducks’ numbers have been quite high this year which may be due, in part, to the seemingly constant West winds. The 11th and 17th brought 1,002 and 1,750 Green-winged Teal, respectively, and American Black Duck have had several good days as well with 274 on the 13th and 333 on the 17th. American Wigeon, Mallard, Northern Shoveler, Northern Pintail, and Wood Duck have been almost daily as well, which adds some nice diversity to the count. 4 Aythya species have shown up on the count so far with Greater and Lesser Scaup being the most common and a few Redhead and Ring-necked Duck mixed in. 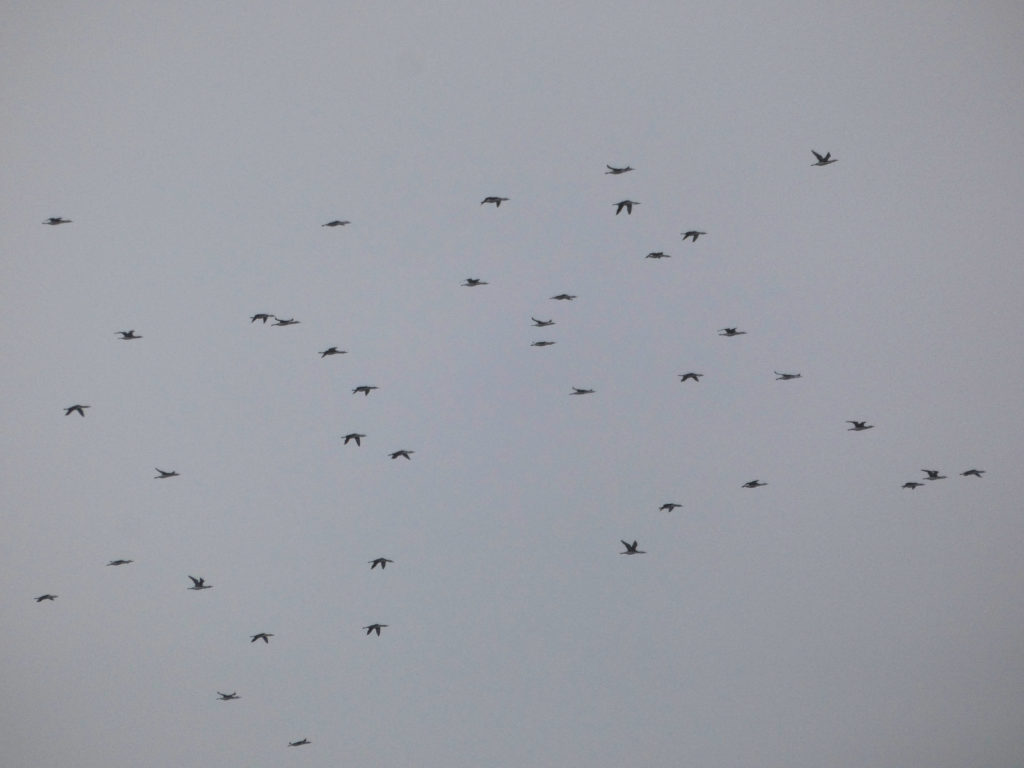 A large group of Red-throated Loons seen during a push on the 21st. Instead of forming lines like ducks or geese, loons fly in uncoordinated groups, making for quite the sight.

The birds that have been moving the most, however, have been the Red-throated Loons and the Northern Gannets. The Red-throated Loons number was creeping up for a few weeks until the 17th when 3,525 showed up, and the next several days the numbers were in the thousands. The Northern Gannets were similar with the highest count so far being 3,250 on the 22nd, counted by Tom. Double-crested Cormorant numbers are still in the thousands but seem to be dropping off, and Great Cormorants seem to be daily, with a few birds in the waters off the jetty and some migrating with flocks of Double-crested. 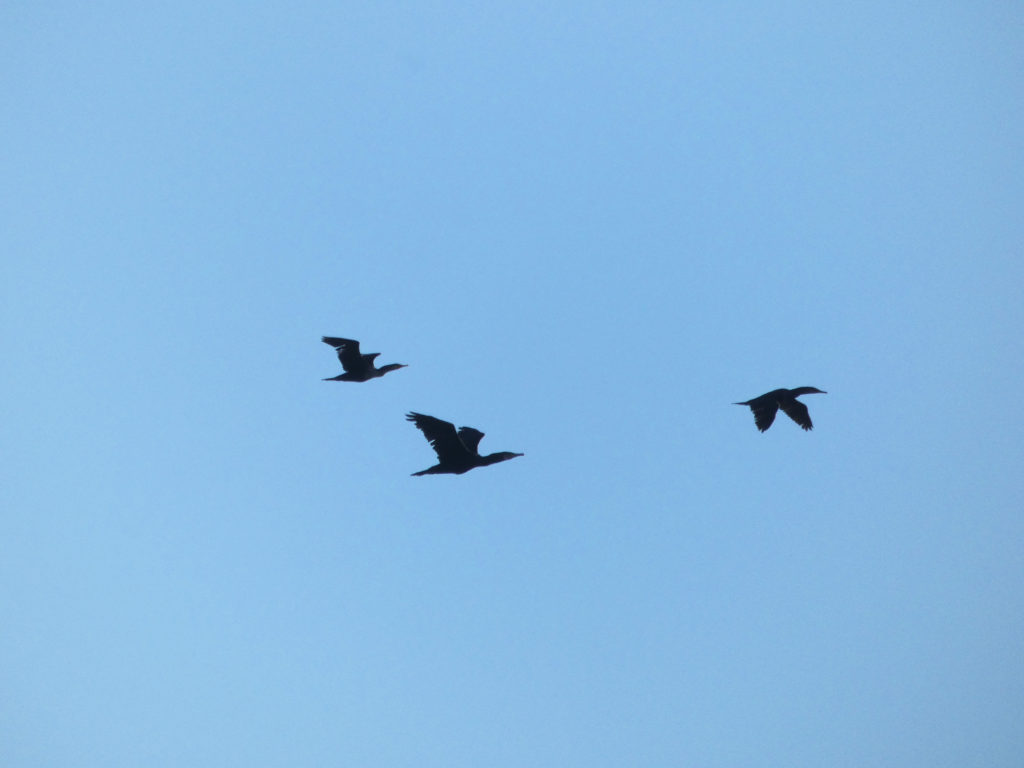 Some colder weather passerines have shown up as well including Horned Lark, Snow Bunting, American Pipit, and Purple Finch. The Savannah Sparrow (Ipswich) have been hanging around in the dunes behind the shack. With colder weather still to come, who knows what other interesting or rare birds will show up overhead or on the water at the Avalon Seawatch. Stay tuned for future updates and don’t forget to check Trektellen!

Your ticket for the: Avalon Seawatch Update: November 3rd – 23rd