The Cape May Hawkwatch, sponsored by Swarovski Optik, is two-thirds finished and the final month of the autumn season is now underway. More on that later. October, as a whole, is the peak migration time in Cape May and that was on full display this year. A total of 17,820 birds of prey were tabulated in October alone. Add that to September’s total and you are looking at a grand total of 27,603 raptors for the first two months of the season. If you think back to last season’s total, of 25,011, we are already 2,000+ ahead of that total and still have an entire month of counting left to go! It’s amazing what happens when NW winds are the predominant wind direction in Cape May. The end of October also signifies the end of CMBO’s Interpretive Naturalists on the hawkwatch platform. I would like to thank Emily Wilmoth and Erik Bruhnke for the amazing work they did this season. They undoubtedly opened the eyes of countless people to birdwatching and were the best ambassadors of the hobby I have ever seen. I will miss the comraderie.

Halloween was circled on everybody’s calendar, not for the obvious reason, but because of the forecasted NW winds for that day. It lived up to expectations and was the highlight of the week. As the sun was barely cresting over the horizon, the season’s third Short-eared Owl was spotted gliding down the dunes looking for a safe place to roost. A good omen of what was to come. Those NW winds also ushered in a new season high of both Red-tailed Hawks and Red-Shouldered Hawks with 51 and 35, respectively. As I previously mentioned, those two buteo species will continue to be seen in big numbers for the final month of the season. 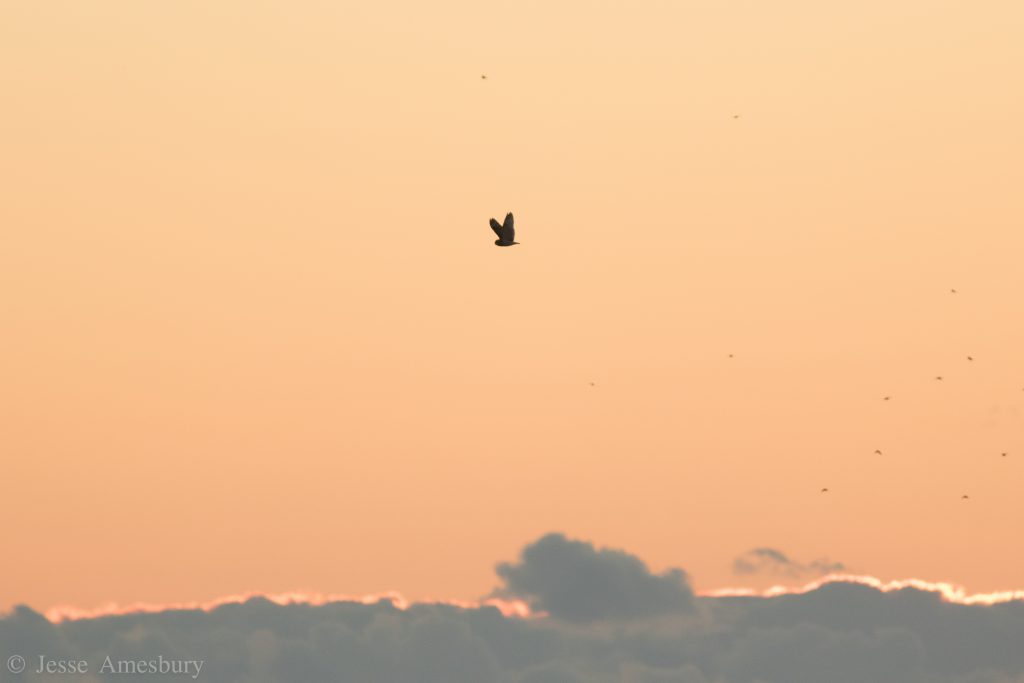 Short-eared Owls flap with a similar cadence as moths. They have very deep upstrokes and downstrokes making their flight style very unique and easy to pick out. Also, the big and blocky head is another feature to look for when identifying owls, especially when they are silhouetted.

November began with some vicious winds. November 2nd and 3rd brought winds sustained at 30mph with gusts over 50mph! Scopes were toppling over and multiple hats went sailing off people’s heads. Winds that strong actually act as a hindrance for raptor migration so naturally we saw very few hawks those days. As the winds relaxed and stopped tossing birds around as they attempted to fly, we saw more typical migration patterns. November 4th brought a trio of Golden Eagles, while November 5th brought the first Northern Goshawk of the season. As November rolls on, we should only see more of the highly sought-after species.

This week, as far as non-raptors go, winter finches stole show. A major wave of Evening Grosbeaks hit us on October 30th when 114 were observed migrating overhead. These beautiful birds were seen almost daily this week, a welcome sight for sure. Pine Siskins are also being seen by the hundreds each day. The biggest highlight of the week was 12 Red Crossbills on November 5th. At this rate, who knows what northern finches will show up next! Other rarities sighted from the hawkwatch platform included Lark Sparrow, Vesper Sparrow, Cave Swallow, and Dickcissel. 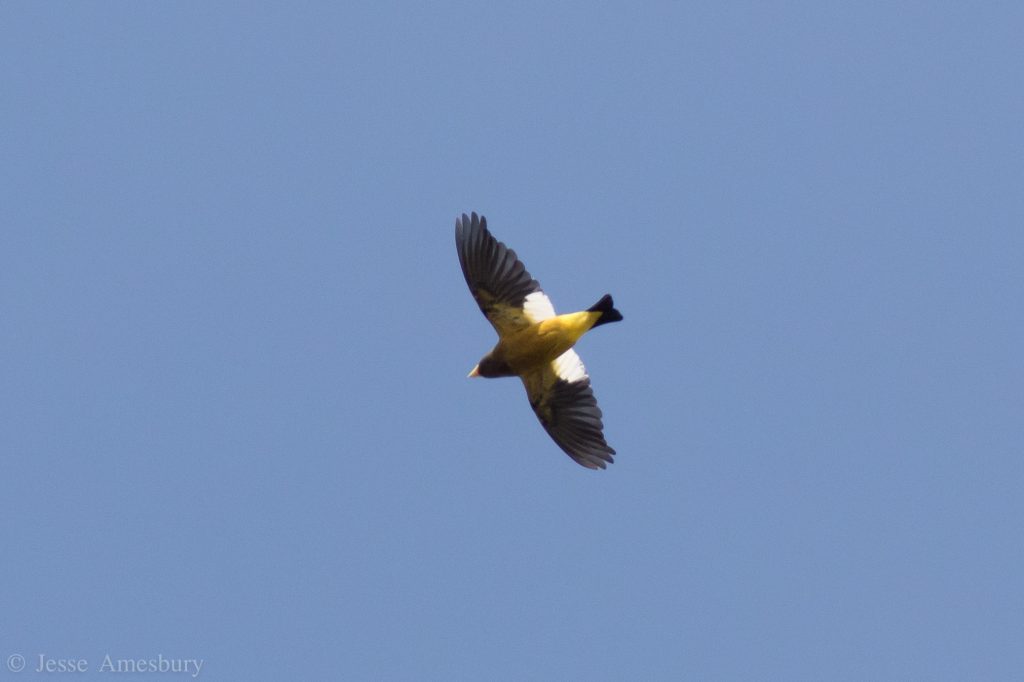 Evening Grosbeaks are a northern finch species that are irrupting south into our region. They are most often heard before they are seen so it’s best to learn their distinctive call notes and listen for them as they fly over in tight flocks.

Your ticket for the: CAPE MAY HAWKWATCH UPDATE – October 30th to November 5th