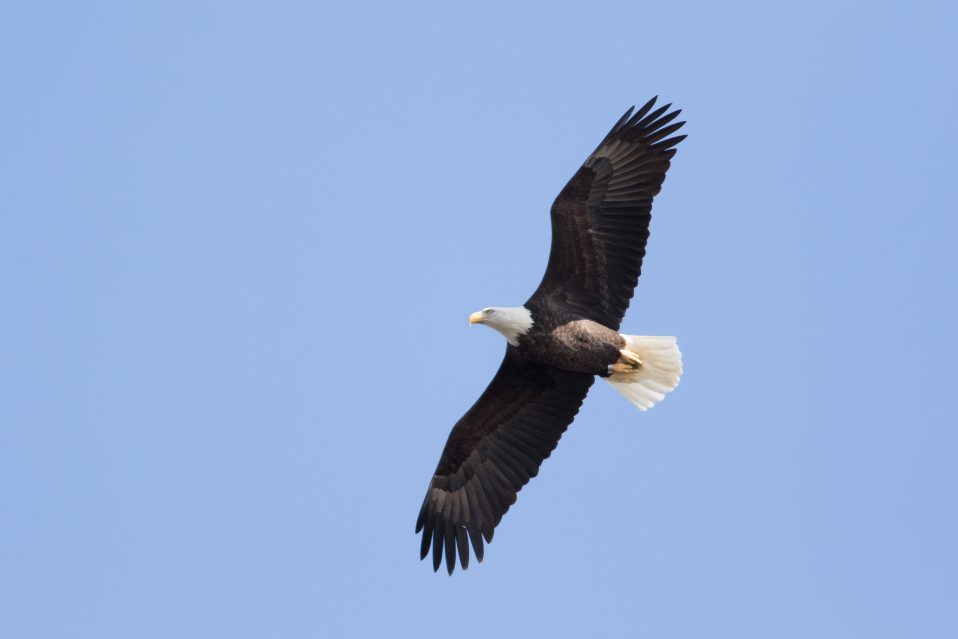 The second half of this unique 2020 season had its share of challenges but was also a boon of amazing observations. Bad weather continued through the last two weeks of October and caused us to miss a few days; despite this, these proved to be two of our best weeks on the watch.

2020 has been an exceptional year for winter finches, and the week of the 18th put the eruption on full display. Our first Evening Grosbeaks of the year came on the 19th; the birds could be seen or heard flying overhead in small numbers almost daily for the rest of the month. On Thursday the 22nd, 125 Purple Finches and a season high of 400 Pine Siskins came by the hawkwatch in noisy mixed flocks. Over the course of the week, a total of 1,010 Pine Siskins would pass the watch, marking the species’ peak.

The week of the 26th presented us with especially challenging conditions including two washouts and light rain on two of the other days. On Monday the 26th, there was thick fog and mist that limited visibility to just beyond the borders of the platform. Obviously, this is not ideal for surveying raptors, but at one point, a single mixed flock of roughly 160 sparrows flooded the platform, flying just inches off the ground narrowly avoiding me. The flock, dominated by Dark-eyed Juncos with some Chipping and White-throated Sparrows mixed in, appeared out of nowhere. For a minute or two, birds coated the gravel platform, picked seeds from the basalt cliffs, and filled every bit of vegetation; then, as quickly as they came, they disappeared back into the fog taking my hopes for a Clay-colored Sparrow with them.

The rest of the week, whenever it wasn’t raining, Turkey Vultures were moving; on Tuesday the 27th, Turkey Vultures were nearly constant. The first lines were spotted miles out to the Southeast against a backdrop of skyscrapers. Mercifully, the lines of vultures gradually shifted west toward the watch and eventually engulfed the platform. By late afternoon, their low and lazy kettles could be seen from almost every angle. With what was then a rare bit of nice weather, the Turkey Vultures ended up becoming great avian ambassadors. The effortlessness of their flight coupled with their dramatic silhouettes as they drifted southwest into the sun were enough to make more than a few visitors reconsider their stance on the species.

As we entered November, we were greeted by the first major influx of Buteos, a host of high counts for various species, and the biggest day of general migration that we would see all season.

Monday the 2nd was another strong day for Turkey Vultures with 75 passing the watch, but the most telling observations were the 30 Red-tailed and nine Red-shouldered Hawks that would pass the watch that day.

On Wednesday the 4th, the floodgates opened and seasonal high counts for nine species were recorded as nearly 11,000 birds passed the watch. The flight was dominated by miles-long bands of blackbirds that passed the watch from every direction. The totals ended up being 8,939 Common Grackles, 671 Red-winged Blackbirds, and 200 Brown-headed Cowbirds. Some robins and even a few Evening Grosbeaks were mixed in with those flocks but mostly stuck to themselves. It would be a peak day for all of the above species; we ended the day with 218 American Robins and 36 Evening Grosbeaks. The day’s songbird flight wrapped up with a season high 12 Eastern Bluebirds whistling their way past the watch. In terms of raptors, the overall total was fairly tame, but we did have a season high 49 Red-shouldered Hawks. The Buteos had finally arrived.

On Thursday the 5th, we had our first couple of Red Crossbills to pass the watch and with a season high 310 birds, American Goldfinch solidified itself as the new dominant finch passing the platform.

The week of the 8th was less eventful but had its share of highlights, nonetheless. Over 1500 Common Grackles passed the watch on Monday, and Tuesday produced the season’s high count of 15 Red Crossbills and 2020’s only White-winged Crossbill. Another 11 Red Crossbills would pass on Wednesday, and Thursday brought the first Common Redpoll of the year. With that Common Redpoll, all of the expected winter finches were accounted for.

The week of the 15th produced some “proper” hawkwatching weather with real-feel temps in the 20’s and gusts in the 30’s. This weather would earn us the peak week for Red-shouldered Hawks, a total of 107, as well as observations of a few rare and irregular species.

On Wednesday the 18th, strong northwest winds persisted all day and the birds took to a largely cloudless sky. A modest Red-tailed Hawk flight was accented by what ended up being our only real Snow Goose flight of the year. 73 Snow Geese passed the watch that day, 63 of which came in a single flock including one blue phase individual. White birds are easy to spot against the blue sky and the momentary mystery of glimpsing a flock up in the stratosphere is always thrilling. I didn’t manage to pull any Tundra Swans back to Earth that day, but I was lucky enough to get a good long look at a small group of sky high Sandhill Cranes pushing slow and steady to the south.

The Buteo flight continued on Thursday the 19th with 33 Red-shouldered Hawks and 15 Red-tailed Hawks. However, the uncontested highlight from that day was a single first-cycle Northern Goshawk that came powering through a break in the trees to the northeast. The bird continued south just above eye-level and without a hint of hesitation, dove out of sight. The next day, a late male Baltimore Oriole was seen down in the quarry feeding on the abundant Oriental Bittersweet berries concluding a week of rare sightings.

The final week of the 2020 fall hawkwatch season was representative of the season as a whole; we had some bad weather, a little car trouble, all of the regular raptors (minus American Kestrel and Osprey), and a representative of each regular winter finch. We even had a few new birds come by just at the end: two Common Mergansers, two Red-Throated Loons, and two Great Black-Backed Gulls were seen over the course of the week bringing the species total for the season to 133.

This final week also featured a host of familiar faces getting their final looks in for the season. With all of the struggles that a normal season presents, coupled with the complications of a global pandemic, this year truly could not have been possible without our incredible community. So, I’d like to wrap this article up by thanking a few volunteers and friends of the hawkwatch to whom we owe our success year after year. John Traynor, Evan Cutler, Alex Bernzweig, and Carole Hughes – you all were instrumental to the count and to the maintenance of the place itself, thank you for all that you’ve done this year and in previous years. Wayne Greenstone – thank you for your words of encouragement and for the chair that became a lifeline for me. Finally, we thank Else Greenstone for her legacy of education and stewardship, her dedication to place and to community brought many people up to the watch this year and has inspired countless people to pursue hawkwatching far and wide.

Your ticket for the: MONTCLAIR HAWKWATCH UPDATE – Late Season Summary