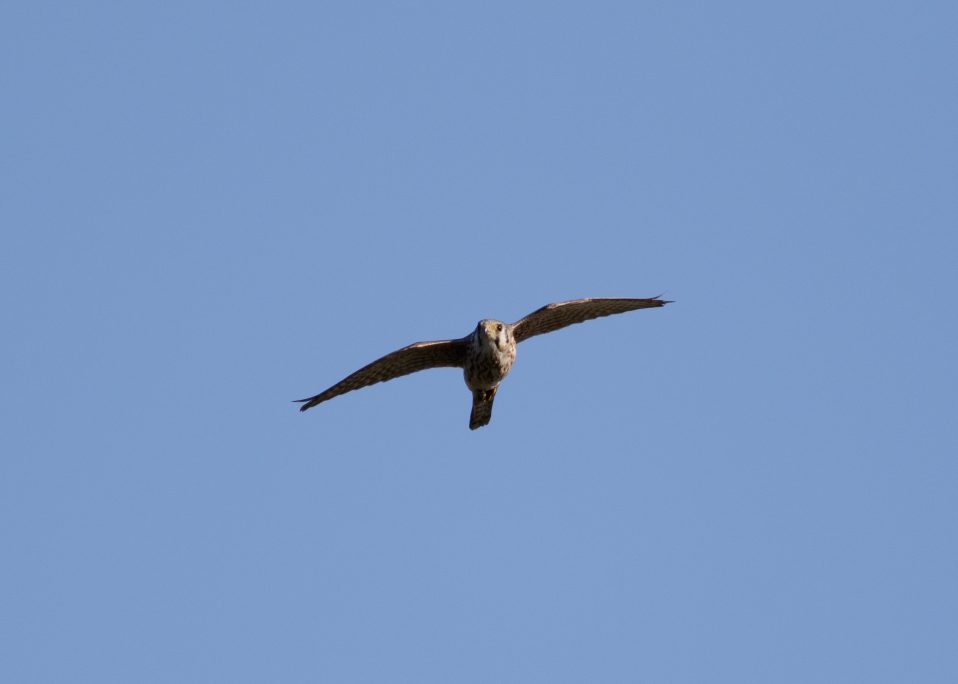 The morning of October 5th was dominated by songbirds as noisy flocks of Pine Siskins and Purple Finches bounced past the watch, a sure sign of the season. As the day went on, the finches quieted down and any shred of cloud cover left us. This made for a challenging day, much of which was spent looking straight up for sky-high sharpies and anything else I could turn up.

By mid-afternoon, all the regular raptors were accounted for and, using my chair as a head rest, I kept my eyes glued to the sky. In my scanning, two sharpies streamed high overhead in a tight line and, hoping to turn up any stragglers, I tracked their course back to the North. Suddenly my binoculars were filled with Broad-winged Hawks, mid-stream and still very high. My heart skipped a beat and I hurried to get a count. In under a minute, 89 Broad-winged Hawks – a single group of 84 followed by a group of five – had come and gone without a sound and nearly invisible to the naked eye. That one minute contributed almost 90% of the day’s Broad-wing total and nearly half of the day’s entire raptor count. It was invigorating and I felt rewarded for my efforts in the fight against complacency. Hawkwatching is an endurance activity where repetition is the rule and constant vigilance is a necessity. As slow as the watch can get, this moment made all the scanning and eye-strain worth it and further instilled a healthy fear of how easy it is to miss something big.

Tuesday and Wednesday of last week showed good raptor diversity but low daily numbers with only Turkey Vultures and Sharp-shinned Hawks reaching double digits those days. The coming winter continued to announce itself as Purple Finches and Pine Siskins kept trickling through, joined by a Ruby-crowned Kinglet, a couple Red-breasted Nuthatches, and a Savannah Sparrow.

Thursday and Friday were true fall days with howling west-northwest winds that sent swirling “flocks” of oak leaves ripping through the quarry and long shadows seemed to linger all day. Good numbers of Sharp-shinned Hawks and Kestrels along with almost 200 Turkey Vultures were the raptor highlights.

Friday, with good totals across the board, was dominated by an influx of winter finches. Purple finches (441) and Pine Siskins (293) were constantly passing overhead and stopping to pull seeds from the many birches that line the trail up to the watch.

All in all a great week at the watch.

Your ticket for the: MONTCLAIR HAWKWATCH UPDATE – October 5th to 11th